Brazil is poisoning the planet and now posing a growing existential risk. The country’s elected leader, Jair Bolsonaro, has suspended or rescinded environmental protection rules and favored his cronies in the agricultural and logging industries, who are exploiting the country’s resources with government approval or malign neglect. “This is your government,” Bolsonaro has promised lawmakers from the agriculture caucus (source: Bloomberg.com<http://Bloomberg.com>, Aug. 19, 2019; https://www.bloomberg.com/news/articles/2019-08-19/bees-are-dropping-dead-in-brazil-and-sending-a-message-to-humans). Today we will focus on just one aspect of the environmental crisis in Brazil: deliberately set rainforest fires in the Amazon rainforest.

The Amazon fires are now a worldwide threat. The Amazon is the largest rainforest in the world and has often been called “the lungs of the planet” for its role in absorbing carbon dioxide and producing oxygen – the Amazon holds vast amounts of CO2 and produces 20% of the oxygen in the our atmosphere (ScienceAlert.com<http://ScienceAlert.com>, Aug. 22, 2019; https://www.sciencealert.com/the-amazon-is-burning-at-a-record-rate-and-parts-were-intentionally-set-alight). Thus this great watershed plays a major role in moderating the global climate. It also plays a key role in generating rain to water South American crops and is home to a million people (representing some 400 indigenous groups) and a tremendous diversity of plants and animals.

Fires in the Amazon (and across Brazil) have made headlines around the world in recent days. Brazil has had more than 72,000 fire outbreaks so far this year, an 84% increase over the same period in 2018, according to data from the country’s National Institute for Space Research (INPE) (The Guardian, Aug. 23, 2019; https://www.theguardian.com/environment/2019/aug/23/amazon-fires-global-leaders-urged-divert-brazil-suicide-path). Of those fires, more than 40,000, or 56%, have occurred in the Amazon (New York Times, Aug. 23, 2019; https://www.nytimes.com/2019/08/23/world/americas/brazil-military-amazon-fire.html).

So far this year, the equivalent of 228 megatons of carbon dioxide has been released by Amazon burning, according to the Copernicus Atmosphere Monitoring Service. This is the highest level since 2010 (BBC, Aug. 23, 2019; https://www.bbc.com/news/world-latin-america-49450925).

In July record Amazon deforestation was recorded, and the graph below depicts the severity of the problem: 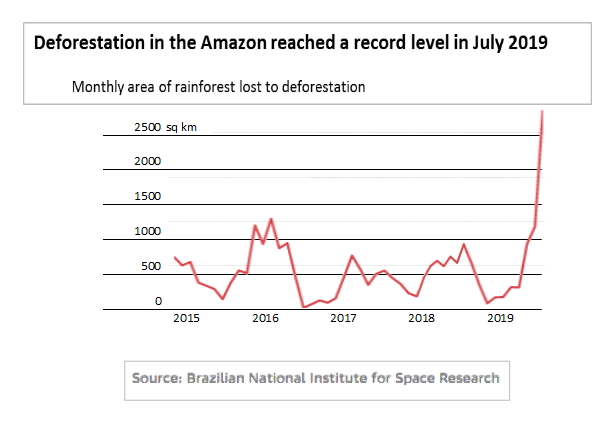 The Brazilian Amazon lost more than 1,330 square miles of forest cover during the first seven months of this year, a 39% increase over the same period last year (New York Times, Aug. 23, 2019; https://www.nytimes.com/2019/08/23/world/americas/brazil-military-amazon-fire.html).

The spread of the fires, which are burning during the dry season, accelerated after farmers reportedly announced a coordinated ”Day of Fire” on August 10, with the intention signaling their support of the Bolsonaro government’s policies (The Independent, Aug. 22, 2019; https://www.independent.co.uk/news/world/americas/amazon-rainforest-fires-jair-bolsonaro-ngo-san-paolo-a9075071.html).

In response to the dramatic increase in fires, in early August Bolsonaro fired the head of the space agency, INPE (Space.com; https://www.space.com/brazil-space-agency-leader-dismissed.html). Bolsonaro has further placed suspicion for setting the fires “mostly on the NGOs” that oppose his policies for the Amazon, though he has admitted that farmers and loggers may also be suspects. In any case, he says, Brazil lacks the resources to fight the blazes. “We are in chaos,” he said, as he took questions from journalists – whom he then blamed for a lack of responsibility in reporting (The Independent, Aug. 22, 2019; https://www.independent.co.uk/news/world/americas/amazon-rainforest-fires-jair-bolsonaro-ngo-san-paolo-a9075071.html).

Then on Friday, Aug. 23, under mounting international pressure, Bolsonaro did an about-face, promising to deploy the army to fight the fires and enforce environmental regulations. His pledge was met with suspicion by NGOs that protect the Amazon, which pointed out that the Bolsonaro government has worked concertedly to weaken those regulations and open the Amazon to wider development (New York Times, Aug. 23, 2019; https://www.nytimes.com/2019/08/23/world/americas/brazil-military-amazon-fire.html).

On Monday, Aug. 26, President Macron of France announced that the Group of 7 had agreed on a $22 million aid package to help Brazil and its neighbors fight the Amazon fires. Then on Tuesday, Brazil rejected the aid package. Government ministers said the money was not needed and accused foreign powers of wanting control of the Amazon. There was another about-face on Wednesday, Aug. 28, when the money was accepted again. In any case, Greenpeace France had described the G7’s response to the crisis as “inadequate given the urgency and magnitude of this environmental disaster” (BBC, Aug. 27, 2019; https://www.bbc.com/news/world-latin-america-49479470).

Effective Wednesday, August 28, responding to pressures, Bolsonaro banned the use of fire to clear land in the Amazon basin for 60 days (CNN, Aug. 29; https://www.cnn.com/2019/08/29/americas/brazil-amazon-bolsonaro-fire-ban-intl/index.html). That said, Bolsonaro had already significantly weakened the agency that enforces Brazil’s environmental regulations (Reuters, Aug. 28, 2019;  https://www.reuters.com/article/us-brazil-environment-ibama-exclusive/exclusive-as-fires-race-through-amazon-brazils-bolsonaro-weakens-environment-agency-idUSKCN1VI14I). The world will have to wait and see whether the ban actually makes a difference in the rate at which the Amazon is burning. Sixty days is hardly time enough for the air to clear.

For the Amazon, for humanity, and for life on earth generally, the stakes are high. Robinson Meyer, writing for The Atlantic, sums up:

“The Amazon rainforest does, in some sense, belong to Brazilians and the indigenous people who live there. But as a store of carbon, it is fundamental to the survival of every person. If destroyed or degraded, the Amazon, as a system, is simply beyond humanity’s ability to get back: Even if people were to replant half a continent’s worth of trees, the diversity of creatures across Amazonia, once lost, will not be replenished for roughly 10 million years. And that is 33 times longer than Homo sapiens, as a species, has existed.” (The Atlantic, Aug. 24, 2019; https://www.theatlantic.com/science/archive/2019/08/amazon-fires-are-political/596776/)

Kaushik Basu, who is a nonresident senior fellow writing about the global economy and development for the Brookings Institution, concludes, “The crisis in the Amazon is a stark example of the damage that can be done when governments bow unequivocally to business interests. It also highlights an increasingly common phenomenon: the cynical manipulation of anti-corruption efforts to undermine democracy and advance an authoritarian political agenda.” (Project Syndicate, Aug. 28, 2019; https://www.project-syndicate.org/commentary/how-fighting-corruption-can-serve-authoritarianism-by-kaushik-basu-2019-08)

Jair Bolsonaro’s willingness to develop the Amazon is, however, not the only factor in play in the rainforest. To understand another driver of the crisis, we have to following a trail of beans – specifically soybeans. US exports of soybeans to China and US farmers who grow soybeans have both fallen victim to the Trump-Navarro trade war with China. China is looking elsewhere for its soybeans and increasingly to Brazil. (See https://www.bloomberg.com/news/articles/2019-08-16/china-ramps-up-brazil-soy-imports-as-u-s-trade-war-worsens.) Brazilian exports of soybeans to China are up 30%, while American exports of soybeans to China are down 49%. (South China Morning Post, May 17, 2019; https://www.scmp.com/business/companies/article/3010480/us-china-trade-war-has-been-boon-brazils-soybean-farmers-can). In 2019, despite a dip in Chinese demand occasioned by an outbreak of swine fever (soybeans are heavily used in animal feed), China has still accounted for 72.9% of Brazil’s soybean exports (Reuters, May 15, 2019; https://www.reuters.com/article/brazil-soybeans/brazil-soy-exports-to-china-fall-13-in-2019-report-idUSL5N22R87Y).

As the trade war with China has escalated, dominoes have fallen, both in the American heartland where farmers struggle for survival (CNBC, July 20, 2019; https://www.cnbc.com/video/2018/07/20/soybean-farmer-we-may-not-survive-trade-tensions-with-china.html) and in the Amazon rainforest, where forests are burning so that Brazil can supply China. Had soybeans never been touched in a trade war, we would see far fewer fires now in the Amazon. Soybeans and Trump tariffs were invoked under a national security law when there was no real national security threat. There is a real one now. Trump-Navarro trade policies have created a global and national security issue.

Other drivers of deforestation include cattle ranching. Brazil is the largest exporter of beef in the world, to the tune of $6.7 billion, so its own demand for animal feed is immense. While clearing the Amazon is enabling profits now, however, continued deforestation may tip the region into a much drier savanna, driving losses in the longer term. Longer-term concerns both in Brazil and worldwide outweigh the short-term benefits of opening new land for agriculture in the Amazon basin. (Vox, Aug 30, 2019; https://www.vox.com/energy-and-environment/2019/8/30/20835091/amazon-rainforest-fire-wildfire-bolsonaro).

While our focus here is on the fate of the Amazon rainforest and its implications for our collective fate, we will be wise to remember that what is true of the Amazon rainforest is also true of Alaska’s Tongass National Forest and other places. A clearcut replanted is no forest ecosystem restored, not for many, many years. Not only does wildlife find itself homeless; the soil life that helped to sustain the forest dies off with the trees. It doesn’t magically reappear. Mature trees sequester far more carbon than young trees do; so replanting takes a long, long time to replace a mature forest’s carbon-sequestering capacity. Cut the trees and less rain falls across the land as weather systems move inland, and heat and cold are more extreme on the ground. The forest’s accumulation of topsoil ends, and erosion carries what the forest has slowly created away. (Loss of topsoil globally is another mounting concern.) In short, Brazil’s crisis can provide us an example of what not to do.

As citizens and investors, we can pressure corporations doing business with or investing in Brazilian agriculture or the destruction of the Amazon to clean up their supply chains or divest. Shareholders have some power although it may be limited. Commercial boycotting of Brazil is another limited option. US Government sanctions now used routinely with foreign governments and individuals will require US government decisions that politics may inhibit. The US has sanctioned a lot of folks and countries. Would we be willing to extend that policy to the Amazon fires?

The Bolsonaro regime is keenly aware of its reliance on global governments, corporations, and other financial actors to prop up Brazil’s economy. Thus we have a significant opportunity to affect the outcome of this crisis if economic penalties are used. But the history of economic sanctions is mixed at best. Maduro is an example. He is still in power. Kim is another example.

One thing Americans can do is seek information on US investment in the Amazon and publicize who is investing and where. At least disclosure has a stigma effect.

Query: Does the Bolsonaro-approved Amazon burning equate with Kim’s missile tests? Some would argue it is a more serious threat.

Bottom line: The world is injured, and planetary risk has risen. We can only speculate about how much the trade war has inspired Chinese capital to a Brazilian replacement of America’s soybeans. Remember the economics teaching about the unintended consequences of government policies. Maybe we are seeing that lesson play out now in the Amazon.