Last quarter we focused our 2Q 2018 municipal credit commentary on two SCOTUS (Supreme Court of the United States) rulings. One allows states to collect tax on out-of-state internet sales while the other restricts public unions from requiring that non-union public sector employees pay agency fees to contribute to the cost of collective bargaining and other activities through fair-share agreements. We consider both rulings positive for municipal credit (http://www.cumber.com/scotus-two-major-rulings-with-positive-implications-for-municipal-bond-credit-quality/). In particular, the ability to collect online sales taxes should help financial operations. A study by the National Conference of State Legislators (NCSL) and the International Council of Shopping Centers (ICSC) estimates that total U.S. uncollected sales and use taxes increased to almost $26 billion in the year 2015. Of this $26 billion, more than $17 billion in uncollected taxes were projected to be from electronic sales. http://www.ncsl.org/research/fiscal-policy/e-fairness-legislation-overview.aspx

Regarding the sales tax ruling, some states are working toward collecting sales tax retroactively; however, a bill entitled the Online Sales Simplicity and Small Business Relief Act has been proposed that would ban retroactive imposition of a sales tax on out-of-state internet sales, delay implementation to January 2019, and establish a small-seller exemption for companies with gross annual receipts below $10 million, (compared with the $100,000 threshold or 200 transactions per year in the case of South Dakota). The proposed legislation, if passed, should not be a burden, because states have already been adjusting to the lower collections as internet sales have increased over the years. Regarding the fair-share agreements, it may take some time for the SCOTUS ruling to have an effect on public sector-union coffers and political influence. We noted in our Q1 commentary the abundance of teacher strikes (http://www.cumber.com/q1-2018-municipal-credit/). They continued this quarter, with strikes or threatened strikes in a number of Washington state school districts and a vote by the teachers of Los Angeles Unified School District to strike if state mediation does not result in a satisfactory contract.

In addition to the SCOTUS rulings, Q2 was notable because all states passed budgets on time or nearly on time – even the states notorious for passing late budgets, such as Illinois, Connecticut, and Pennsylvania. Common threads for this phenomenon include election-year politics, good revenue growth driven by a generally improved economy, and the acceleration of tax collections in 2017 due to the Tax Cut and Jobs Act.

A number of states’ rainy day funds are not up to pre-recession levels, leaving analysts and others to worry what might happen in the next downturn. S&P released a September 2018 report in which they subjected state financial operations to the stresses of moderate and severe recessions and then compared 2018 reserves to expected drawdowns. Only 20 states had reserves sufficient to cover loss of revenue and increased social service spending during a moderate recession, and overall the states showed an average revenue shortfall of 9.9%. S&P went further and made adjustments for dependence on more cyclical revenue streams (capital gains taxes for example), level of social-service spending, and fixed costs including pensions and OPEB. After the adjustments 14 states were considered low risk, 21 moderate, and 14 elevated. S&P contends, however, that states have the capacity to make fiscal adjustments in response to a downturn. S&P also notes, though, that there were 19 state downgrades from the beginning of 2016 through August 2018, compared with just four upgrades, and observes that this ratio is abnormal this far into a recovery. The downgrades could reflect increased reliance on income taxes, eroding tax bases, rising entitlement costs, and liability growth. 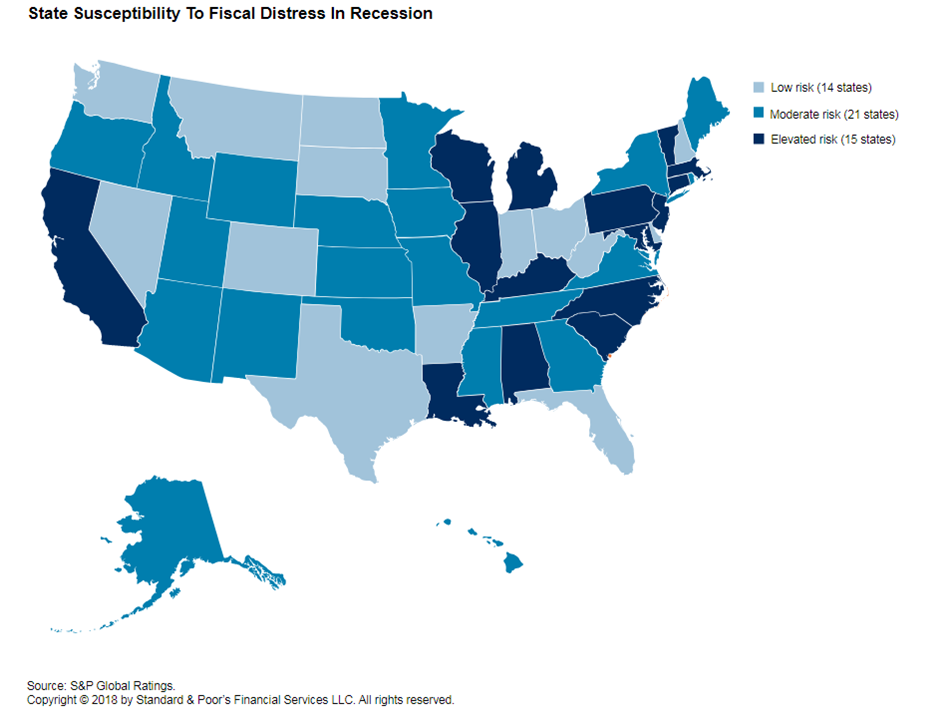 The National League of Cities’ annual City Fiscal Conditions report, a survey of 341 of its members, found that while cities’ fiscal health is not yet declining, growth is slowing, and there are cautionary signals that echo previous economic downturns. Cities are facing wage pressure as well as shortfalls in required and/or needed contributions to pensions and healthcare. Although revenues are not in decline, they grew only 1.25% in FY 2017 and are expected to stagnate in FY 2018. Expenditures grew 2.16% in FY 2017, with growth for FY 2018 budgeted at 1.97%. The results are uneven. Communities in the Midwest are faring worse than those in other regions. Smaller cities, too, have a poorer fiscal outlook than their larger counterparts do. The report attributes these differences to population declines and industrial losses that began before the Great Recession but were accelerated by it. And not surprisingly, the report found 35% of finance officers report seeing negative fiscal impacts associated with the elimination of tax-exempt advance refunding bonds. According to the NLC, this critical municipal finance tool saved taxpayers more than $2.5 billion last year.

This picture may sound dire; however, municipal analysts are generally a conservative group. In Moody’s annual US Municipal Bond Defaults and Recoveries, 1970–2017, released in July, the rating agency notes that municipal bankruptcies have become more common in the last decade (think Puerto Rico) but are still rare overall. The five-year municipal default rate since 2008 was 0.18%, compared to 0.09% for the entire study period. This figure compares with the global corporate five-year default rate of 6.6% since 2008. The ten-year municipal default rate is 0.17%, while the corporate default rate is 10.24%.

The Municipal Analysts Group of New York (MAGNY), a constituent group of the National Federation of Municipal Analysts (NFMA) staged a luncheon program at the beginning of summer, in which panelists discussed what the next recession may look like. Their conclusion? It depends. Is weakness going to be on the consumption side and affect sales taxes, or will it be on the employment or stock market fronts and affect income taxes? Recently, oil prices have been predicted to rise, so states that are dependent on energy taxes may benefit from additional revenue.

Given the risk of future revenue declines, it is important to know where the risks could rise to determine whether a municipality is preparing for those risks and striving for structural balance. Are revenues at least equal to expenditures, and are those expenditure needs being realistically addressed? When evaluating an issuer we like to see flexibility in the form of conservative assumptions built into a budget. This prudent practice generally means overestimating expenses and underestimating revenue, so that the entity can end the year with a positive balance, contributing to the buildup of a rainy day fund. Rainy day funds are used to address revenue shortfalls or unexpected expenses. Conservative budgeting and the willingness to cut spending or increase revenues are characteristics of strong financial management. This principle is true for the issuers of general-obligation bonds as well as revenue bonds.

Why do we always have a section on states in our quarterly municipal credit commentaries? States provide funds and services to municipalities and institutions in the state, so what is happening at the state level can have implications at the local level. Additionally, as I mentioned in my inaugural commentary at the firm (http://www.cumber.com/3q2016-municipal-credit-its-never-boring-in-muniland/) – wow, has it been two years already?), state ratings are now more volatile than they were in the past.

Since June 2016 there has been only one quarter that has not seen a state rating change, and that was the first quarter of 2018. Historically, state ratings were fairly stable (with some exceptions, such as California). The variability in the past few years is unusual and is attributable to rising pension costs and OPEB expenses, political gridlock, and/or exposure to energy-related revenues.

Some states’ ratings are naturally more cyclical because those states depend more heavily on a cyclical revenue stream. For example California, which is AA-/Aa3 rated now, has been as high as AAA and as low as A because it is a high tax state with high-income earners, which creates swings in income and budgeting. This history contrasts to that of Georgia, which has been rated Aaa by Moody’s since 1974. Fitch has rated the state’s GOs AAA since 1993, while S&P gave its highest rating to the Peach State in 1997.

After no changes in Q1, the changes seemed to accelerate in Q2 and Q3. In Q2 there were three downgrades, one upgrade, and a few improvements in outlooks or trend. In the third quarter all rating actions were positive! 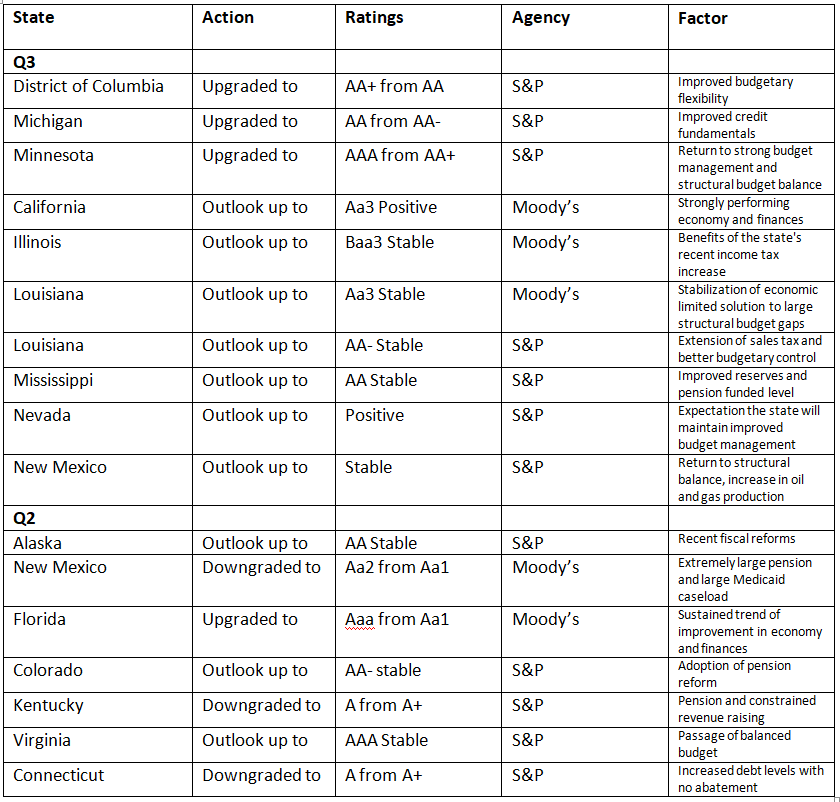 Finally, our thoughts are with those in North and South Carolina who are still dealing with the aftermath of Florence. In addition, many around the country and the world were affected by fires, volcanoes, and tsunamis this quarter. The initial costs to communities affected by natural disasters can be great; however in the U.S., after a natural disaster, there is usually a surge of economic activity that continues for an extended period as people and communities rebuild and money (insurance and federal aid) and workers flow into the area, increasing income tax and sales tax revenues to municipalities. That economic flip side, however, is not much immediate comfort for those who have lost homes and other property, pets, livestock, income, and for some, even family members. Our hearts go out to those whose lives have been impacted.