This Sunday morning, we would like to whisk you away from the world of politics for a few minutes.

First, we’ll consider the outsized consequences of acting without thinking. We thank Bill D. for forwarding this 30-second clip:

“Why we don’t do fireworks at Christmas,”

Second, we offer, as a counterpoint, an extraordinary human achievement made possible by thinking everything through to implement a marvelous creative vision, as performed on France’s Got Talent:

For more about Italian artist Johannes Stoetter, his work, and his process, see this fascinating report on CBS Sunday Morning: https://www.youtube.com/watch?v=TMO2lSuE3L4.

Next, we invite you to consider a classic journey through the stages of quarantine. 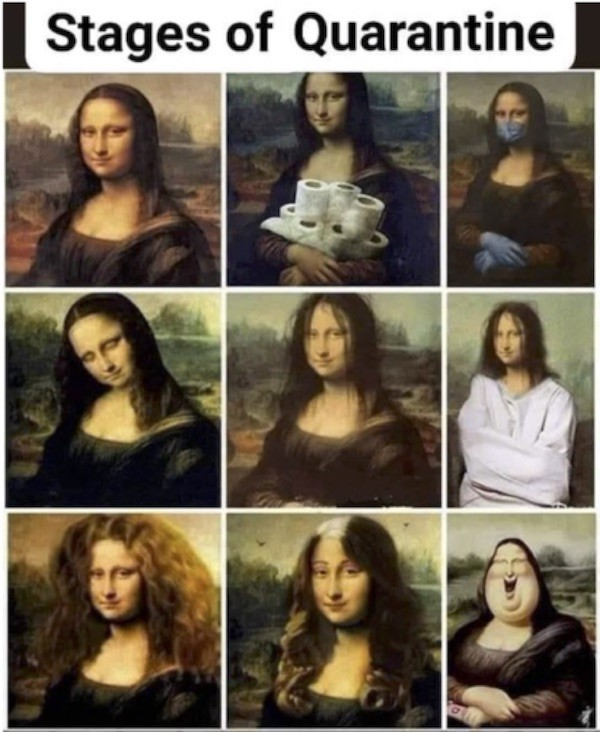 Last, lest we forget that we face a serious pandemic, here’s a link to “Places We’ve Never Been,” episode 38 of Dr. Michael Osterholm’s weekly podcast on COVID-19: https://www.cidrap.umn.edu/covid-19/podcasts-webinars/episode-38. Dr. Osterholm is director of the Center for Infectious Disease Research and Policy (CIDRAP) and has been tapped to serve on President-elect Biden’s coronavirus task force. If you don’t have the hour to listen to the entire podcast, at least please read the following excerpt from the transcript. Osterholm details the ways in which the COVID-19 pandemic has torn up the maps we charted using flu pandemics of the past. (We have lightly edited the transcript, mainly to add paragraphing for easier reading, since reading text without paragraphing is a mental task akin to scaling a climbing wall without key handholds and footholds.)

“Michael Osterholm: [00:16:16] I’ve shared with you on multiple occasions that one must have a real sense of humility in dealing with this virus. I have studied this virus, its every move, unlike virtually any other infectious disease I’ve ever worked with in my lifetime. Some days I go to bed thinking about what its next move will be and how to anticipate it. There are days when a part of me has this terribly painful satisfaction of realizing that something I said four or five weeks ago becomes reality today. I tell you that because I’m at a point right now where I don’t quite know where we’re going.

I believe the underlying premise, vaccine is coming, and that’s surely going to have an impact. But let me again kind of tell you a story of what’s happened with this virus in a way that most people haven’t really looked at it or realized what was going on. If you look back to last spring, particularly in that time period of March/April, we saw parts of California, to some degree Seattle was still in that area, clearly Chicago, Detroit, to some degree Atlanta, and most of all the New York metropolitan area and some on the East Coast – were all really houses on fire. We asked the whole country go into lockdown so that we could flatten the curve. Many areas said “Why? We have not had a case of this virus infection throughout the last 6, 10, 12 weeks.” And that was true.

Again, we were applying more of an influenza-like model, that six to eight weeks, in and out. Well, what happened, though, was as those April cases began to curve down from those peaks of looking at, you know, in the thirty-two thousand cases a day, it began to continue to decrease across much of the United States; and that what we saw around Memorial Day, however, was a substantial increase, particularly in the upper Midwest. Minnesota had its first big peak at that time. And those cases climbed through the post-Memorial Day period. And we went from that twenty-two thousand and started to come down. And then all of a sudden something happened – in Southern California, Arizona, New Mexico, right across, Texas, the Gulf states, particularly Georgia and Florida, and we saw this huge increase in cases such that we had that big peak in July of this past year, rising almost to seventy thousand cases reported a day. Then the case numbers started coming down again. We got to Labor Day, and we were talking now about somewhere in the neighborhood of twenty-four to twenty-six thousand cases reported each day. Now, again, that was still high compared to what we were seeing back in the spring.

The Midwest began to demonstrate a very different pattern. Starting in October, we saw cases increasing from Montana to the Dakotas, Kansas, Nebraska, Iowa, Minnesota, Wisconsin; and the case numbers just continue to increase and increase, such that by the end of November, we were watching the number of cases grow to among the highest reported incidences in the world, right here in the upper Midwest. Some of the states like Minnesota put in place major public health efforts to try to reduce transmission. Other states were doing something but less than we did.

And then all of a sudden around the time of the second week of November, case numbers started to drop in all those states, every one of them. And it was a situation where I can’t understand why the case has dropped as they did. I have to tell you honestly that I did not see a Thanksgiving surge in those states, even though we had substantial travel. Possibly that happened, and the drop would have occurred even quicker in cases than it did, but nonetheless we saw a substantial drop in cases.

But at the same time that those cases were dropping, we began to see a major increase in cases, guess what, the same Sun Belt area again. Southern California, Arizona, which at the time of this recording has the highest rate of cases in the US, less so in New Mexico this time. But look at Texas, go right across the coast to Georgia and Florida, and it’s kind of like deja vu all over again. New York this time has had its case numbers increase substantially. We’ve seen the same thing in other parts of the East Coast.

What’s happening here is we’re seeing these evolving and rotating increases in cases in geographic areas and then decreases. And I don’t know why. And I don’t think anybody does. In fact, most people, I don’t think, have yet recognized this pattern of what’s happening. Surely the concept of social networks that I talked about before may play a role, where there are smaller subsegments of the population where transmission has really taken off; and if you can dampen those, those few rods and just that part of the reaction, you can really drop case numbers down. But the reason I share this with you is we tend to grow terribly complacent in an area that may have been at, like Minnesota, eighty-five hundred cases a day newly reported here just five weeks ago, six weeks ago. And now we’re down to sometimes fifteen-hundred/sixteen-hundred cases, the load on the hospitals has been reduced dramatically, and we let our guard down because we’re done. We’re in a place I’ve never been before. Because guess what I’ve seen happen? Just in the last five to seven days in all those same states that I just talked about in the upper Midwest, where case numbers are decreasing, every one of them have taken a turn up again. Now I don’t know if those terms will be sustained. I don’t know if it’s a function more of the holiday reporting season when things come through. We’ll follow that carefully.

But this is really one of the most challenging aspects of understanding this pandemic. What is this virus doing? How is it doing this? It’s not about season. I mean, look at we’ve had these peaks and valleys in the springs in the summers in the falls now in the winter. So it can’t be about that. What it’s telling me is stay tuned. And you can never let your guard down. You can’t. Because just as soon as that big peak goes to a bottom, right now without widespread vaccination, I think it’s going to go right back up. And what it’s pointing out, by the way, for all those that assumed herd immunity was reached last spring in some of these areas, [is] oh, no, there’s a lot of human wood left to burn for this coronavirus forest fire. And it’s doing it. It comes back. Go ask the people right now in Southern California. Ask them what’s happening through a number of the Southern states.

So we have a real challenge on our hands, trying to figure out what’s going on and what that’s going to mean going forward as we’re trying to roll out our vaccine programs, and where are we going to see areas most hard hit? And what’s that going to mean for planning for health care, resources, staffing, and what I would consider to be another psychological challenge of, oh, no, here we go again. So this is clearly a really concerning issue right now that I hope that we start to pay more attention to. I see every night on the television, they’ll go to the one hot spot like L.A., which is right now in terrible shape, horrible shape, and somehow the rest of the country that’s not like that says “Well, that’s not us, that’s not us.” But what we’re finding is it could be us again tomorrow. And that’s going to be an ongoing challenge. That’s why vaccine has to be our savior.”

[In the podcast portion immediately following, Dr. Osterholm discusses Covid mutation variants and their implications for vaccines. The entire transcript is available, along with the podcast, at https://www.cidrap.umn.edu/covid-19/podcasts-webinars/episode-38.]

Dear Readers, we wish you a safe Sunday and fortitude for the week ahead. Here are three thoughts for the road:

“People often say that motivation doesn’t last. Well, neither does bathing – that’s why we recommend it daily.” — Zig Ziglar, author

“Life is a shipwreck, but we must not forget to sing in the lifeboats.” — Voltaire

“Optimist: Someone who figures that taking a step backward after taking a step forward is not a disaster, it’s more like a cha-cha.” — Robert Brault, author