In Amsterdam in 1632 , a talented young artist, Rembrandt Harmenszoon van Rijn, was commissioned to produce five etchings of biblical scenes. Rembrandt was born in 1606 and this was his breakthrough engagement, at age 26. His patron was Stadtholder Frederik Hendrik, Prince of Orange, the Dutch sovereign.

Rembrandt was inspired by Rubens’s altarpiece in the Antwerp Cathedral, but his first etching failed because of acid damage to the plate’s surface. Thus the image below is from the second plate, which was finished in 1633 and printed many times and in various states as it was retouched and maintained. The catalog reference is Bartsch 81 II. Notice the shafts of “divine light” in the print. Also notice the inscription at the bottom in which Rembrandt claimed the “privilege” of a copyright. Note that Rembrandt claimed that privilege just twice, and both of those prints are in this commentary. This pair are the only two large etching plates created by Rembrandt. The other 300-plus Rembrandt plates were smaller.

Many argue that “The Descent from the Cross” is Rembrandt’s finest etching. Others would point to the later “Descent” by moonlight or to the “Three Crosses.” Rembrandt scholar Christian White wrote that after the first plate failed, Rembrandt, “as a determined artist with an ego and reputation to protect, decided to attempt the image a second time on a new plate. Thereby titled ‘Descent from the Cross: Plate II,’ Rembrandt’s gamble beat the house and the result was magnificent.” Rembrandt scholar Dorrance T. Kelly notes that “in spite of the elaborate and conventional nature of the image at first glance, Rembrandt ultimately avoids the heroic form of Rubens’s dead Christ; instead, he confronts us with the brutal physical reality of handling the sagging weight of a dead body as the men work together to bring it down from the cross.” 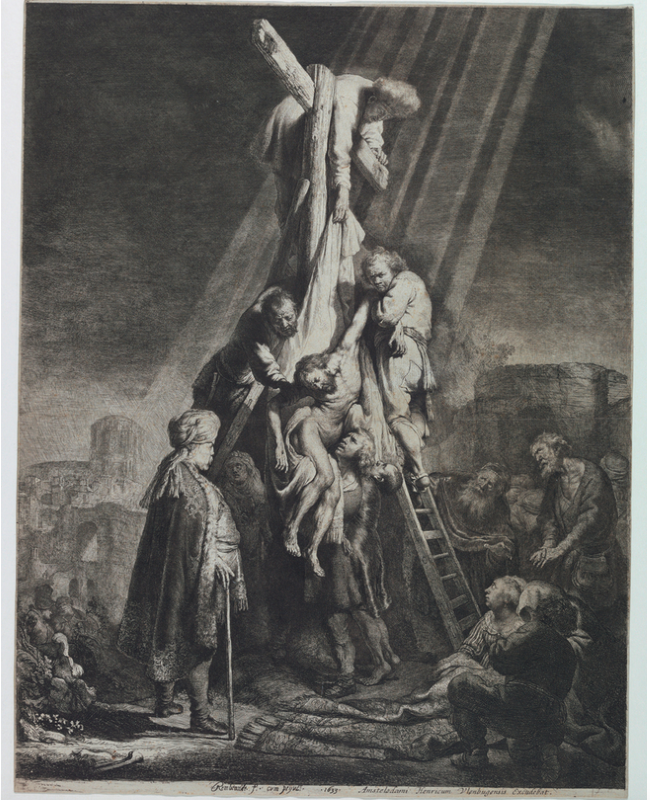 Please also notice the classic depiction of Christ’s visage above. Christ has a full, dark beard. Rembrandt used this visage in the many etchings of Christ in the various biblical studies he created during his career. Only in the second etching (below) did he stray from that portrayal.

In 1635–1636, Rembrandt completed his only other copyrighted large plate, entitled “Christ Before Pilate.” Bartsch catalog reference is 77. Rembrandt depicts the scene in dramatic form. Note the faces, which show the diversity of the world as Rembrandt knew it. He was intent on a portraying a global Christ being sentenced by a troubled Pilate, whose pose is presented so as to show his dilemma about ordering the crucifixion. Dorrance T. Kelly suggests that Pilate, “with one hand [you see the hand behind the right shoulder of Pilate] seems to push off the soldiers and with the other to reject the rod, as if suggesting Christ’s innocence.” Also note the absence of Asian faces. Rembrandt didn’t see them in the harbors at the time, so he didn’t know to include them.

Lastly, note the lightly bearded visage of Christ. Some argue that Rembrandt made Christ’s features into a self-portrait. Readers can compare for themselves the famous etching with a self-portrait Rembrandt painted when he was 34, which can be viewed here: http://www.alaintruong.com/archives/2017/12/25/35988277.html

What happened to Rembrandt between 1633 and 1635? How did he now see himself two years after he had completed “The Descent from the Cross?” Was this portrayal of Christ ego or temerity? Or was it a form of self-pity? Did Rembrandt see himself in some spiritual and sacrificial role? 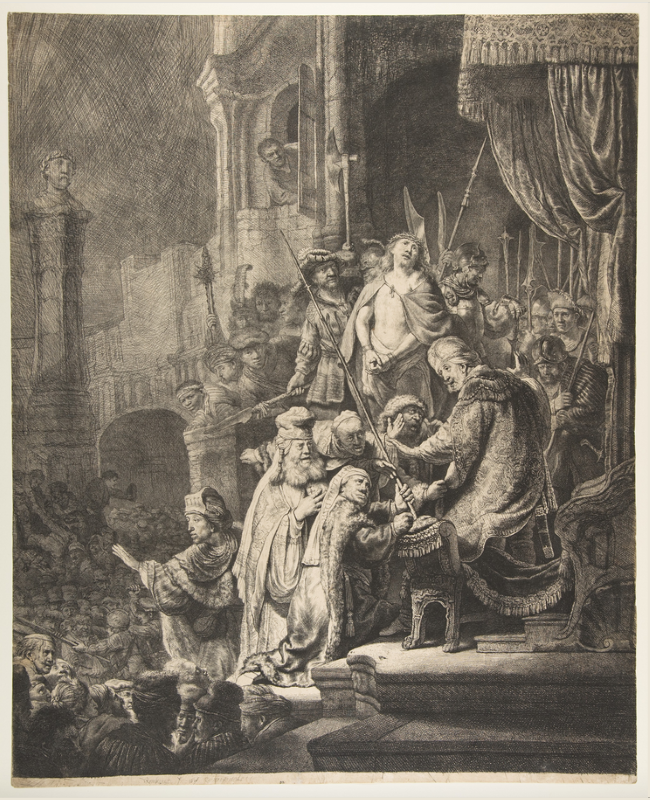 We wish all readers of all denominations and all spiritual preferences a contemplative and calming holiday weekend as we each work our way daily through these extraordinary times.