Bob Brusca, Chief Economist of Fact and Opinion Economics, sent a research note entitled “Why Trump is nagging Powell.” He included this chart. Note the dates. 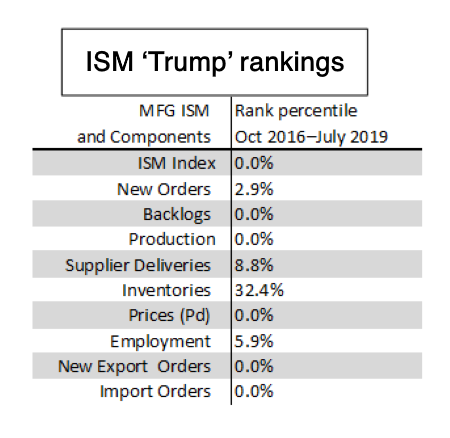 The table above ranks the change in the ISM (Mfg.) and its components from their levels on the eve of Trump’s election to the current month. The ISM and other indicators initially jumped after Trump’s election, but now all that exuberance is gone. The ISM is the weakest it has been since November 2016. So are order backlogs, production, prices, new export orders, and import orders. There is a somewhat better ranking on inventories (not a good result, since inventories are still relatively high while output is on its lows). Nothing in that table will be liked by Trump or his economic team – his bragging rights are “slip-sliding away.”

We thank Bob Brusca for giving us permission to use his chart. We agree with his assessment.

Dear Readers, if you want to see the toll taken by the tariff war, here it is. Remember, no one wins in a trade war. Both China and the US are losing. Both are blaming the other side for the deterioration. Before this trade war started, the data in the chart pointed toward growth. Now it has reversed. There is little prospect for improvement unless and until there is a reversal in the trade war.

For months we have written about this issue. Trump’s supporters have hammered us and accused us of political bias. We want to remind them that we supported the original tax cuts, and we strongly supported the repatriation program that Trump originated and that he got passed in the first of Trump’s two congressional sessions. Now Trump is embroiled in various and sundry nastiness contests, and the upcoming election will mean a stalemate for legislative initiatives.

Meanwhile, Trump has squandered all the gains from the tax cut and repatriation and reversed the benefits by following the broad tariff approach advised by Peter Navarro. We have written and still believe that Navarro is sinking his president, and we watch as the defenders of Trump’s policy are digging in.

Markets are proving this assessment correct. And market agents see right through Trump’s blame-the-Fed and blame-Powell Twitter storm. Powell didn’t make the mess that is shown in that chart; Powell and the Fed have to navigate monetary policy because of it. Powell didn’t create the tariff wars. And Powell did not create the global economic weakness from trade war effects, nor did he promote the negative-interest-rate policy that now has $14 trillion in debt trading at an interest rate below zero.

I’m not defending the Fed’s communication. They have made a few gaffes, and they could be much clearer in their messaging. Trump’s blistering attacks on them doesn’t help anything.

Also, the Trump attacks, which call for lower interest rates on the capital-market side, ignore the reduction of interest earnings on household savings. Thirty million American households watch their interest earnings go down every time the Fed cuts rates. Actually, the number may be much larger than 30 million. The metrics used to estimate the effect of a lower interest rate on savings are debated. But no one debates that when you cut the earnings on savings you cause consumers to retrench out of fear and raise their savings to protect themselves. That is the effect.

What would the political fallout be if millions of Americans realized that the Trump call for lower Fed rates, which is directed at Powell, is also a Trump call for a lower amount of interest to be paid to every American with a CD or a savings account? Why hasn’t media commentary focused on the savings/earnings side? Why only the capital-market side?

Anyway, we’re in a summer of intensity. The Fed outlook is still unclear and uncertain. The Trump Trade War has just ratcheted up another notch. The economy is grinding along. The world looks beleaguered.

We have a cash reserve. Thanks to the Fed and to President Trump, who gutted the cut he badgered Congress to win, the earnings on that cash just declined a quarter point.

Camp Kotok is in Maine in a few days. The conversations will be fierce. We will report on them.