The muni bond market has been on a tear so far this year. Not only have yields dropped, but they have dropped relative to US Treasuries across the board.

The chart below shows where we are now and where we were at the start of the year. 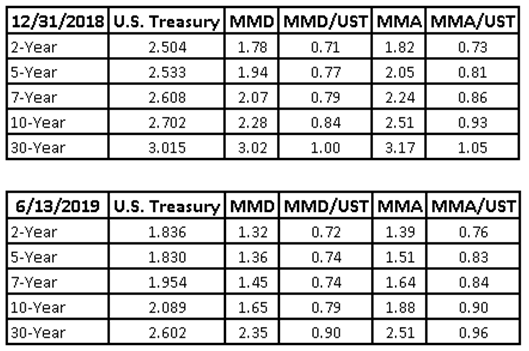 The big squeeze has been caused by the twin tentacles of increased demand and decreased supply.

We know that the demand has been fueled by the provisions of the 2017 tax bill. The new tax code’s removal of the state income tax and local property tax deductions has left few other areas in which income can be sheltered from federal taxes and has pushed demand in high-tax states into high gear.

Here we compare a general market yield curve from October 31, 2016, to New York and California curves at that time and further compare them to the same juxtaposition recently. We can see that the difference between these high-tax states and the national curve has increased greatly as bond demand has grown (and bid down the muni yield curve across the board). 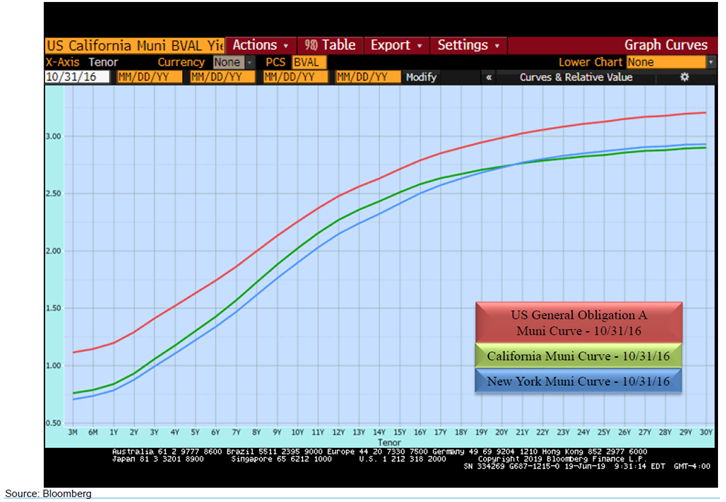 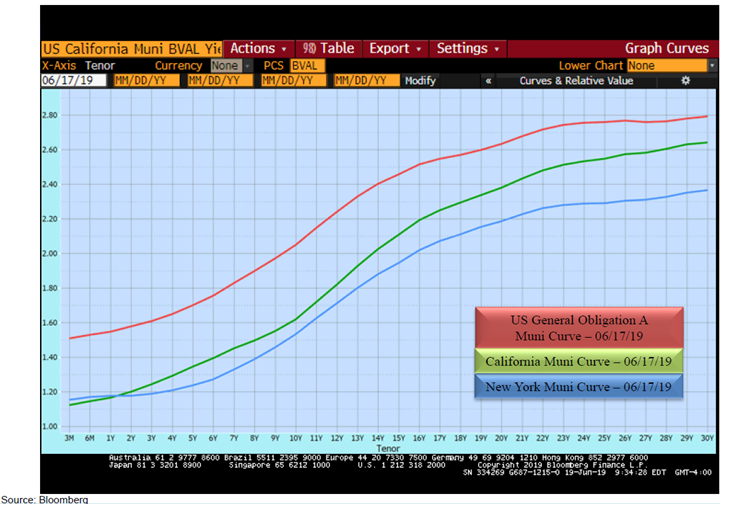 The fact that the limitation on deduction of mortgage interest has been reduced to $750,000 from $1,000,000 has been another contributing factor, in our view. At the margin, a person thinking of buying a more expensive home, when confronted by the mortgage deductibility issue, would stay put and instead own more municipal bonds as opposed to buying more real estate with a mortgage that is not deductible.The supply sideHere are the monthly supply numbers for the last four years (2019 year to date)

We can see the large supply bulges in 2016 and 2017. Both were caused by large amounts of advanced refunding supply. Record low interest rates in the first seven months of 2016 (when the 10-year Treasury touched 1.30% after the Brexit vote) spurred on that year’s supply bulge, whereas the passage of the tax bill late in the next year expanded 2017’s bulge. The bill prohibited advance refundings going forward, so naturally municipalities started to price as many advance refundings as they could bring to market (starting before the bill was even passed in November and December of 2017). Issuance has been running roughly 25–28% less ever since. One result is that issuers are using 5-year calls instead of the standard 10-year call the market was accustomed to. In a market where yields have dropped, this has meant that durations have gotten shorter at a time when investors want them to be longer to capture price gains in a declining yield environment.In the graph below we can see that issuance from 2014–17 has changed significantly, trending lower. 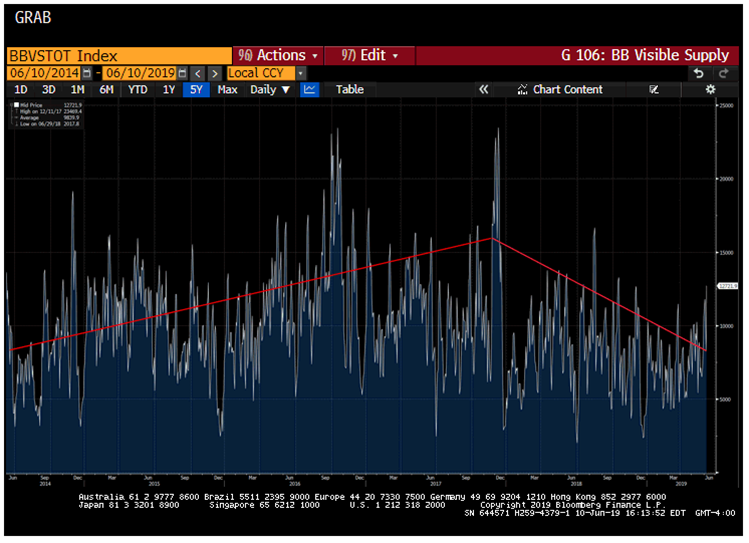 In our opinion, municipal bond pricing as well as supply has moved to a new normal. What could change this?One of the items would be an infrastructure bill. Right now, given the makeup of Congress and the focus on tariffs and trade, this outcome does not seem likely. We don’t believe that an infrastructure bill – if passed – would include an interest subsidy like the Build America Bonds (BABs), which enjoyed a 35% subsidy from the federal government. There is a lot of reluctance to replicate that model, given that the subsidy has fallen to the mid 20% levels due to various sequestrations. A more likely structure would have the federal government offering a direct subsidy on various projects.

Another item could be a return of advance refundings. Our own thoughts are that Congress did not save any money by prohibiting advance refundings, as the necessity to now do them with taxable bonds renders advance refundings much more expensive, if not impossible. We believe advance refundings were a tried and true way for municipalities to reduce debt-service costs and would like to see them return. We give this possibility a very low chance for passing anytime soon, but it can be brought up in other years. If it does come back, expect supply to explode – at least at these levels, where 4% bonds issued just last year could be candidates to be prerefunded to their first call date.

We remain cautious on the bond market for a number of reasons.

Inflation remains around 2%. It has not dropped markedly since yields have fallen from last October’s high. Below is a graph comparing the ten-year US Treasury yield to core CPI over the past five years. After breaching the 1% level last fall (when we expanded durations), it has since fallen to almost zero. Our premise is that the economy is NOT heading into recession, so we feel that some semblance of normalcy will return to this spread. 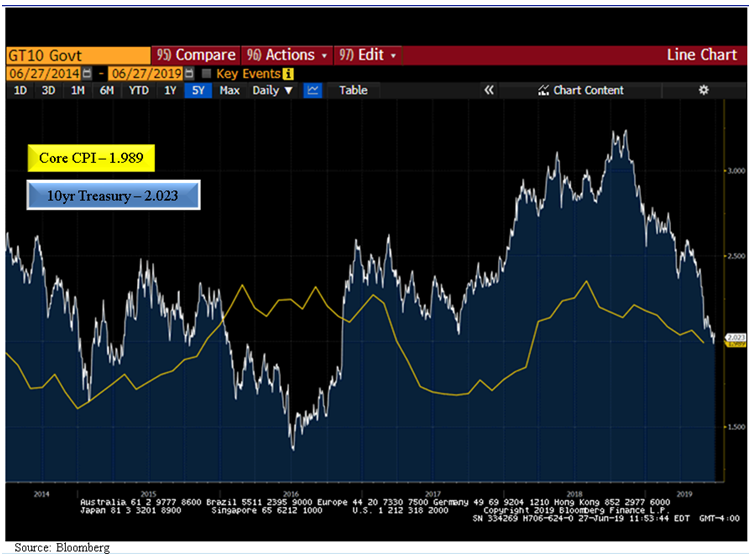 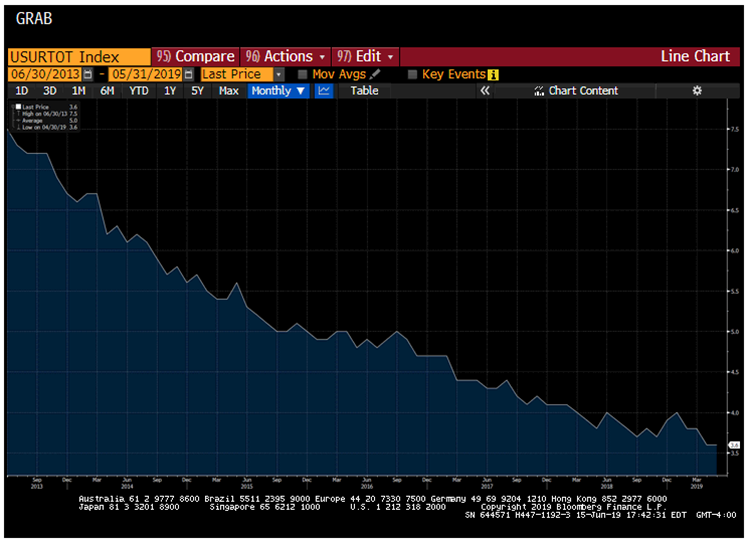 We believe that some wage growth will pick up at these levels and eventually work its way into the general inflation rate. Though lower in the last two months, labor participation rates remain in an uptrend.The market is forecasting that the Federal Reserve will cut short-term interest rates a total of twice this year. Markets have a notably lousy record of forecasting actual Fed actions, and we think that is the case this time, too. We believe the Fed is happy to try to remain data-dependent, conscious of the fact that the economy is doing well and that there is not that much ammunition in the fed funds rate to cut short rates unless truly needed.

Summing up, munis are clearly in a brave new world from a pricing and supply standpoint. They are no longer as tremendously cheap as they were last fall. The low supply, combined with low rates, steady inflation, and low unemployment, keeps us in a cautious mode.