“In practice, the Fed has never adopted operating procedures designed to control reserves in order to use the money multiplier relationship to control deposits.” (Goodfriend and Hargraves, “A Historical Assessment of the Rationales and Functions of Reserve Requirements,” Source: https://www.richmondfed.org)

In response to the pandemic crisis, the Federal Reserve has cut the federal funds rate target to 0%–.25%; instituted a series of at least eleven special programs to support financial markets, including a facility to support the government’s paycheck protection program; begun an aggressive asset purchase program; expanded its central bank liquidity swaps program; and, in March, cut reserve requirements to zero. The Fed has also made clear that interest rates will be low for a long time – until the economy starts to really recover and, by implication, until inflation really starts moving back to its 2% target. The nagging question at this time, and still unaddressed, is what the Fed’s exit strategy is and what it will do about the elephant in the room – its balance sheet.
Coming out of the Great Recession, the Fed’s balance sheet peaked at $4.516 trillion on January 14, 2015, before drifting down to $3.760 trillion on August 28, 2019, after the Fed stopped rolling over maturing securities. It took a full four years and seven months to decline by only $756 billion, during which the FOMC pursued a zero-interest rate policy. But when the COVID-19 pandemic hit, the Fed again expanded its balance sheet, which peaked at $7.169 trillion on June 10, 2020, before slipping back to $6.965 trillion on July 23, 2020. Interestingly, this most recent decline was due almost entirely to a drop in its central bank liquidity swaps program, which peaked on June 6 at $445 billion before falling to $122 billion on July 23. If it took more than four and a half years for the balance sheet to decline to $3.76 trillion through the runoff of maturing securities, what strategies might the Fed employ to bring its balance sheet into a more normal equilibrium once the economy recovers, and how long will that process take? We are potentially looking at many years before equilibrium is reached, and there is the very real possibility that interest rate policy alone may not be sufficient to control the expansion.
What the Fed should not do is turn to asset sales. With less than $50 billion in capital and surplus, significant asset sales in a rising-interest-rate environment would generate capital losses that would have to be recognized, either by writing down capital or by creating a negative asset account into which to book losses that was negotiated by Chairman Bernanke with the Treasury during the Great Recession. If capital losses were incurred, then remittances would be curtailed until the losses could be recovered, posing problems for the Treasury, not to mention creating bad optics as far as domestic and international financial markets were concerned, should the losses in the negative asset accounts exceed the Fed’s capital.
For this reason, the Fed will likely have to employ other strategies to restore normalcy. There is a strategy that would buy the necessary time and provide the necessary policy flexibility for the Fed to normalize its balance sheet, and it could do so employing several complementary tools without having to resort to asset sales and without short-run costs to the banking system.
The key to managing the dynamic reduction in the Fed’s balance sheet over time lies in a timely and calibrated use of reserve requirements along with judicious use of differential interest rates on required versus excess reserves as a complement to the interest rate policy tools currently being employed. As the initial headline of the report linked above implies, neither the existing Board of Governors, nor the members of the FOMC, nor their staffs have had any practical personal experience in the use of reserve requirements as a policy tool, because reserve requirements have not been used as a monetary policy tool since WWII.  Indeed, as the next chart shows, because reserve requirements historically have been low and excess reserves minimal at best, making changes in reserve requirements has always been judged by Fed policy makers and economists to be a blunt, unwieldly, and impractical instrument compared to making marginal changes in outstanding excess reserves using changes in the overnight funding rate. This mindset has dominated economists’ thinking about reserve requirements as a useful policy tool. The relationship between excess and required reserves changed dramatically, however, after the Fed expanded its balance sheet in 2008 in response to the Great Recession. The ratio of required reserves to total reserves declined from about 95% before the Great Recession to only about 5% in its aftermath. 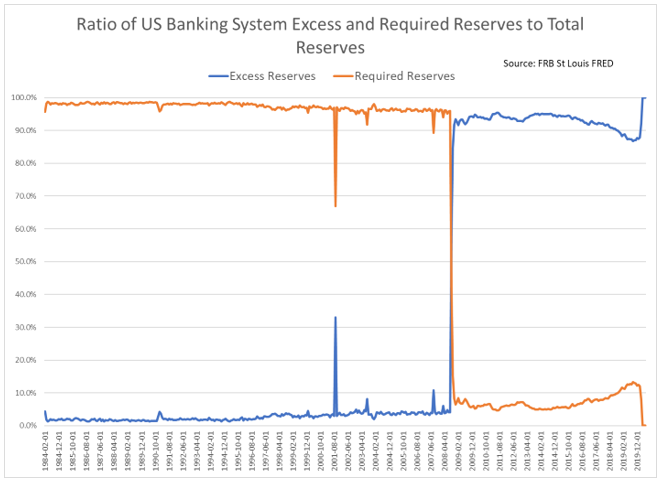 As a result, in a fractional reserve system, with required reserves set at zero, the Fed is sitting on a time bomb because of the potential increase in the money supply and the inflation that it implies. In a fractional reserve system, the potential increase in the money supply, in the limit, is equal to 1/reserve requirement times the volume of outstanding reserves. For example, if reserve requirements were 5%, then a dollar of reserves would support up to a $20 increase in the money supply. At zero, there is no limit or constraint. (As an aside, it is interesting to note that the Fed provided little convincing justification for the elimination of reserve requirements in March of this year.)
Right now, banks are sitting on over $2.732 trillion in excess reserves. However, they are not lending them out at an alarming or dangerous pace at present, in part due to the lack of loan demand; in part due to regulatory liquidity constraints; and in part due to the fact that, even with a low rate on reserves of only .10%, which is only two basis points below the rate on a one-month Treasury bill, that is still a riskless rate of return without the transactions and accounting costs of going back and forth into the Treasury market.
What the Fed should do now, as part of a multi-step process for putting in place a workable risk-management exit strategy, is the following:
The above proposals would expand the Fed’s tool box with a system of reserve requirement policy levers that would not impose costs on existing depository institutions, especially if the program were started in the near term. Banks are voluntarily holding a huge volume of excess reserves, so converting these to required reserves by imposing a non-binding constraint while still paying interest is effectively no different than what is currently in place, incentive-wise, since the rate is presently the same on both excess and required reserves. The expanded tool kit would include differential reserve requirements, differential interest rates paid on excess and required reserves, the federal funds target rate, the discount rate, the repo rate and open market operations, plus forward guidance in terms of a commitment to relax required reserves at a pace consistent with the Fed’s growth, inflation, and unemployment objectives. This policy approach avoids any risk that credit creation, the money supply, and inflation will get out of hand. In addition, the Fed would have no need to worry about selling assets and incurring all the risks and the public scrutiny that sales would entail. The Fed could announce the program now, clearly laying out how it would be implemented in coordination with the decline in the Fed’s balance sheet. Some might be concerned that it is too soon to announce such a program and that an announcement of one might cause problems in financial markets; but the reality is that now is perhaps the best time to announce the program, when reserves are plentiful, the increase in requirements would be costless to the affected banks, and the Fed’s other liquidity programs are in place and functioning.
Robert Eisenbeis, Ph.D.
Vice Chairman & Chief Monetary Economist
Email | Bio