We now know that the first person who contracted a mysterious pneumonia in Wuhan actually fell ill on December 1, almost two weeks earlier than Chinese authorities initially claimed.  (See “Did China downplay the coronavirus outbreak early on?” https://www.vox.com/2020/1/27/21082354/coronavirus-outbreak-wuhan-china-early-on-lancet, and “Wuhan seafood market may not be source of novel virus spreading globally,” https://www.sciencemag.org/news/2020/01/wuhan-seafood-market-may-not-be-source-novel-virus-spreading-globally).

That information is based on a study, conducted by Chinese researchers, of the first 41 cases, published in The Lancet on January 24: https://www.thelancet.com/journals/lancet/article/PIIS0140-6736(20)30183-5/fulltext 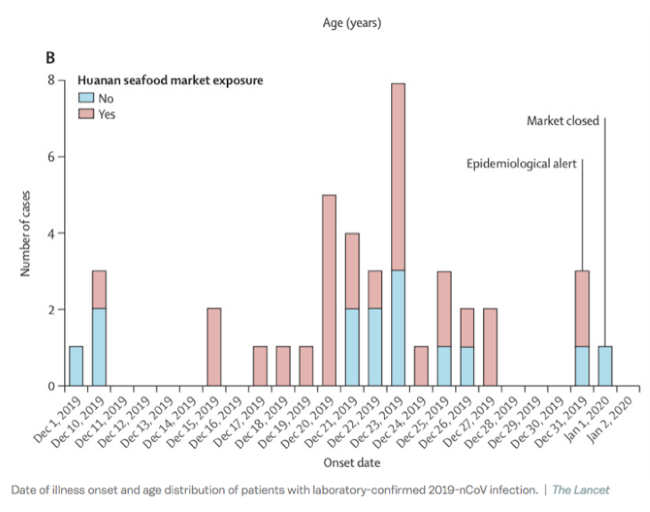 China Central Television (CCTV), reporting on the results of a preliminary investigation by a team of experts from the National Health Commission, reported the first case to have been observed on December 12, not December 1 (“New Coronavirus Responsible for Wuhan Pneumonia, CCTV Says,” http://www.sixthtone.com/news/1005058/new-coronavirus-responsible-for-wuhan-pneumonia%2C-cctv-says). Authorities focused on the connection between infections and the seafood market and downplayed the possibility of human-to-human transmission and thus of broader risk, notes Julia Belluz, writing for Vox: “Did China downplay the coronavirus outbreak early on?” https://www.vox.com/2020/1/27/21082354/coronavirus-outbreak-wuhan-china-early-on-lancet.

We now know that the first China trade deal phase one media “leak” was to Fox News on December 12. (https://www.foxnews.com/politics/us-china-reach-phase-one-trade-deal-source-says) 0

We now know that the Wuhan authorities tried to silence the information about the virus in December. Dr. Dali Yang, William C. Reavis Professor of Political Science, University of Chicago, and nonresident senior fellow, Chicago Council on Global Affairs (https://en.wikipedia.org/wiki/Dali_Yang), reported this via Twitter:

“The costs of stability at all costs: On January 1, well before the Wuhan #coronaravirus spread en masse and more than a week before the virus was identified, the Wuhan police announced that it had dealt with eight people for spreading untruthful information about ‘Wuhan viral pneumonia” in accordance with law. Official news reports of the time say that the Wuhan police wanted to remind people it would be unrelenting in dealing with those who concoct and spread rumors. This news item was prominently carried on xinhuanet.com/2020-01/01/c_1….

“China Central TV and major outlets as well as online. It had a chilling effect on those who saw the early signs of a then emerging epidemic. This crackdown was clearly part of a coordinated effort by the Wuhan leadership. Earlier today the Wuhan police tried to lighten the effect of its earlier action by saying that the eight were given ‘education and criticism’ but were ‘not detained’. It also revealed that the eight had shared information with others that various (yicai.com/news/100483362…).

“Wuhan hospitals had SARS cases. It turns out that all eight were doctors; at least one of them had contracted the #coronavirus while treating patients. A commentator from the Supreme People’s Court weighed in that the eight were giving their opinion to the best of their knowledge. After all, the #coronavirus was only formally declared identified on Jan 9, 2020.

“Imagine [if] the Wuhan authorities had acted on the information from these professional doctors to contain the emerging epidemic rather than punishing them. Alas, this is one more example of the growing costs of the Chinese leadership’s preoccupation with stability maintenance. For background on this: Dali L. Yang, ‘China’s Troubled Quest for Order: Leadership, Organization and the Contradictions of the Stability Maintenance Regime,’ (daliyang.files.wordpress.com/2013/08/yang).…

“Dr. Li Wenliang, one of the eight medical professionals who were admonished by police in in late Dec 2019, became infected with the #coronavirus and tells his experience and his own battle with the #2019-nCoV pneumonia. (sixthtone.com/news/1005150/r…). In a related development, Sixth Tone had prepared a story on the eight earlier this month, but that story was quashed by China’s censors.” (https://twitter.com/dali_yang/status/1222570017239203841?s=21)

We now have evidence that China’s authorities beyond the city of Wuhan and Hubei Province knew early on of this developing health threat. Here’s an example where Taiwan, in December, threatened to pull its women’s soccer team from playing in Wuhan due to a growing health risk:

“Taiwan’s football association said on Wednesday the sports administration had asked the AFC in December to change the location due to fears about the health of players.

“If the venue was not changed then Taiwan’s team would not participate, the association added.” (https://www.reuters.com/article/us-china-health-soccer-idINKBN1ZL0BX)

How did Taiwan know about the virus outbreak? Clearly, the information was circulating in and beyond Mainland China.

The outbreak in Wuhan was also on the radar of the University of Minnesota’s Center for Infections Disease Research and Policy (CIDRAP) by the end of December, and so it must have been on the CDC’s radar at that point as well. (“News Scan December 31, 2019,” http://www.cidrap.umn.edu/news-perspective/2019/12/news-scan-dec-31-2019)

We now know that in early January there was a flurry of trade deal updates and media releases leading up to the signing of the phase one agreement in Washington on January 13. See for instance “China Trade Deal to be Signed: Sell the News?” https://articles2.marketrealist.com/2020/01/china-trade-deal-to-be-signed-sell-news/#.

We now know that in early January the virus risk story was spreading rapidly, as we have shown in our initial extensive coverage of the outbreak: http://www.cumber.com/cumberland-advisors-market-commentary-coronavirus-1-with-updated-death-toll/.

We know that on the day the trade deal was signed (January 13), the first report of a coronavirus case outside China (in Thailand) appeared in the news: https://en.wikipedia.org/wiki/2019%E2%80%9320_Wuhan_coronavirus_outbreak_by_country_and_territory#Thailand.

We know that within two days of the signing, the Chinese authorities started disclosure and reporting , and the story has been a worldwide one since. See our chronology: http://www.cumber.com/cumberland-advisors-market-commentary-coronavirus-1-with-updated-death-toll/.

Did China purposefully suppress information so it could hurry up and get a trade deal signed? Is this only coincidental timing? Or was there a conspiracy in China at the highest level? I will leave it to readers to fill in the rest of the questions. I will further leave it to readers to guess at the counterfactual of what would have happened if the virus information had been immediately disclosed and containment and preventive measures had been launched promptly.

Note: I asked John Newton, chief economist at the Farm Bureau in Washington (https://www.linkedin.com/in/john-c-newton-econ/), what the impact of the agricultural part of the trade deal would be as it related to the virus outbreak. He replied with this comment and the following chart:

“The agreement phases in soon, and the slowdown in the economy and closing of ports could impact their ability to make purchases. There is a clause in the agreement that covers unanticipated shocks like this.” 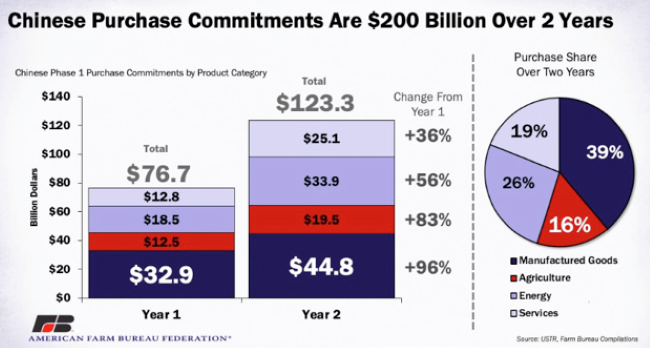 Dear readers: I’m not sanguine about this outbreak. It is much more widespread than SARS or MERS. It has dangerous characteristics, including a long incubation period during which a person is contagious but shows no symptoms. Though we hope the outbreak can be contained, a pandemic looks increasingly likely. (“Wuhan Coronavirus Look Increasingly Like a Pandemic, Experts Say,” https://www.nytimes.com/2020/02/02/health/coronavirus-pandemic-china.html)

We will write separately on the economic outlook changes we expect. And we are asking, what did our US government know, and when did it know it? That is a much harder question, and it needs serious inquiry. Remember, the Xi Jinping government and the Donald Trump government had reasons to get the trade deal agreed to quickly. There is no way to confirm any conspiracy between the two countries, but we do know that information about the virus outbreak was available in December and early January. And we do know that that information was not mentioned in the trade-deal narrative. Is Chinese silence a conspiracy? Is American silence a conspiracy? Or was the Trump administration simply not yet paying close attention to this emerging threat when it closed a phase one trade deal with China?

Now, every time I raise any issue that doesn’t praise Trump, I get a flurry of accusations about a “rant” or my one-sidedness. And when I support a Trump administration initiative, I get a blistering response from Trump detractors. Such is the situation in America today. Thoughtful responses are welcome as long as they are civil. Not-civil replies are deleted, and the writer is permanently blocked from our lists. Dialogue is predicated on civility.

In the interest of showing two sides on the coronavirus issue, I asked for and received Steve Wasserman’s permission to quote his morning note. He usually writes favorably about Trump’s initiatives and their benefits. Sometimes I agree with him, and other times I don’t.

Here is his February 2, Sunday morning take. Steve knows I am not as sanguine about the virus risk as he is. I am, however, simpatico with his view that the selloff is a buying opportunity. Steve writes,

“If you ever needed a definition of black swans, it is called Corona Virus. Out of the blue, totally unexpected but major disruption. Clearly China has major problems with this. Nobody can go in or out and that will last maybe two more months. No way to know. No American or European in his right mind is going to China for any reason for a long time. The damage to business and trade in China will be extensive. Factories in many areas are shut down for at least another week or more. Nobody has any idea yet how long, or how bad this will be. So what does all that mean to the US and the stock market. We saw on Friday what fear and ignorance can do with a black swan. It is clear that the US will not be materially at risk and the CDC and all US health agencies are all over this. Nobody wants to be responsible for any outbreak in the US. So the panic in the market will pass, China will be very badly impacted and emerging markets will get crushed as China materially slows buying commodities until this passes and business gets back up and running. There are a lot of US companies that do not do business in China nor in nearby countries. They will be fine. Treat the collapse in stock prices as a major buy opportunity. The next phase II deal with China should be easier as they are now in no position to play tough guy. The Chinese now need the US trade more than ever. One man’s problem is another man’s opportunity. Those companies on the fence as to moving out of China just had their decision made for them. That will weaken China further.”

Please note that we have lowered our cash reserves and have been scaling into the US stock market on the selloff. Our quantitative strategies are now fully invested; they were in cash. Our sector rotation (Alpha) is now on offense and no longer on defense. We will say more about the stock markets in another piece.

Note: The Wuhan coronavirus outbreak is still unfolding. Research and opinion we accumulate will be assembled here for your reference.