In a recent review of fixed-income security returns, Cumberland Chairman, David Kotok, raised a question concerning what looked to him to be an anomaly with respect to the spread between the 5-year and 10-year breakeven inflation rates on US Treasures, which had narrowed to only 5 basis points.

Both market-based measures of inflation expectations, calculated as the difference between the yields on Treasury index-Linked Securities (TIPs) of corresponding maturities, have homed in on an estimated inflation rate of 2% during the pandemic, after it had hovered below 1.75% for the better part of 2019. How could this be, and is the current 5-basis-point spread an anomaly? This higher estimated inflation suggests that there was the expectation that inflation would be 2% for more than 10 years. On explanation that might be offered, if one were an FOMC member, would be to claim that the market now believes in the Committee’s ability to hit its 2% inflation target and point to the fact that both the 5-year and 10-year rates are now converging on 2% (see circled section in red in next chart) as a measure of FOMC credibility.

Is this convergence a recent phenomenon, or might there be more to the story? The chart showing the breakeven inflation rates and their spread suggests some different conclusions. 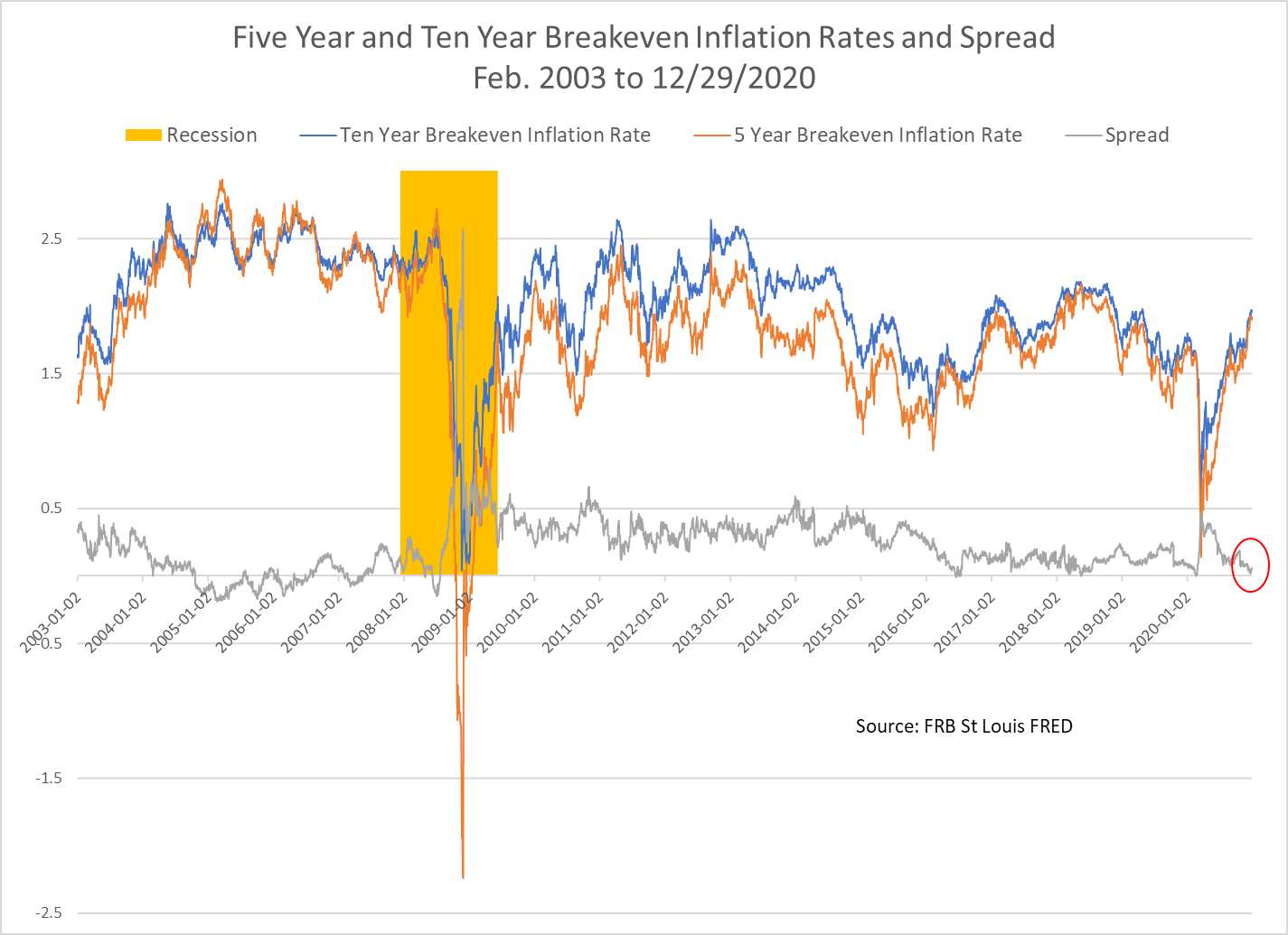 First, the spread going back to 2003 is obviously not constant and has hit 5 basis points on several occasions. Second, the spread is variable, and it is hard to see from the data what would constitute a normal spread. Third, leading up to the Great Recession of 2007–2009, the spread even went negative for several periods. For example, for over 278 days, from October 10, 2004, through July 14, 2005, the spread was negative. After a brief period, the spread went negative again from August 8 through November 5, 2005.One possible explanation for the negative spread might be Fed policy regarding inflation during that period. This next chart shows PCE inflation (the index that the FOMC is concerned about) and Fed policy as reflected in movements in the target rate for fed funds. 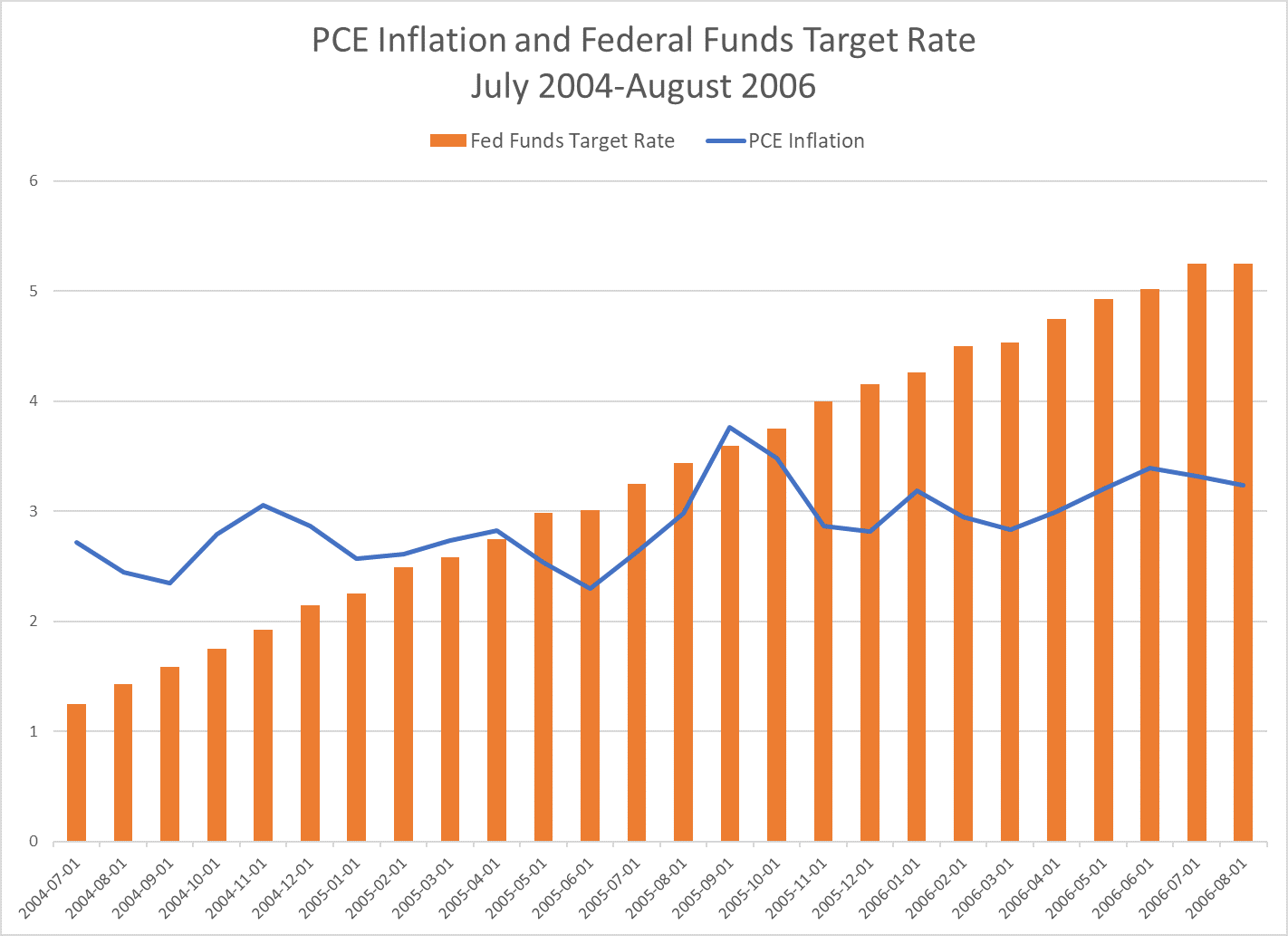 During the period in question, PCE inflation was well over 2%, and the Fed responded with a series of 17 rate hikes. By September 2005, despite the rate hikes, inflation was now over 3%; and the Fed kept hiking rates until the fed funds target rate stabilized at 5% in July 2006. This pattern might help explain the negative spread on the breakeven inflation rates, since the market knew that the Fed was trying to get inflation down but still hadn’t adopted an explicit inflation target.However, there were also similar periods when the spread was in the 5-basis-point range, especially during late 2007 and early 2008, at a time when inflation was low and running consistently below the FOMC’s 2% target.

The following chart plots the 10-year and 5-year constant maturity rates and their spread, and we can see that widening spreads seem to be attributable mostly to a steepening of the yield curve from an increase in the 10-year rate relative to the 5-year rate. Note too that with inflation expectations now at 2% the real yields are negative on these securities. 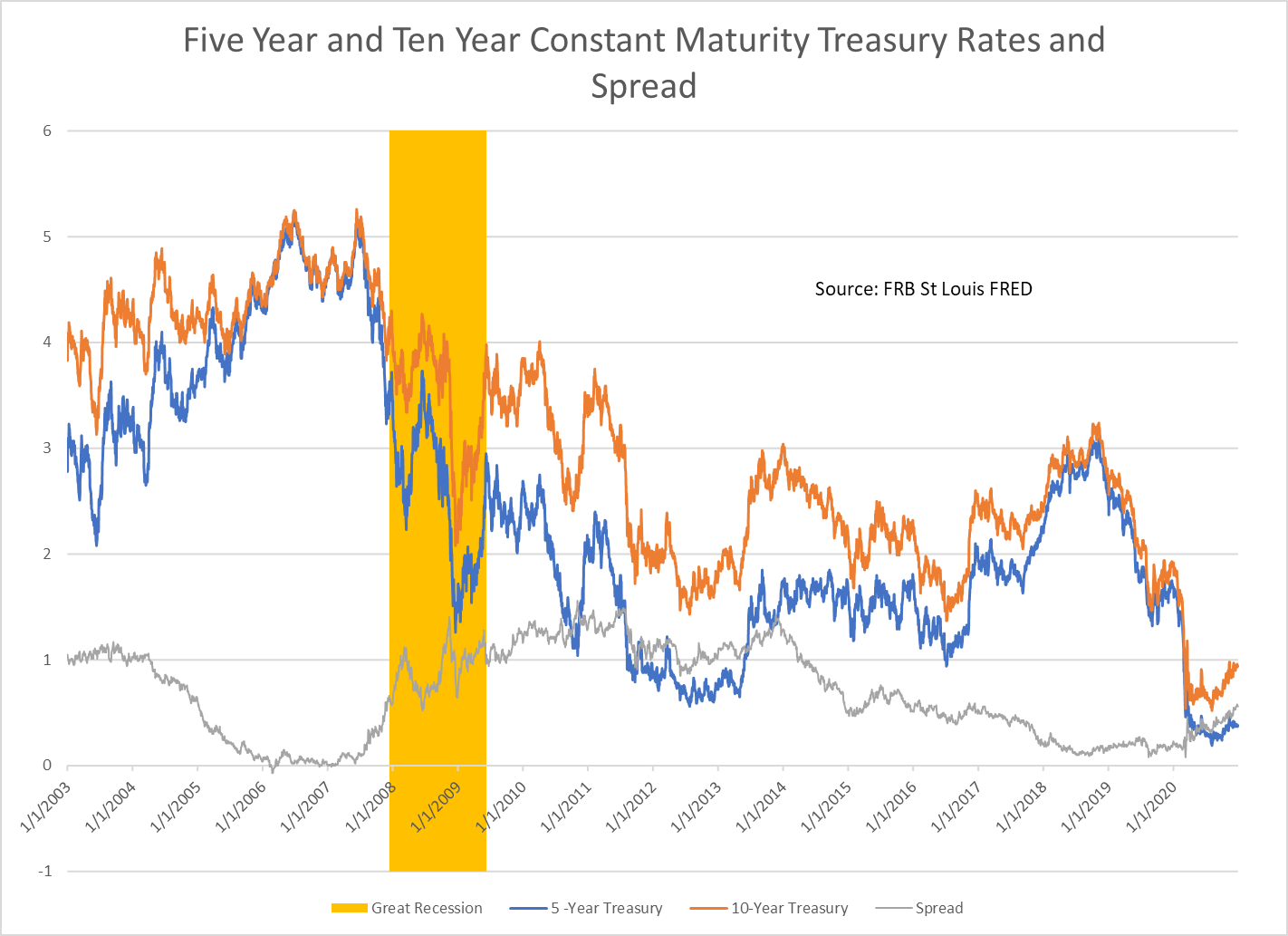 So, the bottom line is that the measures vary, as do the spreads; and there is little evidence from the period examined that there is a normal spread. Thus, it isn’t clear that what we are looking at now is in fact an anomaly, with the expected inflation spread now at 5 basis points. It has happened before.
Robert Eisenbeis, Ph.D.
Vice Chairman & Chief Monetary Economist
Email | Bio