According to the Brookings Institution,

“Newly released Census Bureau population estimates through mid-year 2020 reveal record lows in U.S. population growth, both annually and for the 2010-to-2020 decade….

“These statistics paint a portrait of a nation that is experiencing unprecedented growth stagnation, even before the COVID-19 pandemic hit.” 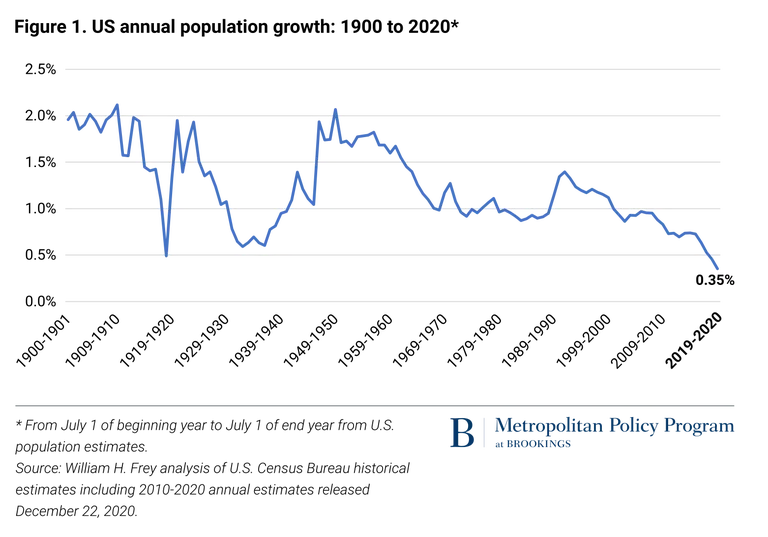 Wanting to do a deeper dive into this surprising data, we turned to Ken Simonson, the chief economist for the Association of General Contractors. He is also a member colleague of the National Business Economic Issues Council. He shared the following briefing on the census, including the spreadsheet linked at the end of the briefing, which is packed with details. The decennial census becomes the official count to apportion the House of Representatives. It also determines the allocation of many payments of varied types. Notice the shifts in population. The implications for credit analysis are important. States that gain population add to their tax base while those losing people face shrinking tax revenues. We thank Ken for sharing his efforts with our readers.

On December 22, the Census Bureau posted tables showing annual population estimates for the United States, each state, and the District of Columbia as of July 1, 2020, along with revised estimates back to 2010. These estimates are based on births, deaths, and migration information dating back to the 2010 census, not the 2020 census estimates, which will be issued sometime in 2021 and will be used to apportion seats in the House of Representatives, allocate federal spending for scores of programs, and other purposes. Nevertheless, these annual estimates are a useful indicator of population change.

Population changes over time are a major contributor to demand for numerous types of construction, funding for public construction, and supply of potential construction workers.

U.S. population growth slowed for the fifth year in a row to an all-time low of 0.35% between July 1, 2019 and July 1, 2020, from 0.46% (initially estimated at 0.48%) the year before. The slowing in the growth rate resulted from a continuing slowdown in the number of births; an increase in deaths (due both to rising numbers of very old people and more deaths of younger adults from suicide and drug overdoses, with a small increment as of July 1 attributable to covid-affected deaths); and a decline in net immigration.

A record 16 states lost population in 2020, compared to 14 in 2019 (previously estimated as 10). New York lost population for the fifth year in a row and had the steepest percentage loss (-0.65%) and the largest numerical decline (-126,355). New York and Illinois are the only states to experience slower growth (or steeper loss) of population each year this decade.

A total of 34 states had smaller growth or larger losses in 2020 than in 2019. The largest numerical decline in growth occurred in California, which lost population for the first time in its history (-69,532, -0.18%). California’s growth rate in the years 2011-2015 was slightly above the national rate (approximately 0.8% vs. 0.7%) each year. But the state’s growth has slowed for the past six consecutive years.