There were two unusual events last week. One made massive headlines; the other flew under the radar.

Unless an investor was on a Martian vacation, it was impossible to avoid the media battering that featured keywords like GameStop, Reddit, Robinhood, Citron, and WallStreetBets. And there was a cash requirement from brokers by DTCC, the stock market’s central clearing hub. Hat tip to Bloomberg for full reporting on DTCC.

Ian Katz of Capital Alpha Partners had a detailed note published on Sunday night.   Ian gave us permission to quote him.  Here’s his take on the SEC:

“Though the White House says Janet Yellen and Treasury are monitoring the situation, the agency to watch is the SEC. Acting Chair Allison Herren Lee and the three current SEC commissioners released a statement Friday saying they will ‘closely review actions taken’ by brokers and securities firms ‘that may disadvantage investors or otherwise unduly inhibit their ability to trade certain securities.’ The SEC also said it will ‘protect retail investors when the facts demonstrate abusive or manipulative trading activity that is prohibited by the federal securities laws.’  Finding and proving market manipulation, and identifying culprits if there are any, isn’t easy. But the SEC will dedicate a lot of bodies and hours to the search. Even given the David vs. Goliath narrative pitting retail investors against hedge funds, the SEC will feel pressure to find something illegal.”

All this noise is perfectly understandable when an obscure stock rises fivefold in a single day. Here’s the GME historical chart for reference. 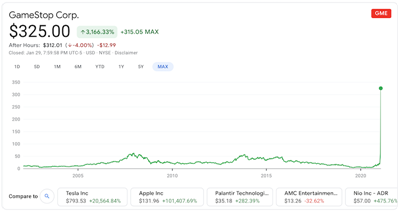 Cumberland does not own GameStop. Furthermore, the ETFs that are held in Cumberland portfolios are either devoid of GME or have exposure at insignificant levels. That is not true of all ETFs: 63 ETFs have some GME exposure. Here’s an excellent discussion of ETFs and GameStop: https://www.wealthmanagement.com/etfs/gamestop-your-etf.

For reference only and with no recommendation of any type, here’s a list of “most shorted” companies, provided by Seeking Alpha (courtesy Schulte Research). Note please: Cumberland is not short any of these securities. 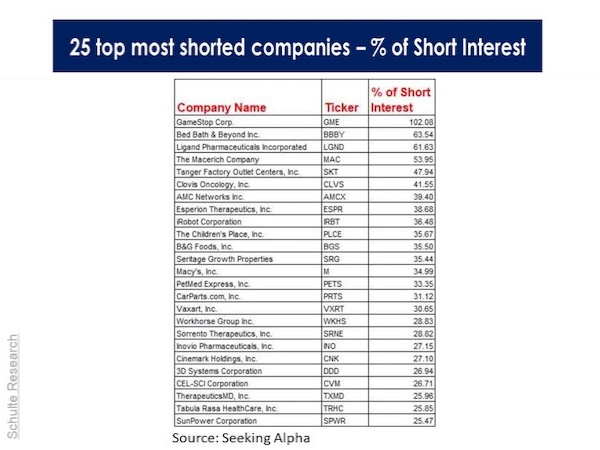 Let’s move to the other unusual event, involving SKEW, the CBOE SKEW Index, which is a measure of potential risk in the S&P 500. Much like the VIX Index, SKEW can be a proxy for volatility and investor sentiment.

Below is a historical chart of SKEW created by Cumberland’s Leo Chen. 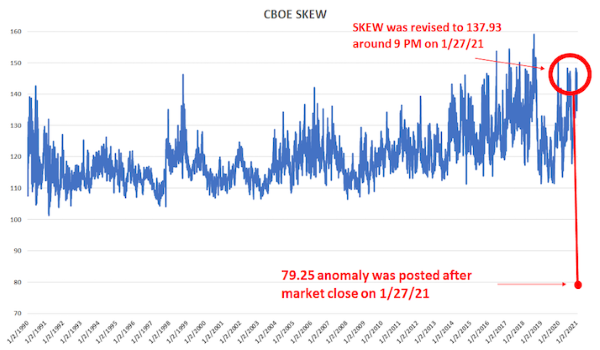 Note the 79.25 price that was reported but subsequently changed by the CBOE. Here is an article that discusses that 79.25 reading: https://www.priceactionlab.com/Blog/2021/01/options-cboe-skew/. Let me excerpt:

“During regular trading hours on January 27, 2021, CBOE SKEW Index dropped to a low of 79.25, possibly due to extreme divergence in prices of calls and puts. This development indicates that speculation in the stock market may have reached unprecedented levels.”

So while the hoopla was about GameStop, the pricing anomaly that showed up in SKEW might have been a force that exacerbated the wild swings of the day.  The reason is the options market.

Julian Emanuel of BTIG released a report Sunday night on the options gyrations.   We thank him for giving us permission to quote him.

“The options ‘Rule of 16’ says a one-day 1% move equates to 16% volatility. By that measure, 1,000% volatility (a 62.5% one-day move) was cheap in short-term GameStop (GME) options which expired this past week. GME’s price on 1/25 was $76.79. On 1/26 it was +93%, on 1/27, +135% to $347.51 and on Thursday, the 24 hour high/low range was $513.12 to $112.25. GME began 2021 at $18.84. Along with easy online access, zero fee trading, zero interest rates, and WFH giving the Public more time to trade, short dated call options have democratized the playing field, affording retail a ‘Limited Risk, Theoretically Unlimited Reward’ leveraged means of investing and increasingly, speculating. But in the week just past, options (much of whose premium represents the time value of money as opposed to ‘intrinsic’ value) have likely become too expensive to remain a source fueling further upside in a number of the meteoric gainers.”

Note that SKEW values generally range from 100 to 150, where the higher the value, the higher the perceived tail risk. When SKEW is 100, which is technically its lower bound, it means the possibility of an outlier return (negative return) is extremely low. It’s not necessarily saying the overall risk is low, but only the tail-risk is low. In another word, investors are unlikely to suffer from huge losses, but small ones are still possible.

Let us explain further for those who may not normally follow these esoteric trading issues.

The SKEW is a complex calculation that measures tail risk in the S&P 500. It is derived from stock option prices. When you examine the SKEW methodology closely, you realize that a 79.25 price is practically impossible. It would mean that the stock market is paying you to take a tail-risk.  In other words such a price means that a trade can be constructed in which the investor cannot lose significantly.  This is never supposed to happen.  But we see that there is evidence that such a trade may have occurred on the same day as the wild swings of short covering and GameStop trading. That price suggests a market distortion that was quickly multiplied by many times.  Thus the SKEW confirms Julian Emanuel’s analysis.

Many quantitative trading schemes run the math automatically. And the trading algorithms are set up to act nearly instantaneously whenever an anomaly occurs. So an intraday algo could have been triggered and could have launched a trade as the short squeeze in GameStop was sending markets gyrating. Depending on the structure of the hedge fund caught on the other side of the anomalous trade, the fund could easily have had a loss, and reports are that some of them did. We will never know for sure.

At Cumberland we employ sophisticated math in our quantitative strategies. We also have a safety check mechanism, and we did not act on the 79.25 price. Leo Chen saw that price posted at 7 PM. At 9 PM, he noted the changed posting of the more logical price of 137.93. Leo, Matt, and David exchanged thoughts on the issue during the early evening. We concluded that there had to be something highly unusual with the 79.25 posting. That conclusion was validated later in the evening.

Within Cumberland a 79.25 price might have triggered portfolio changes if our safeguards had not been in place and if we had acted on it.  But we didn’t.  We didn’t make those changes; but if, and I repeat, IF, we had been fully automated and hadn’t checked the closing price, our math might very well have triggered trades that would have impacted many portfolios and millions of dollars in assets. We have no way to know the inner workings of the hedge funds that lost money. We are only venturing a guess as to how they got caught out.

Let’s us conclude with a comment about all the political hoopla around the GameStop affair. Politicians as various as Senator Ted Cruz and Congresswoman Alexandra Ocasio-Cortez have seized upon the volatility to make statements about supervision and regulation, protecting and empowering the retail investor, etc.

We doubt that many politicians really understand the markets.

Here’s what we believe.

Gamblers and speculators need to be allowed to lose. If investors want to chase false narratives and hang on the proclamations of social media trolls, they should be allowed to do so. Caveat emptor applies. There is no reason in the world to use taxpayer money to bail out anyone.  That has to be true for hedge funds and for the small investors.

There are reasons to require honest disclosures and transparency. That is what a government must do. But it is not the government’s obligation to guarantee profits and make up losses because someone is not smart enough to do research. If you want to own GameStop with a $20 billion market capitalization, we believe you should have the right to do so. We won’t do it with our clients’ money, but you can do it with your money if you want to.

In our view the 79.25 price posting needs some further examination. It happened, and there has been no official explanation from the CBOE. At least at Cumberland not a single client was hurt by the pricing anomaly.

These are wild times in investing, as well as in politics and government, science, and medicine. We live in a world of competing (and often false) narratives and the empowering of social media trolls. We don’t like it, but that’s the way it is.

To us, that means doubling down on fact checking. The curating and citing of high-quality information is now more important than ever.

Check the facts. Be safe.