On Wednesday, the FOMC left its policy stance unchanged. This decision was consistent with the message sent after the previous meeting and was not contradicted by speeches given by FOMC participants in the intermeeting period.

This action was also consistent with the consensus view of economists who follow the Fed. Indeed, of the 39 economists responding to the April 23–25 Bloomberg poll, only two had forecast a rate cut in 2019 while the rest had the funds rate target steady through 2020.[1] Despite this data, the stock market declined after the FOMC statement was released, indicating that a rate reduction had been expected but not delivered. The market continued to decline over the next two days. In contrast, on Wednesday, May 1, the ten-year Treasury rate rose at about 10 AM and then jumped even higher just before the release of the FOMC statement at 2 PM, then dipped slightly before the meeting, as the Bloomberg chart below indicates. It then recovered to pre-10 o’clock announcement levels after Chairman Powell’s press conference. How can we explain these reactions to the information flowing from the FOMC meeting? Why was the stock market’s reaction more prolonged than the Treasury market’s was? 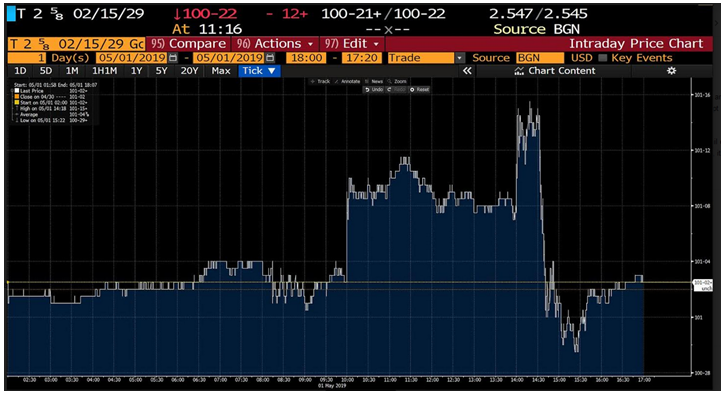 In the case of the stock market, rhetoric from some politicians and even a now-former Fed nominee argued that the FOMC had made a mistake in raising rates in December 2018 and that time was ripe for a rate cut. Economic growth appeared to be slowing through 2018, with Q3 growth below Q2 growth while Q4, at 2.2%, was below Q3’s 3.2%. Participants were expecting a modest number for Q1 2019, especially since first-quarter growth had been slow for the past five years and we had a full government shutdown for a full one third of the quarter. Everyone expected the shutdown to subtract from Q1 growth. Finally, in addition to expected slow growth, part of the rationale on the part of those expecting a possible rate reduction lay in the fact that inflation had been running persistently below the FOMC’s 2% target, and thus at some point a rate cut would be necessary to further stimulate inflation via extraordinary monetary accommodation until the target was achieved.

Of course, we learned that this scenario did not match the view of the FOMC. Chairman Powell, in his press conference, countered the idea that inflation was “persistently below target” when he stated that the decline in inflation in 2019 was not only expected but also was viewed as being due to “some transitory factors.”[2] If markets had assumed that inflation below target was persistent and hence would soon require a rate increase – especially if the FOMC was as committed to its inflation objective as it was to the other leg of its dual mandate – then Chairman Powell, when questioned by an astute reporter, effectively shut down the possibility of a near-term rate cut to achieve the FOMC’s inflation objective. Nancy Marshall-Genzer asked, “You were saying if inflation does stay low and these low inflation rates are not transient, you said a couple of times you’ll take that into account with monetary policy. How, specifically, will you take that into account?” Chairman Powell’s response was extremely vague. He stated, “It’s hard to say, because there’s so many other variables. Ultimately, there are many variables to be taken into account at any given time, but that’s part of our mandate. Stable prices is half of our mandate and we’ve defined that as 2 percent, so we’d be concerned and we’d take it into account.” The reporter pushed further asking whether an interest-rate cut would be possible, and Powell responded that he could not be more specific.

That interchange, combined with Powell’s use of the word transient, was interpreted by markets as indicating – as the economists’ Bloomberg predictions had implied – that policy was on hold for the foreseeable future. There would be no rate cuts to satisfy stock market investors’ desire for more stimulus; and as far as the Treasury market was concerned, the meeting was a blip, as it returned to its pre-meeting position. If there was any doubt, the 3.2% Q1 preliminary growth estimate, coupled with Friday’s CES report of a 3.6% unemployment rate and over 263,000 jobs created in April, clinched the fact that no rate cuts are on the horizon. Interestingly, if the FOMC meeting had been a week later, there would have been no shock to the stock market. The lesson here for stock market investors is that hoping for a rate hike as a substitute for considered analysis is not a good strategy.