Bloomberg’s Lisa Abramowicz recently tweeted, “When you measure the prices of things Americans are spending money on right now, ‘it turns out that the actual inflation rate is not as low’ as the data suggest” (https://twitter.com/lisaabramowicz1/status/1263868020516151298). Her evidence was a chart showing how spending for food at home had jumped while spending on food away from home had declined significantly. But it turns out that it isn’t enough to look only at prices of individual items. We must also consider what weight they get in computing overall inflation.

The Dallas Fed has just released its April trimmed mean PCE inflation rate, which is touted as a measure of the overall movement of inflation based upon the Bureau of Economic Analysis’ Personal Consumption Expenditures Index (PCE). What is unique about the measure is that it throws out the extreme monthly movements of prices on both the high side and low side. Of the approximately 178 components examined (note that the BLS considers 300 such components in computing the CPI), it totally omitted 62 components with the highest increases and 60 components with the largest price declines. The measure compares the annualized one-month rate, 6-month rate, and 12-month rate with both the BEA’s PCE Index and PCE ex food and energy (https://www.dallasfed.org/research/pce). Below is a snapshot of those comparisons. 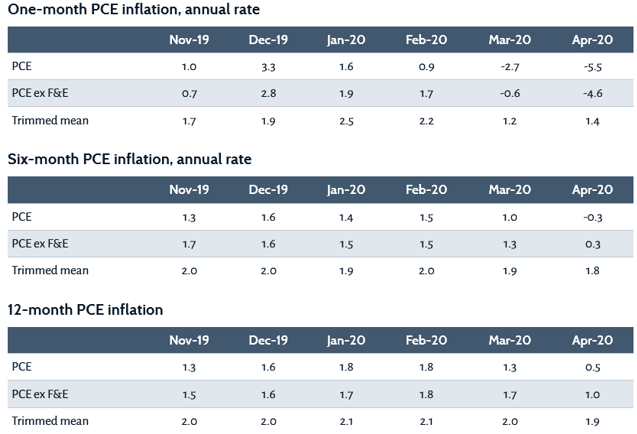 What are we to learn from this comparison? First, the trimmed mean tells a more benign story about the most recent monthly change than do the sharp declines in the PCE and PCE ex F&E. Second, that conclusion is reversed when we look at the 6-month comparisons and a more concerning story on a 12-month basis. So what should we conclude? The monthly story showing the annualized data says this is what the inflation rates would be if the monthly changes were to persist for the next 12 months. Do we really believe that prices will decline each month for the next 12 months as they did in April? In the current environment, it is highly unlikely that this will be the case. The one-month percentage change in the trimmed mean PCE would be only 0.42%. Similarly, the year-over-year comparisons show a much higher rate of inflation for the trimmed mean PCE than for the other two measures. When we seek to make sense of these differences, we find that the devil is in the details and especially in what we are willing to assume about inflation dynamics. Do we believe that all prices move together, or do some prices lead and some lag? If the latter is true, then the trimmed mean throws out critical information about inflation dynamics. If we don’t, then the trimmed mean throws out monthly noise.

Fortunately, the Dallas Fed also publishes the detail behind its calculations. The detail shows annualized monthly changes for some 178 components together with their weights. The component with the highest percentage increase was eggs, which increased 497.2% in price. This instance illustrates how misleading the reported change is using annualized numbers, since no one believes or can reasonably assert that the price of eggs will increase that much over the next year. The one-month percentage increase April was 16.1%, which compares with a 2.8% increase in March. On an annualized basis the March increase would translate to 39%, but we know that figure is unlikely to be a good representation of inflation dynamics. It is also worth noting that the price of eggs gets only a weight of 0.12% in the index. The item with the greatest weight in the index for April, as was the case in March, is the imputed cost of an owner-occupied home, which accounted for 14.2% of the index in April. That cost showed a 2.1% increase for the month. In the case of the trimmed mean, the excluded components whose prices declined accounted for 24.3% of the weight in the PCE; the included portion accounted for only 44% of the index; and the excluded items with price increases accounted for 32% of the trimmed mean. That said, it is interesting that of the 178 components in the trimmed mean PCE Index, 93 actually showed increases; 6 had no change; and 79 showed price declines. Finally, of the top 10 items that are experiencing the largest price increases and that have the greatest weight in the index, 7 are food-related, one is prescription drugs, and one is paper products (no surprise there). Together, these 10 items added only 20 basis points to the overall PCE index produced by BEA. The 10 items which have the greatest weight in the index and which are experiencing price declines (including, for example, gasoline and men’s and women’s clothing) subtracted 60 basis points from the overall index.

So the picture that emerges is not as clear as Lisa Abramowicz’s tweet would have us believe. The prices of some goods that are important to people, like certain foods, have gone up, while the prices of other goods and services, like gasoline, have declined. Furthermore, it is also clear that the dynamics of those price movements are due to significantly different factors. Food prices at grocery stores have gone up as a result of increased demand, in part because of trends like hoarding and eating at home instead of at restaurants, and in part because of disruptions that COVID-19 has caused in the supply chain. On the other hand, the decline in gasoline prices is due to the Saudi/Russian jousting over production, which has been exacerbated by declines in demand in the US as people have cut back on driving. In short, it is important to look at the detailed data and not to extrapolate one-month price changes and then annualize them as if they will persist for an entire year.

(Part one of this discussion was published on May 22, 2020 here: https://www.cumber.com/cumberland-advisors-market-commentary-inflation-and-capacity-utilization/)