Progress in 2021 on one leg of the FOMC’s dual mandate, the jobs situation, has started to be revealed with the release of 5 weeks of data on new unemployment claims for January and the BLS January CES jobs numbers.

These data suggest the pandemic is still having a significant negative impact on economic activity and that little progress is as yet being made on the economy’s reaching the Fed’s maximum employment objective. Moreover, what progress is being made is distributed very unevenly across the economy. Let’s delve into the data a bit more. 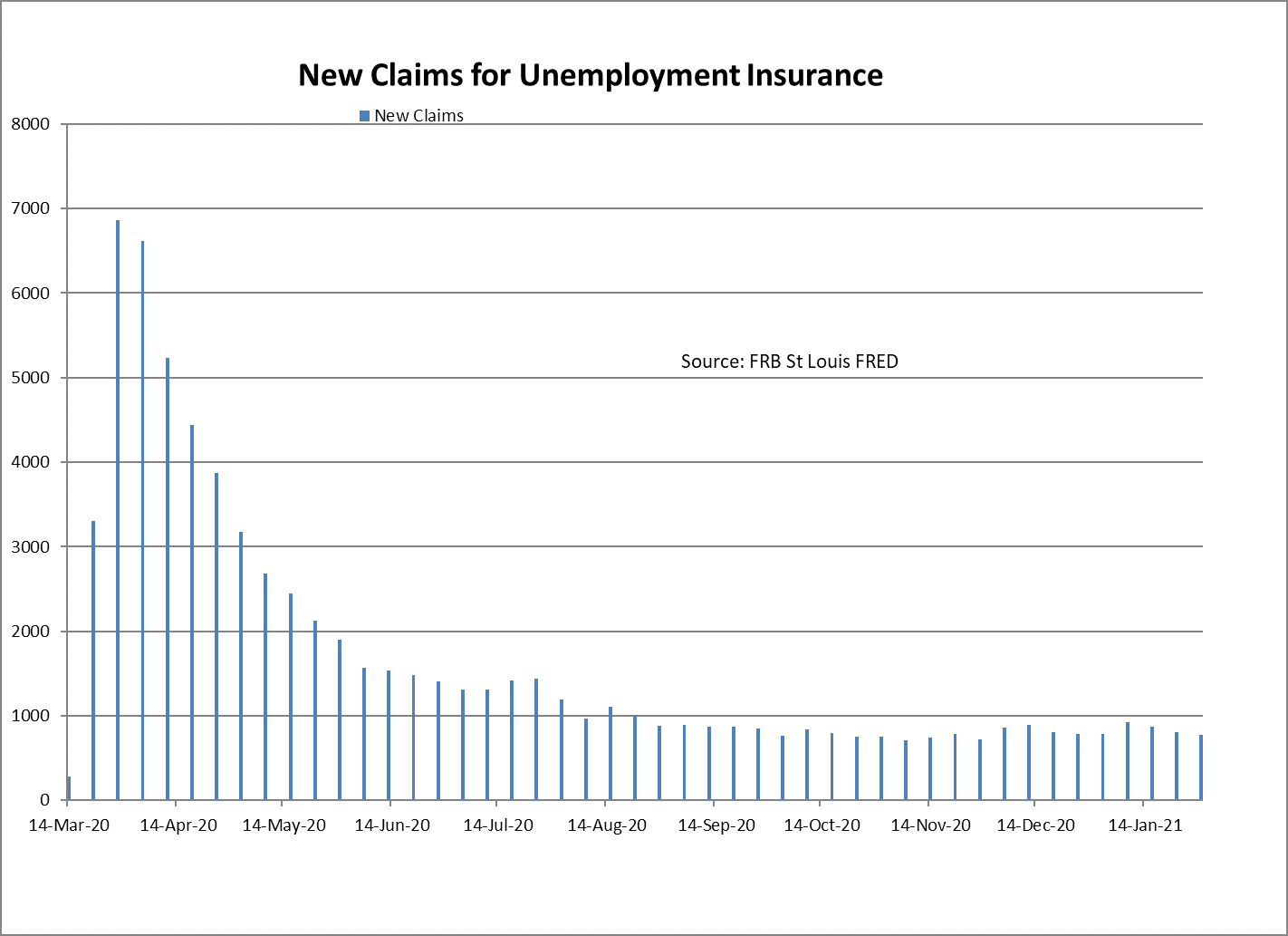 New claims for unemployment insurance, and as the chart above shows, have fallen significantly from their high of 6.9 million in March 2020 but are still about three and a half times their pre-pandemic average of slightly over 205,000. Moreover, new claims edged up to 927,000 in the first week of January before falling back to their present level on January 30. Continuing claims as of January 16 are down slightly from the previous week but remain high at 17,835,525. We also know that there remain 10.1 million unemployed people, and another 7 million people are not presently in the job market but would like to work. As a result, the unemployment rate is still high, at 6.3%. 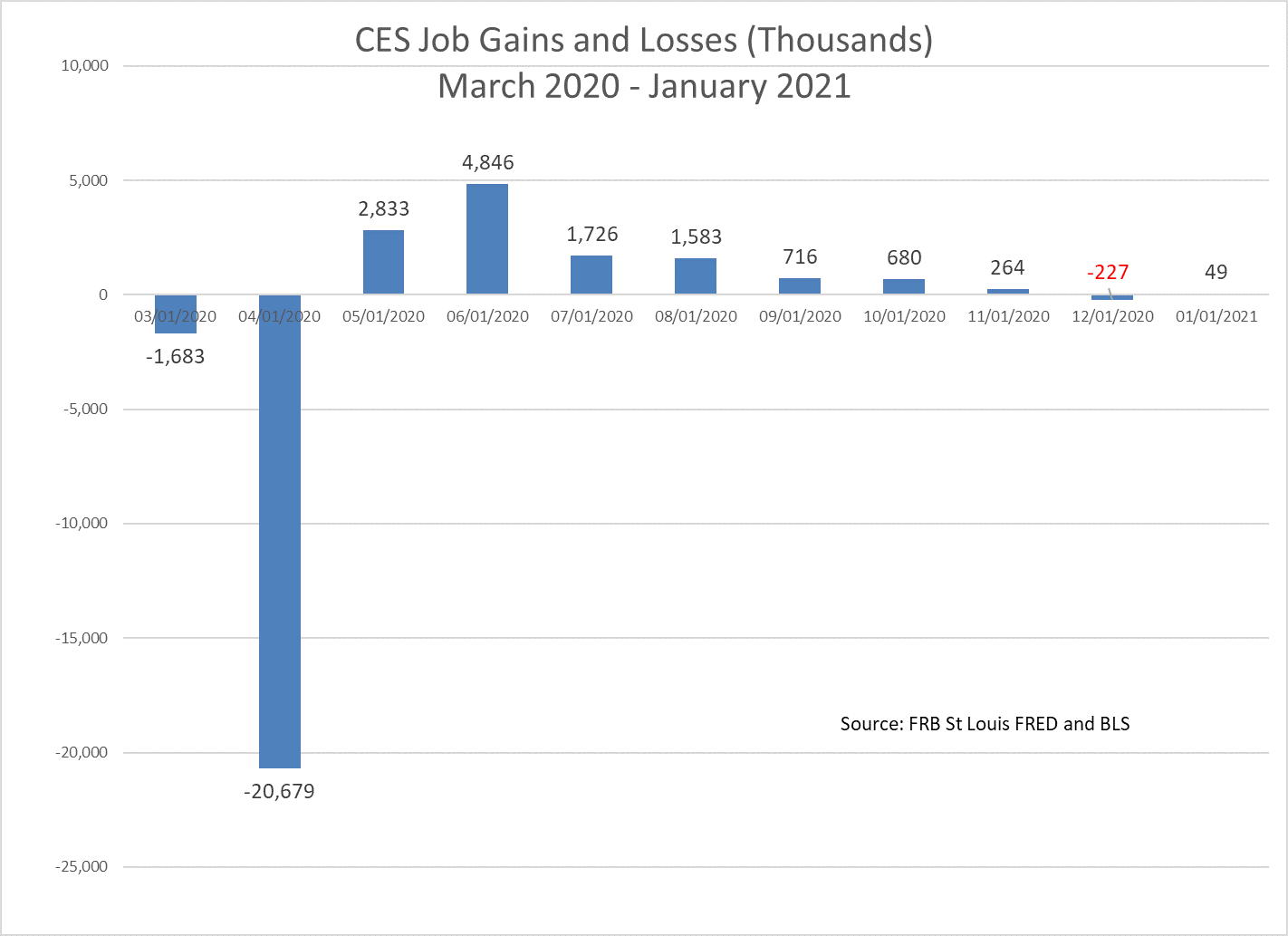 How is the economy doing as far as creating jobs to put the unemployed back to work? The picture here is mixed. On the whole, as the chart above shows, it appears that the jobs market has stalled. After job creation steadily declined, month by month, from June and then turned negative in December, only 49,000 net new jobs were created in January. Interestingly, this is less than one third of the new jobs predicted by ADP in its count released earlier last week.

The monthly net jobs number, however, obscures the fact that job creation is extremely uneven across industry with significant losses in some segments and large gains in others.   Particularly hard hit are those sectors requiring face-to-face interactions among people; and it isn’t clear that those being laid off can easily transition to those sectors where jobs are being created. For example, the following is a sample of those sectors that experienced job losses from December: construction (-3,000), manufacturing (-10,000), retail trade (-38,800), transportation and warehousing (-27,800), healthcare (-40,800), and leisure and hospitality (-61,000). These six employment sectors lost a combined total of 181,400 jobs in January alone. On the plus side, the following is just a sample of those sectors that experienced an increase in employment in January: mining and logging (9,000), nondurable goods (7,000), wholesale trade (10,000), information services (16,000), finance (8,000), professional business services (97,000), and government (43,000). These new jobs add up to 190,000. Interestingly, though, of the 97,000 added in the professional business services sector, 80,100 were temp jobs.

The picture that emerges is of a very uneven pattern of jobs created and lost, which, when combined with the overall unemployment situation, suggests an economy that is still struggling with the pandemic. Moreover, it is clear that the economy is far from achieving the FOMC’s maximum-employment objective. Thus, we can expect continued policy accommodation until the employment situation improves significantly.