The BLS Job Openings and Labor Turnover Survey (JOLTS) data come out with a lag, so we are now just getting a look at the July numbers. They do, however, help fill in some of the labor dynamics that are occurring within the economy as we adjust to the COVID-19 pandemic shock.

We know that at the peak of that shock a total of over 22 million workers were unemployed, and subsequently slightly over 10 million of those have been re-employed. The following chart shows the relationship between the number of unemployed and job openings (through August for the unemployed and through July for job openings). 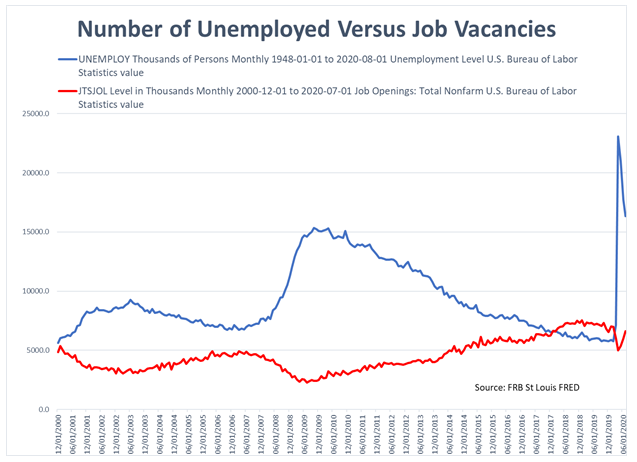 There was a brief period earlier this year when the unemployment rate was at a historic low of 3.5% and the number of job openings actually exceeded the number of unemployed people. But that picture quickly changed due to the pandemic.

As shown in the following chart, the rate of separations (the monthly change divided by total employment) increased from slightly under 4% prior relative to the crisis to a peaking of 9.7% before dropping back to 3.6% in July. Similarly, the rate of hires came back from a low of 3.1% in April to climb to 5.4% in June before dropping back to 4.1% in July. The JOLTS report also includes detailed breakdowns by industry. The highest rates of separation in July occurred in Arts, Entertainment, and Recreation (7.4%) and Accommodations and Food Services (6.3%). Interestingly, those same two industries also reported the highest hire rates, at 10.9% and 9.1%, suggesting a lot of disruption. The only other category with a separation rate above 5% was Professional and Business Services (5.1%), which saw a hires rate of 5.7%. 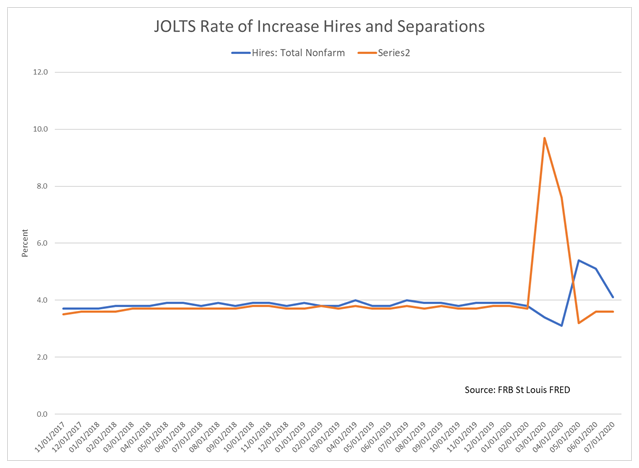 A similar pattern is shown by the rate that employees have quit their jobs versus the rate that they have been laid off. Layoffs peaked in March and dropped to 1.2% in July, while quits fell to 1.4% in April when COVID-19 had its worst impact on the economy, and then recovered to 2.1% in July. The industry most affected in terms of layoffs was Arts, Entertainment, and Recreation (5.2%). The only other category above 2.8% was Construction. The highest quit rate was for Accommodations and Food Services (4.3%), with the next highest being Retail Trade (3.8%).

What we can see from these data is that the segments most affected, mainly Retail Trade; Arts, Entertainment, and Recreation; and Accommodation and Food Services, involve jobs that require direct contact with the public; and capital can’t be substituted to replace those workers. Interestingly, while there are lots of people being let go or temporarily furloughed, these areas also seem to be the ones that have the most job openings and new hiring taking place. The one area where there seemed to be a lot of jobs opening up in July was Professional and Business Services, which increased 5.7%. The segment also saw strong hiring growth at 5.7% and relatively high separations at 5.1%, whereas quits were relatively low at 2.7% and layoffs were low at 2.1%. 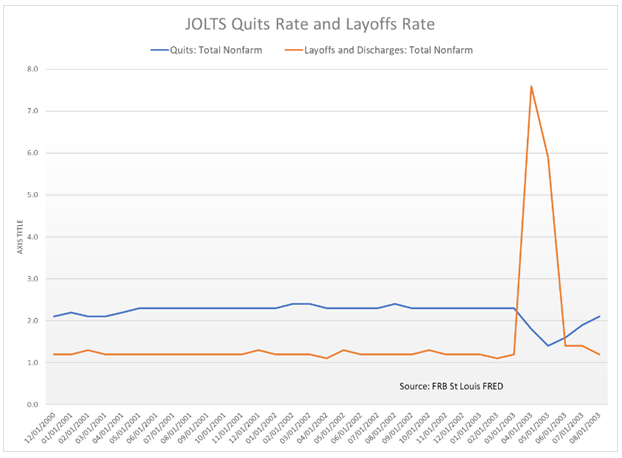 What the data suggest going forward is that once a vaccine is developed and people gain confidence in their safety, the Leisure and Hospitality and Retail segments should bounce back. The impacts on other job sectors are less clear, but we can be sure their recovery will vary significantly.