In most data releases during the pandemic, it is possible to find some things that are positive and some that are negative, and the extent to which one thing is emphasized over another tends to be influenced in today’s world by politics. The new CES jobs report released by BLS is no exception. There is clearly some positive news in the release. After a loss of 1.4 million jobs in March followed by a whopping 20.8 million loss in April, the four succeeding months have seen gains of over a million, as the chart below shows. 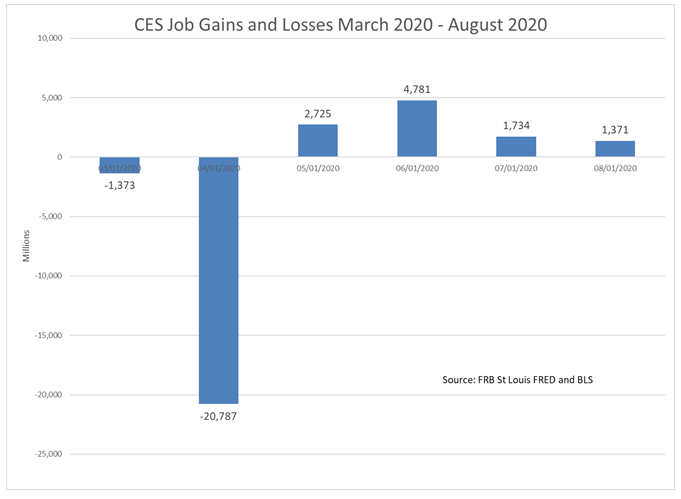 Those gains replace 10.6 million of the jobs that were lost. On the downside, there are still 11.5 million people unemployed, and job growth peaked in June at 4.8 million but then declined in July and fell even more in August.

Again, on the positive side as the next chart shows, after peaking at 14.7% in April, up from a historical low of 3.5% in January, the unemployment rate has continued to decline and now stands at 8.4%. New claims for unemployment insurance have also declined steadily from a high of about 7 million in late March to 881,000 in the week ending August 29. 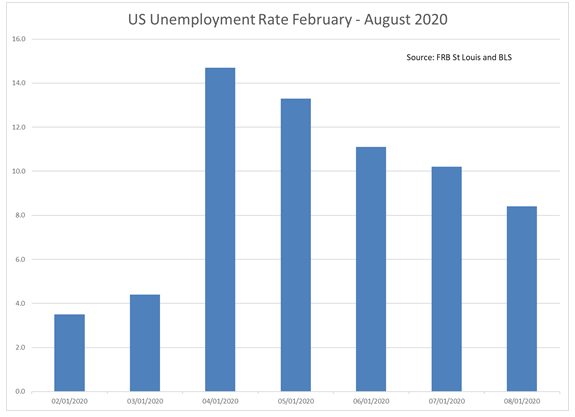 Of course, the job gains are not evenly distributed across all sectors of the economy. Approximately 83% of the cumulative job changes since April have been in the service sector, with the goods-producing sector lagging far behind. In addition, those service-sector gains are not evenly distributed within the service sector, as the following chart shows. 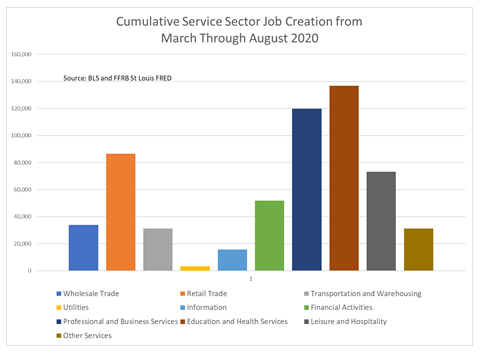 Of the 10 major segments of the service sector, the greatest gains have occurred in just half: Retail, Information, Financial Activities, Professional and Business Services, Education, and Leisure and Hospitality. These five subsectors have accounted for 71% of the service job gains.

So while there are positive signs for the labor market, the gains are not evenly distributed; and given the recent projections for COVID-19 infections, we can expect that labor markets will continue to struggle, particularly in areas like bars and restaurants, and in segments that require workers to interact with the public. If the predicted COVID-19 surges that is predicted for the fall is realized, then the jobs outlook could get worse before really turning around. We have a long way to go.