In advance of the release of the FOMC’s May minutes, speculation in the press and by financial market participants was that the Committee might cut the federal funds target rate. The main line of conjecture centered on how long the FOMC could continue to miss its inflation target on the downside before a rate cut was warranted.

Clearly, given the lowest unemployment rate in 50 years but with inflation still running persistently below target, current economic conditions present a policy dilemma for the FOMC that is reflected in the widely differing views of FOMC participants. For example, President Rosengren, FRB Boston Bank president, notes that the current conditions are arguably sending conflicting signals, with the unemployment situation implying that there is a case for raising rates, while below-target inflation suggests that a rate cut would be appropriate.[1] On balance, however, Rosengren views the below-target inflation situation as temporary and financial conditions as accommodative. Thus, he sees no need for a further rate move at this time. In contrast, FRB St. Louis Bank President Bullard said on Wednesday, May 22, that a rate cut might be appropriate:[2] “A downward policy-rate adjustment even with relatively good real economic performance may help maintain the credibility of the [Federal Open Market Committee’s] inflation target going forward. A policy rate move of this sort may become a more attractive option if inflation data continue to disappoint.” President Evans of the Federal Reserve Bank of Chicago has voiced similar concerns about the failure to hit the FOMC’s inflation target.[3] Finally, Governor Brainard’s recent observation is symptomatic of the puzzlement over why inflation has been persistently below target: “Of course, it is not entirely clear how to move underlying trend inflation smoothly to our target on a sustained basis in the presence of a very flat Phillips curve. One possibility we might refer to as ‘opportunistic reflation’ would be to take advantage of a modest increase in actual inflation to demonstrate to the public our commitment to our inflation goal on a symmetric basis.”

Clearly, this is just a musing on her part, since inflation has not been above target for any relevant period of time. Hence the view that the FOMC cleaves to a symmetric view of inflation policy (and thus deems it sometimes acceptable for inflation to be somewhat above or below target) is at this point conceptual rather than a reflection of recent history. The FOMC’s reference to its pursuit of a symmetric inflation policy raises addition complications, considered below.

But first, it is useful to illustrate just how long inflation has been below target. The following chart shows the year-over-year percentage change in the FOMC’s preferred inflation metric (headline PCE) since it was adopted in early 2012, relative to the 2% target. The chart demonstrates that inflation was continually below target until it briefly exceeded 2% in January 2017, but it did not subsequently exceed 2% until early 2018, and then dropped again to the present level. That persistence doesn’t appear to the layman’s eye to reflect the temporary pattern that FOMC participants seem to see – notwithstanding their recent references to current component price movements that are presently below target and viewed as transitory. 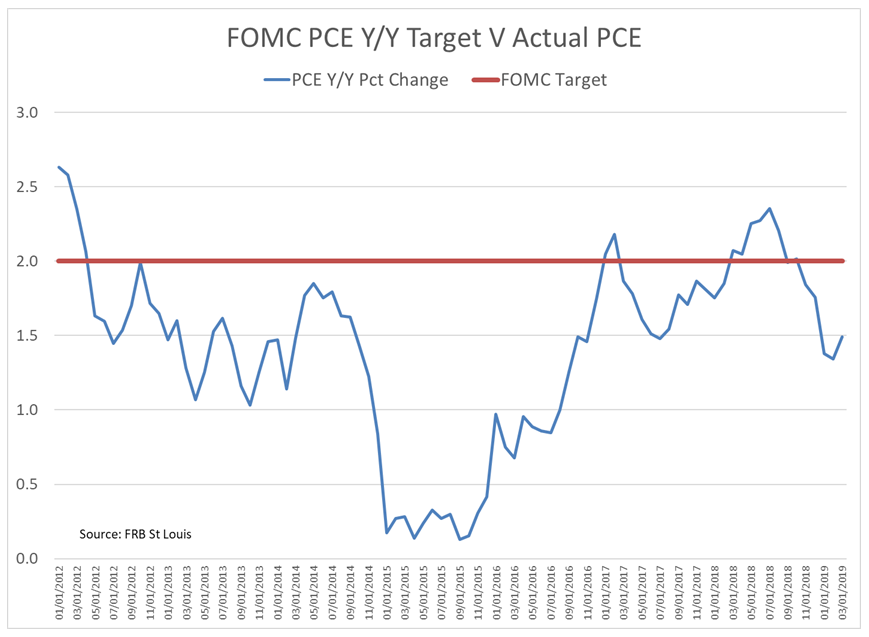 The constant speculation about likely rate increases or decreases is rooted partly in the FOMC’s communications policies and the market’s lack of understanding of what the FOMC’s reaction function is to deviations from its inflation target and unemployment objectives. The FOMC does not have an explicit unemployment objective, since its position is that it can’t affect real outcomes in employment or long-term economic growth through the use of monetary policy. But given the Committee’s specific inflation target, it is reasonable for markets to ask the following set of questions.

Absent a clear understanding of how the FOMC views its policy choices, markets are left to speculate. Revealed preference on the part of the Committee at least provides circumstantial evidence about the FOMC’s reaction function. In the current conflicting-signal environment, the FOMC has proved willing to tolerate inflation’s remaining persistently below target for an extended period of time (i.e. many years), given that growth is about on trend and consistent with the Committee’s forecasts. The watchword in this case, reiterated many times and again in the May minutes, is that the Committee can be “patient.” What it will do in other circumstances we don’t know. We suspect, given the Committee’s ongoing review of its policy framework and balance-sheet normalization, that it will deal with the circumstance when it is time. It is probably unrealistic to expect the Committee to be willing to commit to policy reactions in advance. Hence, the speculation will continue.