The inference was that the Fed was embarking upon a massive injection of funds into short-term money markets. That is, the first three offerings of $500 billion each were but the first of a much larger potential program to be played out over March and April and possibly subsequent months.

The program actually began on March 12 with a $500-billion, 84-day offering, followed on March 13 with two $500-billion offerings, one of 84 days and one of 31 days. A lot has happened since then in terms of government and Fed efforts to brace the economy against the costs of the coronavirus pandemic. For example, the Fed subsequently announced nine additional $500-billion offerings to be executed through April 13. Most recently, the Fed announced resumption of emergency lending facilities to money market funds and primary dealers, and even actions, which will begin shortly, to support the muni market.

Against this background Cumberland has been publishing daily updates on the Fed’s repo facility, and it is time to assess what has actually happened. The bottom line is that there have been few signs of liquidity problems in short-term markets, and the total takedown of potential offerings has been very small. In other words, the massive injection that people expected never happened. This means either that there have been no problems or else that the demand for Treasuries and MBS from the private sector has been so great that dealer inventories are small and there is no need for the extra funding. So let’s look back at how the NY Desk’s repo (reverse repo – remember, the Fed’s terminology is from the counterparty’s perspective) actually worked.

First, some operational details. The Desk announced a monthly schedule of proposed daily transactions ranging from overnight repos to term repos of various maturities including 11 days, 13 and 14 days, 28 and 31 days, up to 84 days. The $500-billion offerings have all been for at least 28 days or longer. The shorter offerings have been for $45 billion, except for one $50-billion, 25-day offering on March 12. As for the overnight offerings, they were increased from $100 billion on March 4 to $150 billion on March 9 and later that week it was boosted to $175 billion on March 11. 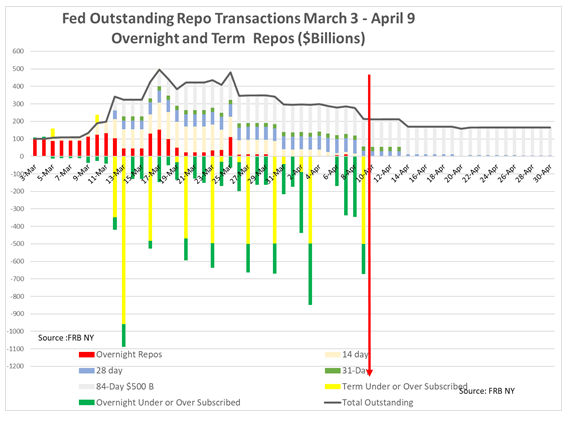 Total outstanding amounts peaked on March 18 and remained over $400 billion through March 25 but have declined steadily since then. Interestingly, overnight financing remained under $4 billion from March 30 through April 9 and summed to only $ 40.25 billion out of a possible $1.8 trillion of overnight financing over that period. Use of the longer-term offerings thus far has also been far below capacity. Over the same March 30–April 9 period, only $7.25 billion out of a possible $2.1 trillion was taken out.

Overall, conditions appear to have moderated in the repo market. We will look forward to monitoring the other emergency programs that the Fed has put in place as data become available. We need to avoid being complacent about financing conditions. With the additional borrowing the government has to do in order to finance the emergency spending programs that have been put in place, plus others that may be in the pipeline, we can only imagine what the dealer financing needs are likely to be and how much of that borrowing will ultimately end up on the Fed’s balance sheet.