Half a century ago, Arthur Okun was an American economist who served on the President’s Council of Economic Advisers as chairman and before that was a professor at Yale University. Among Dr. Okun’s many contributions to the field of economics, one of the most memorable is the Okun “misery index.” This index summed the seasonally adjusted unemployment rate with the inflation rate and was meant to reflect the economic as well as the social cost that soaring levels of both inflation and unemployment were imposing on the economy. And in the late 1970s, with both measures at double-digit levels, the nation was indeed feeling that misery.

In 2020, we face twin challenges again: unemployment brought on by the pandemic and the very real health issues caused by COVID-19 infections. We have tried to capture the despair caused by these challenges on a state-by-state basis by combining a state’s unemployment rate and its current COVID positive test rate. We are going to take our State of Despair Index and apply it as a variable in our credit-scoring model, as well. A couple of shout-outs are called for here. We would like to thank Dr. Steve Green, professor of economics at Baylor University. In a conversation, Steve and I were discussing the late Arthur Okun, his misery index, and his output-gap index of the 1970s; and out of this discussion came the State of Despair Index. We also want to thank Ms. Jane Mousseau of Group SJR in New York for her contribution of the “State of Despair Index” name. 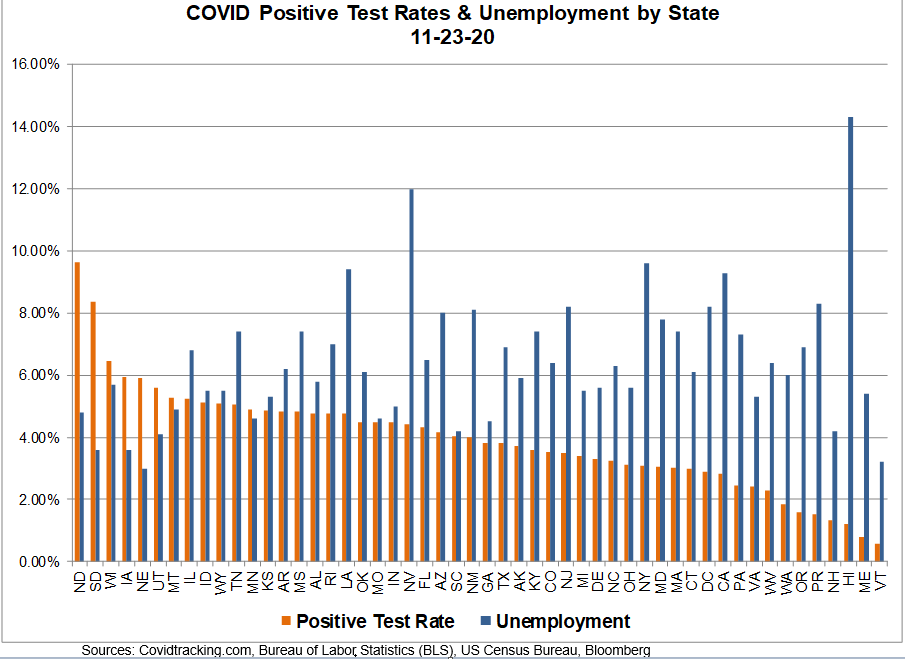 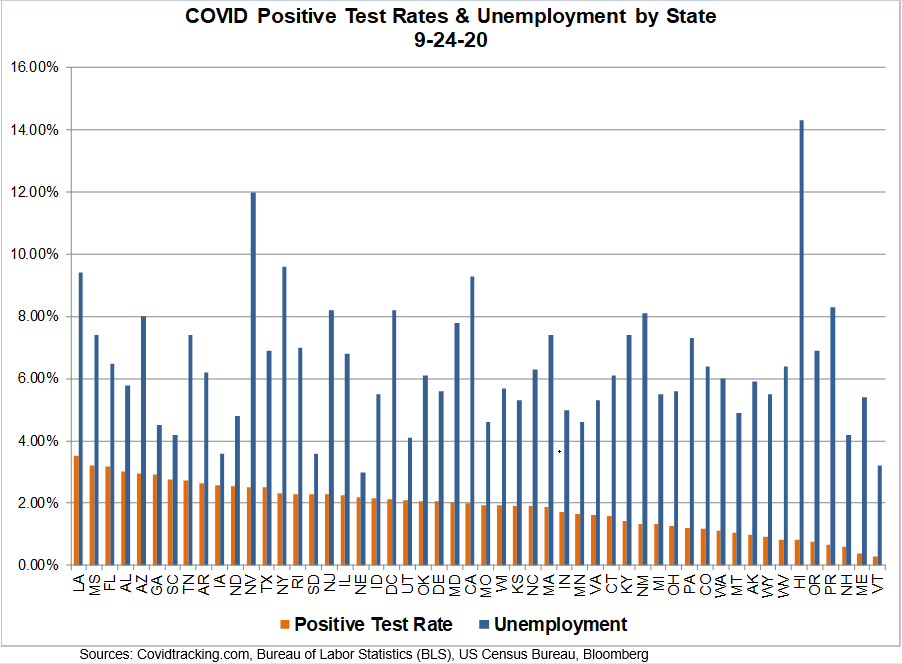 Back in September, the unemployment rates were much less consistent by state, and COVID positivity rates were much lower, as the second wave had not really started at that point. The highest positivity rates were in Louisiana, Mississippi, Florida, and Alabama. One consistent fact is that Vermont and Maine had very low positive test rates both then and now. Maine was very restrictive about who could enter the state through the summer and insisted on two-week quarantining for anyone entering the state from a “watch list” state. 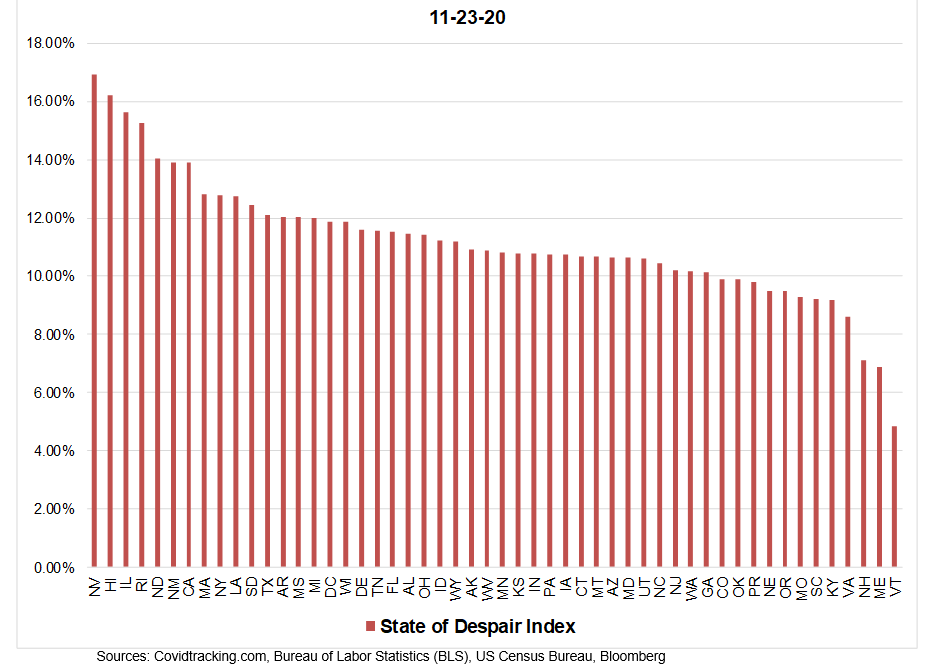 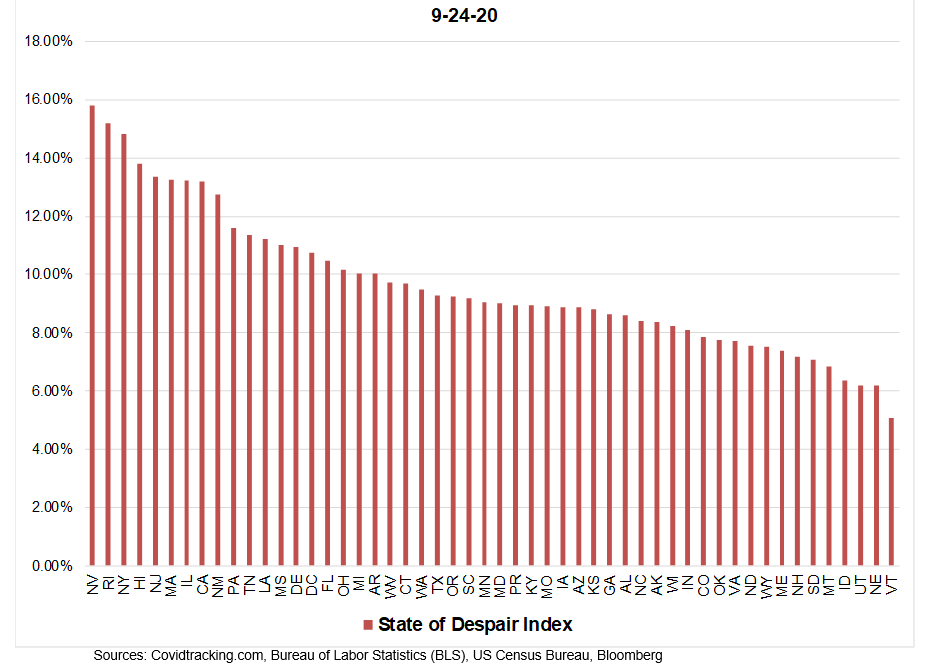 In the two charts above we see the State of Despair Index (which, again, combines the COVID positive test rate with the unemployment rate) for November 23 and September 24. The State of Despair Index displays a large range, from a high in Nevada at 16.92% to a low in Vermont at 4.85%. The leaders on this list are not surprising: Both Nevada and Hawaii are dependent on tourism, and COVID has devastated that industry. The next two leading states are not as obvious. Illinois, a large state, is certainly dominated by Chicago; and Rhode Island, a small state, saw a pickup in COVID infections this fall, centered around its colleges.

The five leaders in the Despair Index have decidedly different makeups in their component scores for November 23:

Two months ago, the Despair Index was a little different. The five leading states then were these:

So, we have the consistent Despair Index leader, Nevada, with second-highest unemployment and a moderate positive test rate. Hawaii has by far the highest unemployment rate and third-lowest positive test rate in the nation. Hawaii, with its low positivity rate, has borne a disproportionate share of the despair, as few people are visiting there from other states or countries due to travel restrictions. That situation should change as the vaccine makes its way into the general populace.

Two members of the top five in the September 24 Despair Index, New York and New Jersey, have now moved to 8th and 37th respectively. The bad news is that we now have many more states above the 10% despair threshold than we had two months ago.

Starting in the early months of this year, we charted the Despair Index for five states, with a broad geographic mix: California, Florida, Illinois, New York, and South Dakota. All of the graphs show a similar pattern, with a sharp upswing in COVID in the early months of the pandemic, March and April, then a drop as we got to the latter part of the summer, and then a rise again in the past few months, with South Dakota picking up strongly in October and November because of its upsurge in COVID infections. 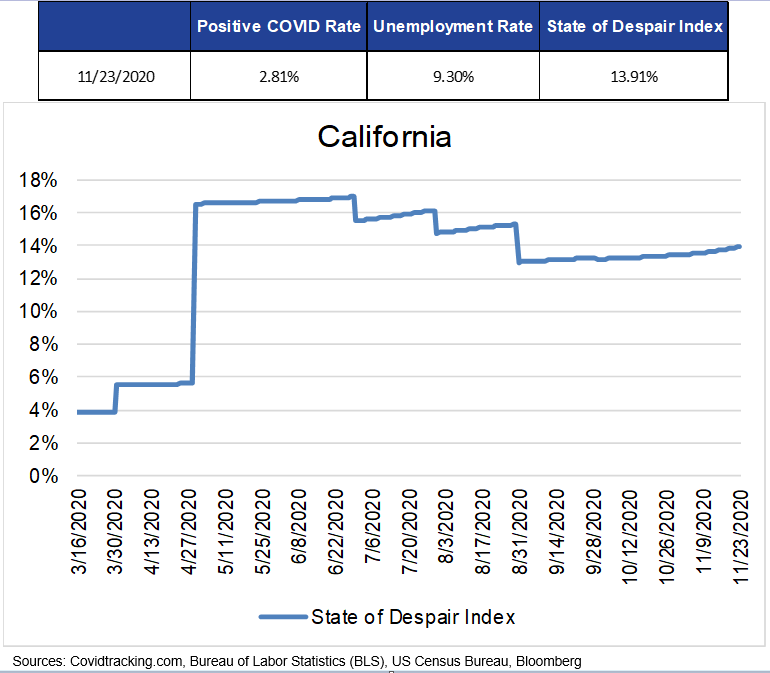 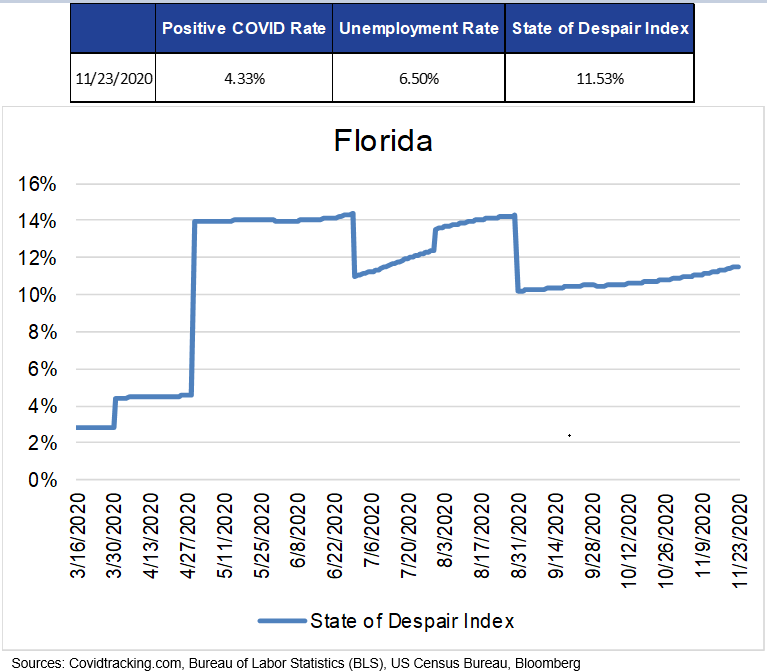 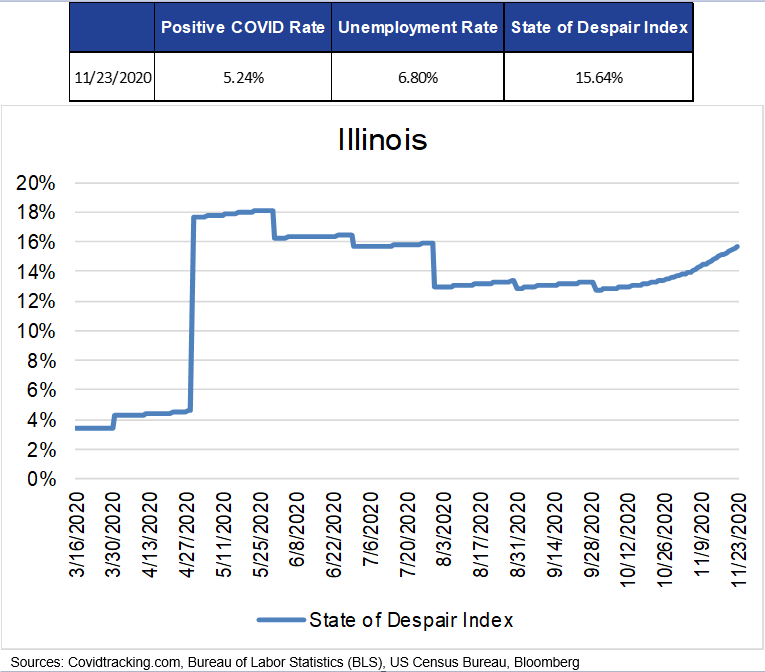 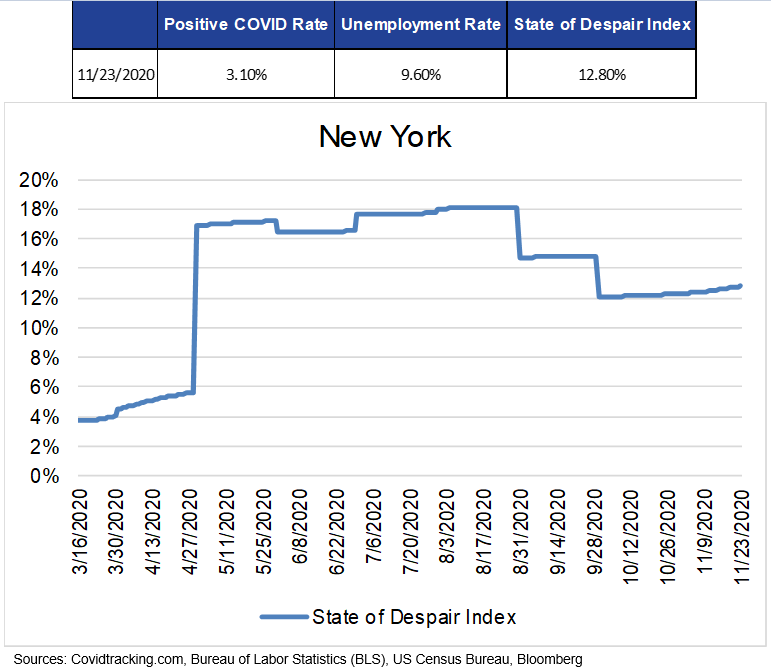 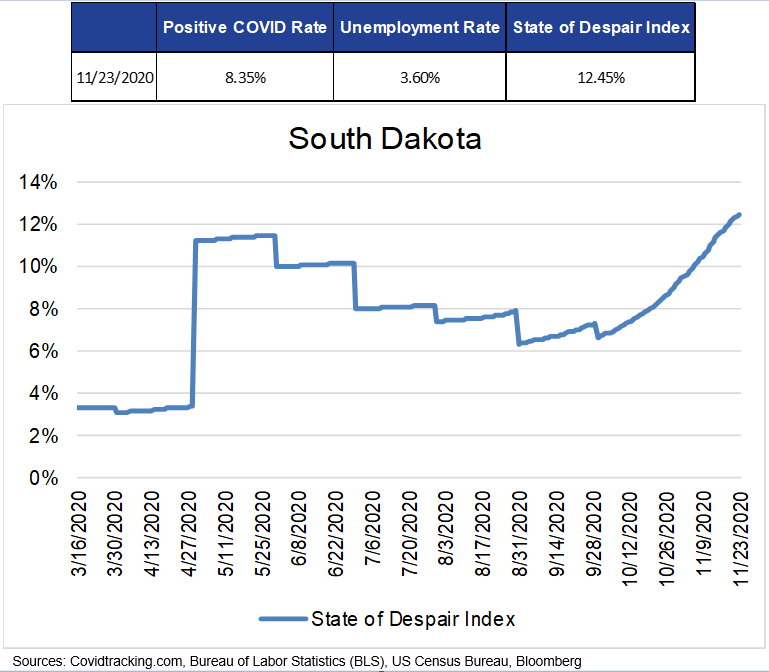 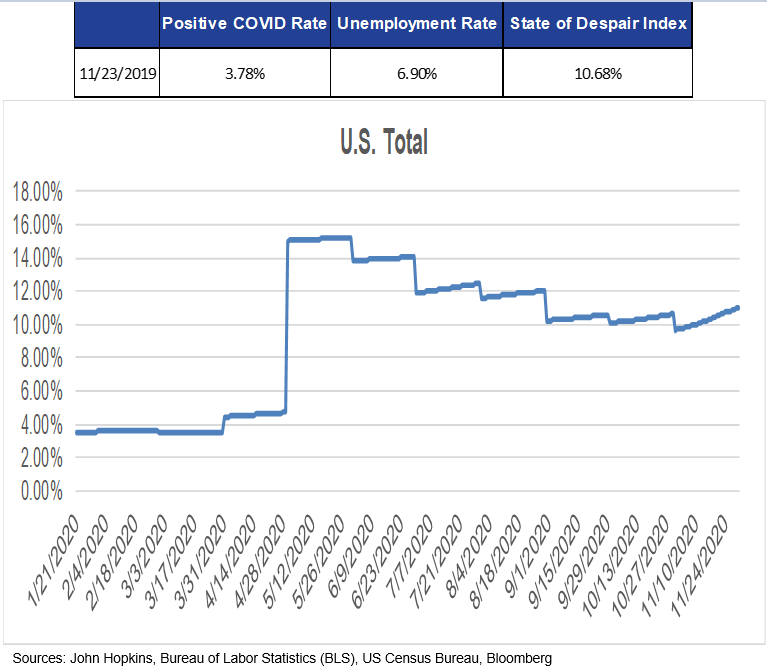 Clearly, the introduction of vaccines will shift the Despair Index downward. What we do not know is the velocity of this shift. There is no doubt that we will first see the shift downward as COVID cases decline, and then we would expect unemployment to follow.

COVID has now been described by many, including the credit rating agencies, as a social risk (social as in ESG – environmental, social, and governance) that needs to be evaluated. For example, the shutdown of non-COVID services at a hospital, or reduced demand for those services due to fear, results in less revenue in the face of increased costs for safety equipment, processes, and procedures.

The pandemic has accelerated all sorts of changes – changes, for instance, in telecommuting and telehealth, raising the need for greater broadband capabilities and cybersecurity. The pandemic has also revealed and widened disparities between high-income and low-income jobs, with higher-income earners mostly able to keep working from home and many low-income earners, such as hotel and restaurant workers, losing their jobs. The affordability of basics like food and healthcare then becomes a critical issue.

Municipal employees – teachers, healthcare and social-service safety-net workers – are all on the front lines of fighting the virus, and municipalities are bearing the cost while at the same time enduring reduced revenues.

The Despair Index will be used to adjust our credit scores, with a negative adjustment if the index is above the median value. The components of the index, unemployment and COVID positive test rates, will also be considered. A high Despair Index adjusted score relative to the average rating agency rating will trigger a review of that credit, so that we can stay ahead of negative rating actions. And in addition, we are also looking at the diversion between the unemployment rate and the COVID rate.  Hawaii is a perfect example with a small infection rate (for reasons of distance and density clearly) but soaring unemployment as their economy, so dependent on tourism, has borne the brunt of the shutdowns, slowdowns and lack of travel in the other 49 states.  On the other side are the Dakotas, where their unemployment is low and current infection rates high.  Their economies are focused on agriculture, food processing and technology, all areas in demand during COVID and the infection rate spiking has been more recent.  Clearly the concern is that the health issues don’t resolve and spill into slower economies.  So, it bears watching. And, unemployment is probably understated. The U6 measure of unemployment which includes part time workers as well as underemployed workers would clearly be higher across all states.

For Cumberland, the State of Despair Index is a work in progress, and it is our fervent hope that it is a less relevant part of our quantitative analysis down the road which will mean a drop in both infection rates as well as unemployment and a return to whatever the new normal would be. But as with all things regarding municipal credit, the Cumberland State of Despair Index is dynamic, not static.