Congress and the Trump administration have embarked upon a massive federal stimulus program to mitigate the impact of the coronavirus on the US economy. At the same time, the Federal Reserve has stepped up to bolster financial markets, having announced, in addition to its ongoing support of the repo market, a series of ten loan programs, some old and some resurrected from the 2008 financial crisis.

So far, markets have responded relatively favorably to the announced programs and have backed up from their lows. But aside from the injection of funds to support business in the first Congressional stimulus program; the markets’ response has been based only on hope rather than tangible evidence that the programs are having the desired effect. The $349 billion in the Paycheck Protection Program was quickly exhausted, but Congress expanded the amount by another $310 billion on April 24. It is too early to be able to assess the impact of the first round of relief on the economy, let alone that of round two.
As for the Fed programs, four are extensions of programs that were put in place during the 2008 crisis. They are the Primary Dealer Credit Facility (PDCF), the Money Market Fund Liquidity Facility (MMLF), the Commercial Paper Funding Facility (CPFF), and the Term Asset-Backed Securities Loan Facility (TALF). These programs were designed to support financial institutions and the functioning of key segments of short-term money markets. Five of the remaining six programs extend the Fed’s reach to supplying credit to nonfinancial entities. These programs include two programs that support corporate borrowing (the Primary and Secondary Market Corporate Credit Facilities [PMCCF and SMCCP]), two programs for smaller firms (the Main Street New and Expanded Loan Facilities [MSNLF and MSELF]), and a program to support the municipal securities market (the Municipal Liquidity Facility [MLF]). Finally, the Fed also created the Paycheck Protection Program Lending Facility (PPPLF), which would enable the Fed to provide liquidity to financial institutions where the collateral is government guaranteed loans made under the Paycheck Protection Program. Those loans are typically made by banks through the Small Business Administration, which is managing the PPP.
Although, as with the Fed’s repo program, the potential amounts could be huge, to date little has happened in terms of implementation of the programs, and the channeling of funds to their projected uses has yet to take place. The following chart shows what we know about the programs to date. The first two programs (MMFL and PDCF) were announced on March 25 and were a little over $30.6 billion and $27.7 billion respectively. Since then, use of the MMFL has ranged between $52.7 billion and $48.8 billion as of April 22. Use of the primary dealer credit facility has been smaller, ranging between $27.7 billion and a high of $33.4 billion. By comparison, the PDCF peaked at about $148 billion in the third quarter of 2009. 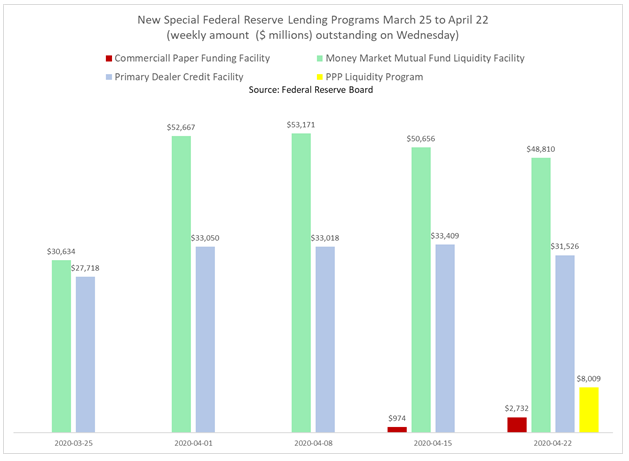 The two other programs that have just gotten off the ground are much smaller. The Commercial Paper Funding Facility is now only at $2.7 billion, whereas during the financial crisis it got as high as $224.2 billion in January 2009. The newest program to start is the PPP Liquidity Program, and it is only at $8 billion as of April 22.
What we see is that compared to past usage, most of these current programs are quite small, and therefore it is difficult to determine what positive effects they can or will have on markets. The other programs have yet to be operational, but we will monitor them all and report on their likely impacts in future commentaries. As mentioned at the outset, the positive effects that have been realized are largely expectational and not rooted in hard performance numbers yet.
Robert Eisenbeis, Ph.D.
Vice Chairman & Chief Monetary Economist
Email | Bio