To no one’s surprise, the FOMC in its June meeting reaffirmed its 0–25 basis-point target for the federal funds rate. Markets did not react well, especially since the announcement came on the heels of a fairly downbeat assessment by Chairman Powell regarding the expected slow path for the recovery and the problems in the labor market. The statement itself had little useful information.

It focused on the pandemic, the sharp decline in economic activity, and the risks posed to the economic outlook. The Committee indicated that it will keep rates at the present level until the economy has weathered the downturn and is on track to achieve the Committee’s statutory goals. It went on to indicate that it will use its tools to support the economy, and to that end it will continue to support the flow of credit and the smooth functioning of financial markets through continued asset purchases in support of accommodative financial conditions. These broad statements were remarkably short on specifics.

We received more substance during Chairman Powell’s post-meeting press conference, which had several themes. He focused on the pandemic as both a domestic and an international external shock that had essentially shut down the US economy almost overnight. He painted the Fed’s responsibility to cushion the blow by facilitating the smooth functioning of the economy, and he said that he viewed the current policies as appropriate at this time. He noted that the Fed has deployed its full array of tools to meet the challenge by quickly setting its policy rate to between zero and 0.25%, by using forward guidance and asset purchases, and by creating emergency lending facilities. It is also, he said, considering other actions, such as affecting the shape of the yield curve. Powell emphasized that the Fed would use its powers aggressively and proactively, and he noted pointedly that the majority of the emergency programs put in place were lending activities, not spending policies, for which the Fed has no authority. He asserted that as soon as the crisis is resolved, those emergency actions will be terminated. But for the time being, he saw policy as accommodative.

One piece of evidence on policy accommodation can be gleaned from the Chicago Fed’s Index of Financial Conditions, shown below from December 2019 through last Friday. 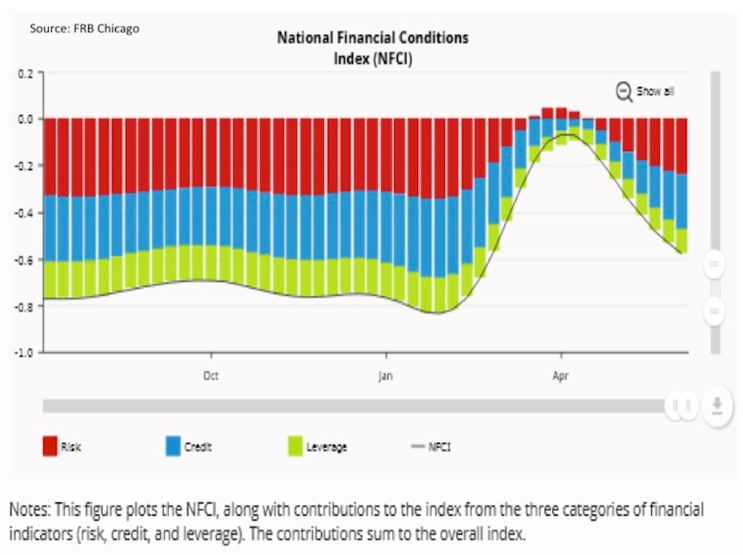 We can see that policy accommodation was gradually tightened from January of this year, but then conditions eased as the FOMC cut rates to zero and accelerated its asset purchases and other support policies. Noteworthy is the fact that, despite these actions, the index is still not where it was in mid-January.

The second major theme in the press conference was Powell’s focus on the labor market. He emphasized the improvements in labor market conditions reflected in the May employment report. But his discussion failed to recognize the impact that misclassifications had on those data. Had the data been properly considered, the unemployment rate for May would have been much higher than the cited 13.3% number and actually would have been higher than April’s number, not lower, as Powell suggested. Powell’s discussion also included a deep dive into various indexes, concerning the people impacted, including furloughed workers, those out of work, and those who might have extreme difficulties getting back into the labor force. One noteworthy point that Powell made was that the Fed had learned the economy could tolerate a much lower unemployment rate than the Fed had thought it could without engendering an increase in inflation. He gave the impression that this experience will likely condition the Fed to pursue accommodative policies until the labor market recovers, and that the Fed’s inflation objective will likely take a back seat until that objective is achieved. Not only did Powell discuss the employment situation, but he also devoted significant attention to the challenges that workers with different skills and in various industries will face as they try to get back to work. Those who lost their jobs as their firms went under will face a much longer and more challenging task than those who can simply go back to their old jobs. The picture Powell painted for the labor market was one of slow recovery, with different recovery speeds for different industries and for displaced workers.

A third major theme related to widely published reports that the FOMC will be on hold with its policy rate for two years (https://www.france24.com/en/business/20200611-us-federal-reserve-to-keep-interest-rates-near-zero-for-two-years). That inference was not drawn from the FOMC’s statement or from any commitment made by Chairman Powell but rather from the information contained in the FOMC’s summary of economic projections (SEP) that accompanied the policy press release. The SEP had the federal funds rate target at 0.1% through 2022, and the dot plots showed that all of the participants had the funds rate at 0.1% through 2021 and only two had a higher rate in 2022. But Powell made it abundantly clear that the SEPs were not the result of an FOMC decision but rather they were an input to their discussions. More broadly, the SEPs, shown below, anticipated negative GDP growth through the end of 2020, a large pickup in 2021, and slightly slower growth in 2022. 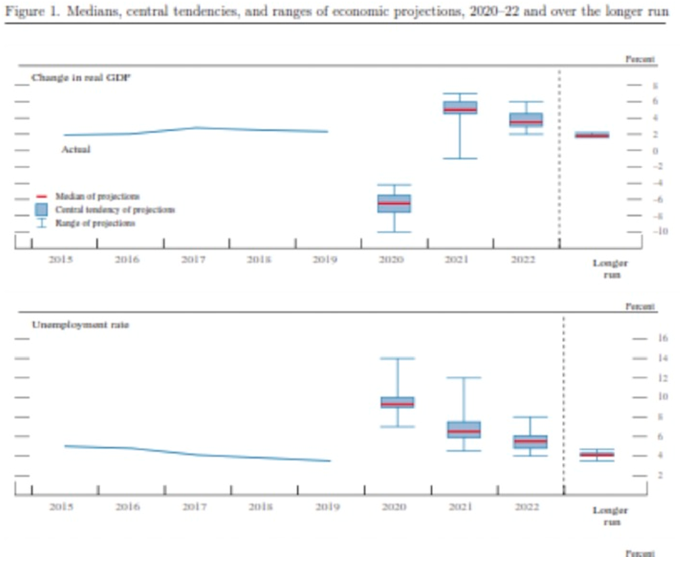 But there was no change in participants’ expectations that the longer-term growth path for the economy is about 2%. Commenting on the pace of the recovery, Powell continually and appropriately focused on the pandemic and the uncertainties it creates for assessing and preparing economic forecasts. We should remember that, to economists, uncertainty is a technical term (attributed to Frank Knight) that means it is not possible to assess the probabilities of possible outcomes. Uncertainty is, then, distinct from risk, for which we do have the ability to assign confidence intervals for given probabilities around outcomes. In response to these uncertainties, Powell said the Committee would just have to wait for more data to see whether, for example, a resurgence of cases occurs this fall or whether we are able to continue our gradual climb out of the current shutdown. When pressed on when the Fed would reverse course, Powell responded that they were “not even thinking about thinking about raising rates.”

There were two other areas touched upon in the press briefing. Powell expressed concern about racial inequality and the need to address it. In addition, he implied the need for additional fiscal responses to COVID-19 but carefully sidestepped giving specific advice to Congress. But when pressed, Powell repeated – and the point was reiterated by Robert Kaplan on Sunday – that additional fiscal stimulus might be required and appropriate for the future, even as he clarified that this was an issue for Congress and not the Federal Reserve. Both of these discussions were atypical of what we normally see after FOMC meetings.