Sometimes the light’s all shinin’ on me
Other times I can barely see
Lately it occurs to me
What a long strange trip it’s been
“Truckin,” by the Grateful Dead
(Lyrics by Robert Hunter)

Those great lines from a great song sum up the 2020 investment year in general and particularly in munis, as we look at the markets before the pandemic, in the middle of the March collapse, and now as we near the end of the year.

We can see how low US Treasury rates and municipal bond rates had both fallen at the end of 2019. A lot of the drop in rates was due to US rates “catching up” with those in Europe and Japan. We see very low tax-free to Treasury yield ratios. It’s important to remember that these are AAA yields, and most of the state general-obligation paper in muni markets yields more than this.

By mid-March we see s the full-blown turmoil in the muni market. But remember, this turmoil was not limited to just tax-free bonds; corporate bonds, stocks, oil – all were plummeting. This was a liquidity event, not a credit event, as we have previously written. The chart below shows the bond fund outflows, which were unprecedented. 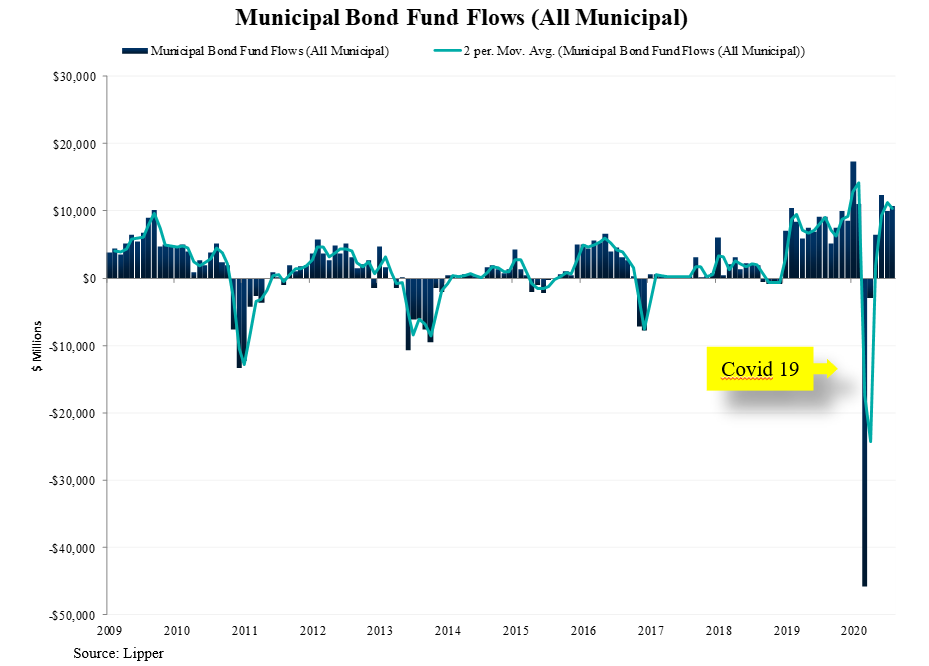 The bond fund outflows of March followed the downdraft in oil prices caused by the onset of the pandemic, which caused the sharp sell-off in the stock market. 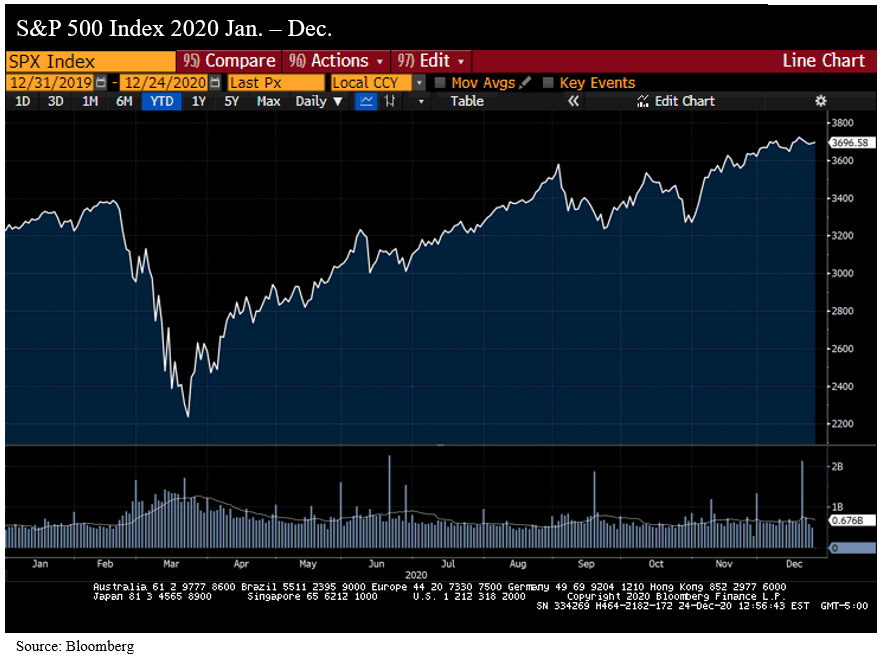 This grab for liquidity produced what we saw in March, with Treasury yields falling precipitously and yields on munis, as well as other instruments, moving significantly higher. The yield ratios seen in the March 20th chart are unparalleled for muni cheapness. We saw AA and AAA state general-obligation bonds with maturities less than four years yielding 10 times as much as Treasurys (3.0% vs. 0.3%). In 35-plus years of managing bond portfolios, this author had never seen that anomaly until this year.

As we know, the cheapness didn’t last long. Private money moved into the space abandoned by the bond funds, and it happened in a fairly short period of time. The rebound at the end of March was one of the most vigorous muni rallies ever witnessed. By the end of the month, muni bond yields, while still cheap to Treasurys, had closed two-thirds of the gap. Clearly, there was little issuance in March and indeed for the next month plus, as most issuers took a wait-and-see attitude to issuing bonds until the storm settled down.

The balance of the year saw continued improvement in the muni market. The CARES Act of March helped state and local governments, and the Municipal Liquidity Facility of the Federal Reserve provided a $500 billion vehicle through which issuers could sell short-term notes directly to the Fed. The fact is, however, that few issuers took advantage of this facility, as the Fed’s terms were somewhat arduous and issuers had to prove they could not adequately access the market. The lack of use points out the liquidity of the overall muni market, as well as the fact that issuers could get bank loans at better terms. But it’s very important to remember that the very fact that the Fed set up the facility was a big factor in the market’s returning to normal. The message of the Federal Reserve to the bond markets was “WE HAVE YOUR BACK.”

As we close the year, we can look at the chart and see that the muni market is essentially cured from a functionality standpoint. Muni yields across the board are significantly lower than they were at the start of the year, and in the short end they are MUCH LOWER. Compared to the end of March, when the muni market had righted itself, overall yields are also much lower, particularly in the shorter end of the yield curve, reflecting the lowering of short-term interest rates by the Fed in March and the return of liquidity to the market in general and the short-term market in particular.

Municipal credit has been resilient through the pandemic. Yes, there have been some downgrades, and there will be more. But the most salient feature of high-grade municipal bonds has shone through in 2020, and that is the fact that municipal issuers enjoy a monopoly on taxing power and the provision of essential services. And as we have seen in this past year, the larger infrastructure-type issuers enjoy broad institutional support from both the investing public and Congress. And just as important, even issuers with structural problems, such as New Jersey and Illinois, still have broad municipal market access, albeit at higher yields than the market.

To say all this is not to discount the fact that state and local governments will need some further help. As we write this, they were not included in the latest stimulus bill, which the president has finally signed. But they will benefit in a secondary sense from the spending by individuals and by corporations able to take advantage of another round of PPP. We think that the new Congress in 2021 will add another bill that addresses direct aid to state and local governments. There is still plenty of distress out there.

Earlier this month we showed you our Cumberland State of Despair Index, which combines COVID-19 infection rates with unemployment rates by state (https://www.cumber.com/cumberland-advisors-market-commentary-the-cumberland-state-of-despair-index/). 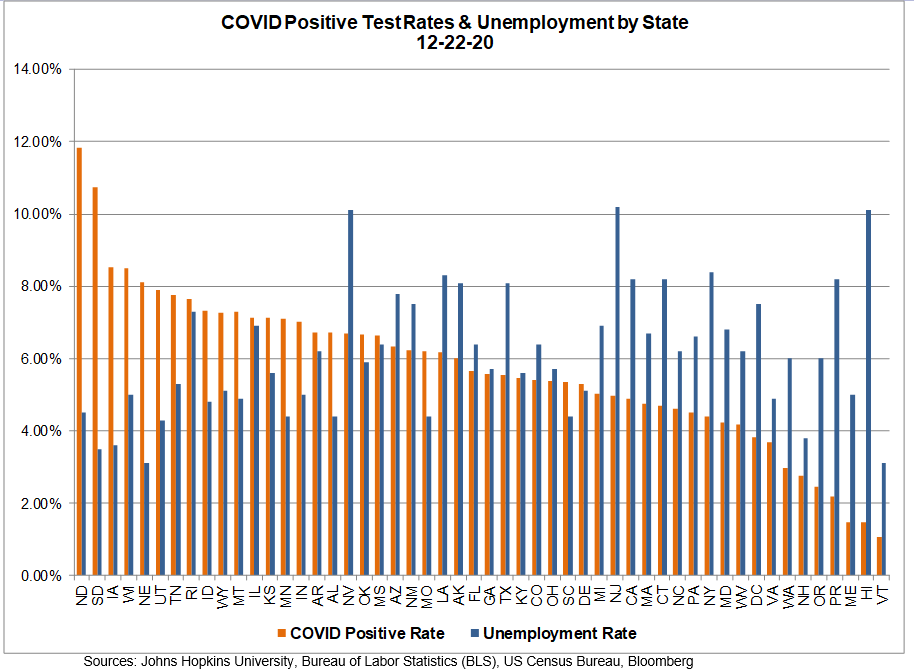 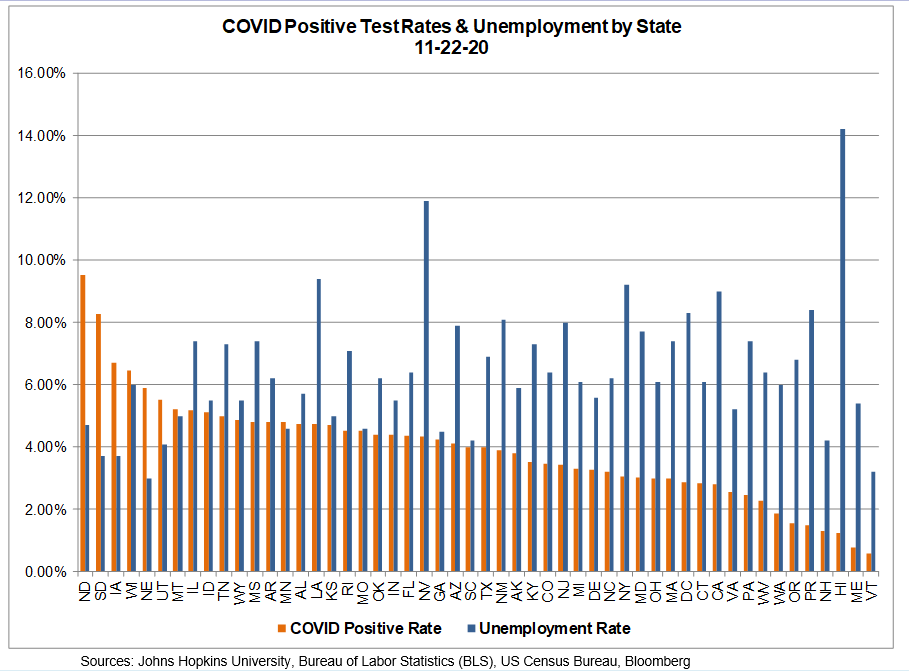 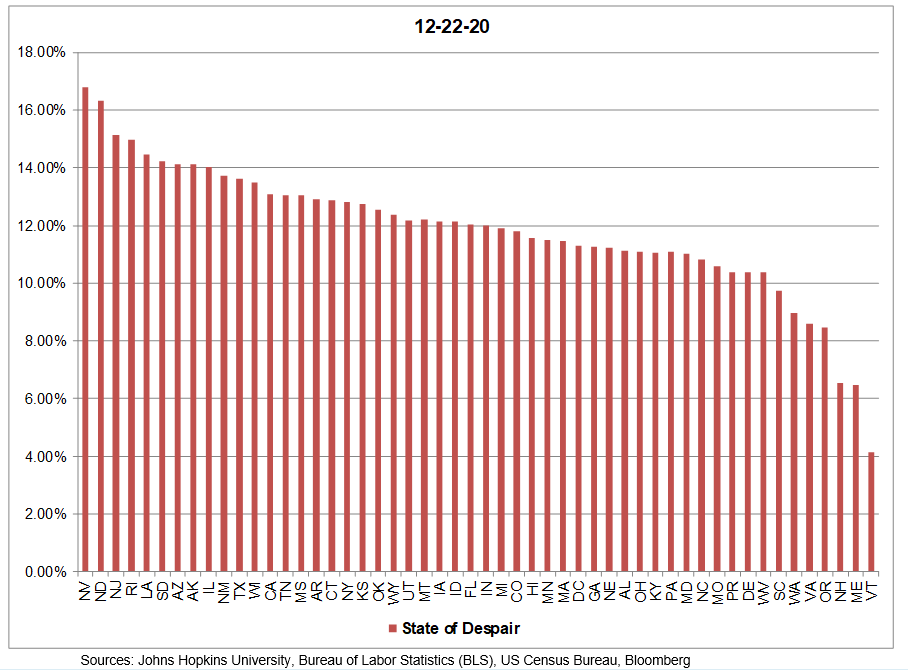 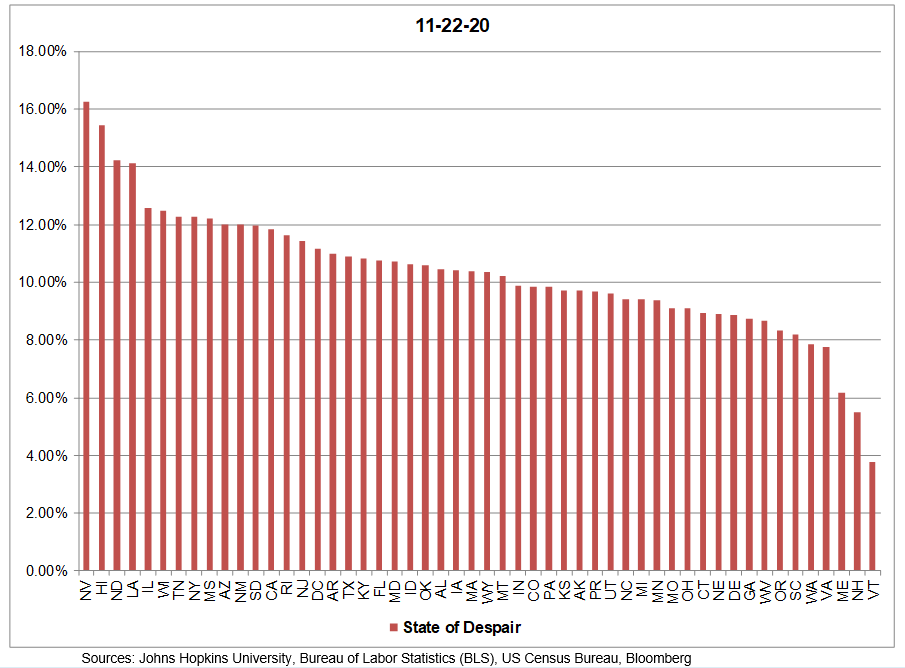 The index charts show the COVID infection rates and U-3 unemployment for each state for September 24 and November 23 and then the combined results for the “state of despair” on those dates. One stark result: The State of Hawaii registered very high in the Despair Index because, while the state has a low COVID infection rate, its unemployment rate (no tourism) has skyrocketed, and the economy has suffered greatly. It is still suffering but less intensely now on the jobs front, with the unemployment rate having dropped 4% from Sept. 24 to Nov. 23. There is no doubt that vaccines should help both measures of despair to go lower over time, and we pray that the overall Despair Index will downshift as we move into 2021. In December we have seen Rhode Island and New Jersey move into the top five, and of course it is no surprise that the two states have had to endure more lockdowns this month. We will update these Despair Index charts regularly.

As we enter 2021, we are very focused on the January 5th Senate runoffs in Georgia. A Democratic victory in both races puts that party in control of both houses of Congress, along with a new Democratic administration led by President-elect Biden. Our view is that this outcome would lead to more spending – in greater amounts and on a faster pace than if the Republicans hold the Senate, which they can do with a Republican outcome in either race. We think bond market participants will start to discount increased spending, and perhaps a higher inflation rate, and that may cause yields to rise. We believe this will happen even with a Republican Senate, although at a slower pace. We think President-elect Biden still has good relationships with Senators who were in office when he was a Senator more than 12 years ago, and those relationships should foster some measure of greater cooperation, in any case. We think we’ll see rates back to where they were at the end of last year; but certainly, halfway between where they were then and where they are now is a reasonable approximation of where we think yields will be mid-year.

The long strange trip of 2020 will hopefully give way to a better trip in 2021, with some degree of normalcy. We wish all of you pleasant holidays and best wishes for next year. The American economy has shown its great resilience and its ability to come back from other crises, and we believe it will do so this time, too. We hope that we will soon be doing some meetings in person and flying for some business as well as for fun, and that stadiums and hotels will be full. Happy Holidays!

Originally sent via email to subscribers: Check it out.