In our previous discussion of the three options facing the FOMC – raise the funds-rate target, hold the rate steady, or cut the target rate – we argued that there were risks and potentially negative consequences associated with each.

The first option would shock markets and raise questions about the Committee’s rationale, regardless of what the communication might be, generating negative press for the FOMC. The second option would only trigger the speculation “if not now, when?” The third would risk an “I told you so” from the president – he had already begun questioning the FOMC’s competence following the release of the second-quarter GDP number on Friday, July 26. Moreover, that option would trigger additional demands from market participants for more and more cuts, regardless of the consequences.

We argued that the first estimate of second-quarter GDP would be a critical number, as it relates to the justification for the FOMC’s decision; so let us look at what is in the GDP report. The attached chart shows the breakdown of the contributions of the various key components behind the 2.1% growth that was reported.[1] There is something for FOMC participants to latch onto in order to support either their preference for a cut in rate or for no change. 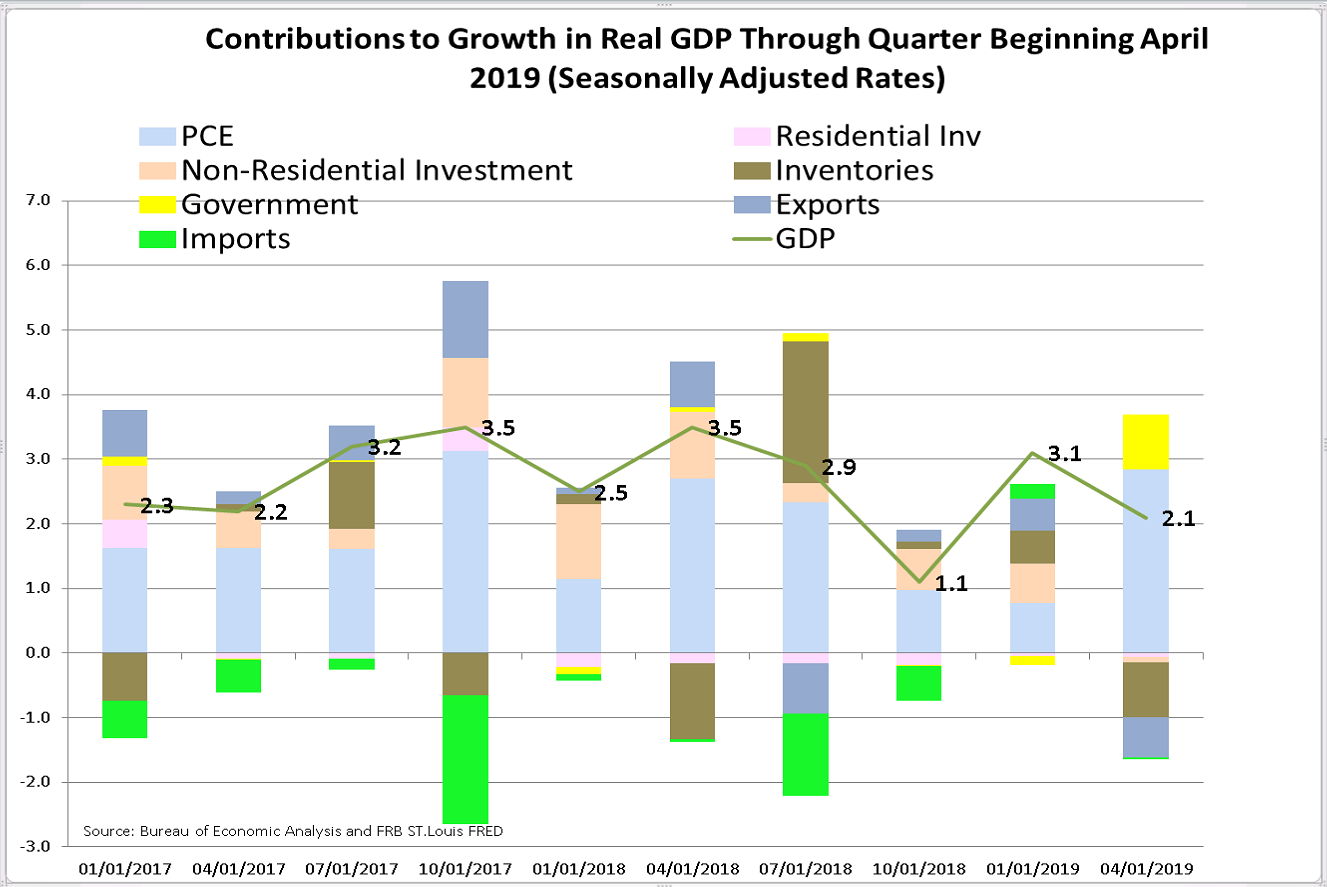 As mentioned, GDP growth came in at 2.1%, which is exactly what the FOMC SEP projections had for all of 2019. That GDP number exceeded the most frequently mentioned expectation of 1.8%. Other positives were new home sales in June that were 42K above those in May, durable goods orders that were up 2% after being down 2.3% in May, and weekly jobless claims that were at 206K, down from 216K the previous week. Corporate earnings were largely positive as well.

But putting all these numbers aside, this quarter’s GDP number contained a couple of interesting twists. Only two categories accounted for the positive growth – consumer spending and government spending. The consumer number is especially interesting since it accounted for 2.9 percentage points of growth, while government spending added 0.9 percentage points. That consumer spending contribution is second only to that in the last quarter of 2017, when overall growth was 3.5%. Two main components account for most of the negative contribution to growth: Inventories subtracted 0.9 percentage points, and exports took off another 0.6 percentage points. Nonresidential fixed investment was virtually nonexistent and subtracted another 0.1 percentage point. Finally, there is a wild card in trying to figure out how much of an impact the problems with the Boeing Max 737 may have on both domestic production and international trade. We know that the Saudis have cancelled a 50-plane order, and there have been related cuts in parts and components as well. Mike Englund of Action Economics estimates that Boeing’s impact took about .2 percentage point off of GDP growth in the second quarter and without the Max problem export growth would have been -3.2 instead of -5.2% and equipment growth would have been 2.7% instead of only .7%.[2]

For those FOMC participants who have given great weight to the global slowdown, the large negative contribution of exports will be a point of focus, along with the anecdotal evidence that business investment is off because of uncertainty about a global slowdown and concerns about trade and trade negotiations. We note that these two factors were points of emphasis in Chairman Powell’s recent testimony on monetary policy. However, it is hard to fathom how a cut in rates would counter either of these concerns. So we are left with a dichotomy and dilemma for the FOMC. The domestic economy is on track and meeting forecasts. Moreover, PCE inflation came in at 2.3%, slightly above the FOMC’s target. On the other hand, the international side is not doing all that well and the trade issues look likely to persist for some while.

It is uncertain how the FOMC will come down on this mix of evidence, especially when it isn’t clear how a rate reduction at this time will address any of the key concerns. Regardless, the FOMC will be faced with a challenging communications effort to sell whatever it decides to do but will likely face political pushback: The president will claim vindication if a rate cut is forthcoming or continue questioning the FOMC’s competency if no rate change is forthcoming, and markets will cry out for even more cuts at subsequent meetings.

[1] We need to keep in mind that sometimes the number can be revised significantly when the final trade numbers are received. There were also significant reductions in prior quarters’ numbers as well reducing 2018 growth to under 3%.
[2] See Mike Englund, Action Economics, “Impact of the 737 Max Grounding on GDP.”