Though we are still sorting out last night’s election, the so-called “blue wave” of a Democratic sweep of the White House, Senate, and House of Representatives didn’t happen.

At this hour, the White House is still not decided; it appears the Senate will NOT switch and will stay Republican; and the Republicans made a few gains in the House, but it will remain in Democratic control.

The graph below shows the intraday yield of the 10-year US government bond. You can see yields rising from October 15th to the 23rd.  This was “prime time” for the blue wave conversation’s entering the bond market. The logic was simple. A Democratic triumvirate of White House, Senate, and House would produce more spending, social programs, and a higher level of inflation expectations. During this period of rising yields, we witnessed a large increase in the number of “short” positions in US Treasury 10-year bond futures – betting that bond prices would continue to decline and yields to rise. 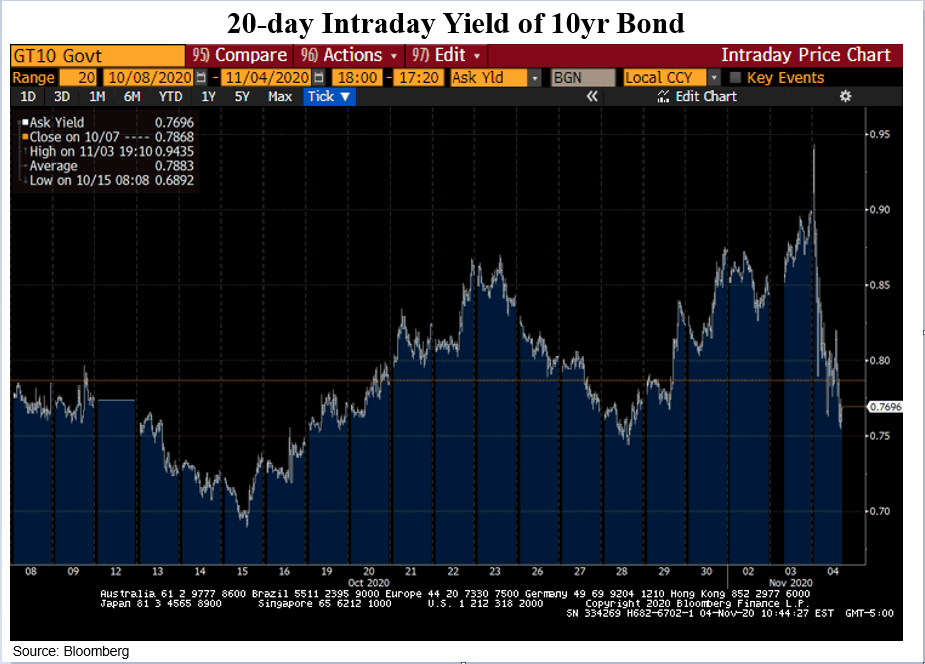 We see yields begin to decline on October 23rd. Why? The second presidential debate sowed doubts in the presidential election results and the blue wave in general. Yields began to decline as the Treasury shorts were removed. This trend lasted until near the end of October, when some of the swing state polling continued to show a lead for former Vice-President Biden. So, yields began to rise again until we hit election week.The drop in yields since the beginning of the week represents what will be a divided Congress regardless of who is President. In other words, spending programs will be harder to come by.

Some quick thoughts – and a lot of crosscurrents – follow.

Municipal bonds aren’t hurt as much as they are not helped. A second stimulus bill that would include additional aid for state and local governments will be harder to come by with the House and Senate in control of different parties.

The higher income taxes that we assume will be coming under either Biden or Trump would come faster under Biden but are less likely with a divided Congress. So a boost in the marginal tax rate, which would help muni bonds at the margin, is probably off the table for now.

On the positive front we have noted how much muni supply is down. Below is the chart of the Bond Buyer visible supply, which is the near-term calendar of municipal bonds plus what is in dealers’ hands. Issuers rushed to market to beat the election, remembering the bond market volatility of four years ago. So, for now, there is VERY LITTLE issuance and a large reinvestment period of December and January looming. 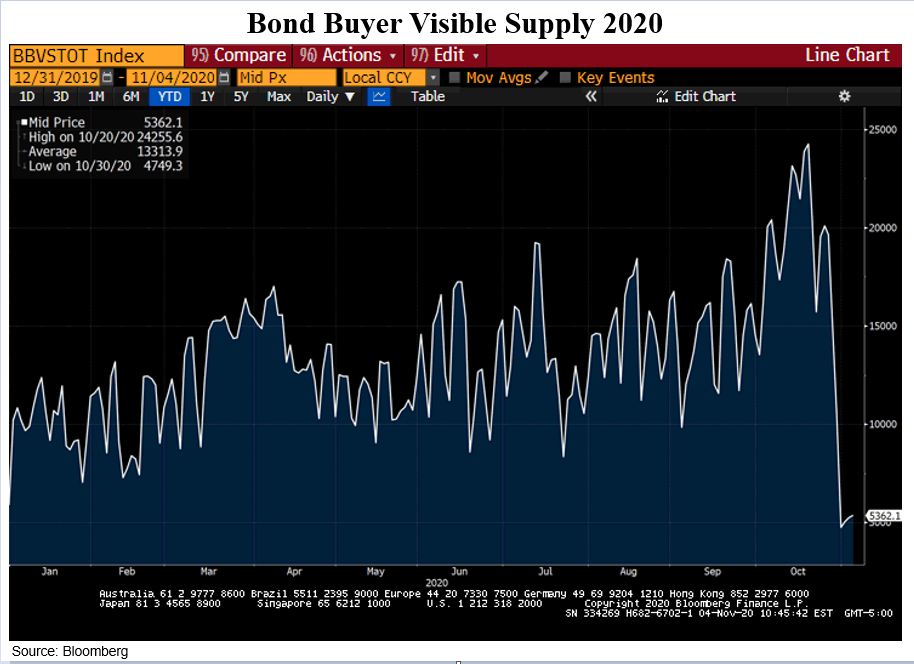 So, as we sit here and wait for some resolution to the elections, a few thoughts:• Interest rates, both intermediate and longer, will be slower to rise; but as the economy improves and we get to a vaccine, we should see higher rates no matter who is finally elected President. Thus caution is needed on durations and maturities.

• Munis should be fine. Though they will probably not get a tax-increase boost right away, from a demand/supply standpoint they are in very good shape.

• Muni credit will continue to be important and is anything but static. Without a second stimulus bill, we may see some additional actions from the Federal Reserve to shore up markets if needed. We also expect further jawboning from the Fed to Congress on the importance of additional stimulus.

We will keep readers up to speed.