On Thursday, March 12, the Federal Reserve announced additional measures designed to send a message to markets that the Fed is there should it be needed. Pundits hyped that the Fed was going to inject up to $1.5 trillion of liquidity into financial markets, but that amount is misleading in many important ways.

First, the Fed has been adding to its balance sheet at the rate of $60 billion a month, mainly in T-bills, and had planned to continue through at least the second quarter of 2020. On March 12, this policy was modified to include purchases across the term structure (see: https://www.newyorkfed.org/markets/opolicy/ operating_policy_200312a).

Second, more significant than the change in the maturity structure of its purchases, however, was the announcement of the intention to offer a series of potentially large repo transactions, which the press reported would expand the Fed’s balance sheet by as much as $1.5 trillion (see: https://www.cnn.com/2020/03/12/investing/ny-fed-trillion-coronavirus/index.html or https://www.nbcnews.com/business/economy/why-did-federal-reserve-inject-half-trillion-dollars-financial-system-n1157166). Some interpreted the action as another QE but in some cases totally misstated what the Fed was proposing and missed the central point that the proposal was actually a series of short-term collateralized loans.

While the press reported that the Fed intended to inject up to $1.5 trillion of liquidity through its repo operations,  no such limit is contained in either the monthly transactions schedule, referenced above, nor in the announcement accompanying the change. Indeed, up to 8 more potential $500 billion offerings are contained in the above-referenced schedule. It is hard to believe that that much would be injected, especially as the recent takedowns shown in the chart below provide evidence as to how much markets are stressed for liquidity.  But it does send the clear message that the Fed is willing to do whatever it takes.

Interestingly, all of the overnight and under-25-day repos offered between March 3 and March 13 were oversubscribed, as indicated by the tan bars above the total line in the chart below; but the first three installments  installment of the  two 84-day and one 31-day $500 billion offerings amounted to only $119.4 billion and thus were  undersubscribed by more than $1.380 trillion(shown with the bars below the zero line), suggesting either that right now pressures are not anticipated to be great or that there are simply not many eligible securities needing to be financed. To put those numbers in perspective, the maximum amount outstanding last September and early October was about $281 billion. Given the fact that the Fed has proposed at least eleven such $500 billion offerings from March 12 through early April, we might have supposed that the Fed would have put out a more general announcement from both the Board of Governors and the New York Fed, rather than a communication to only those active in the repo market. 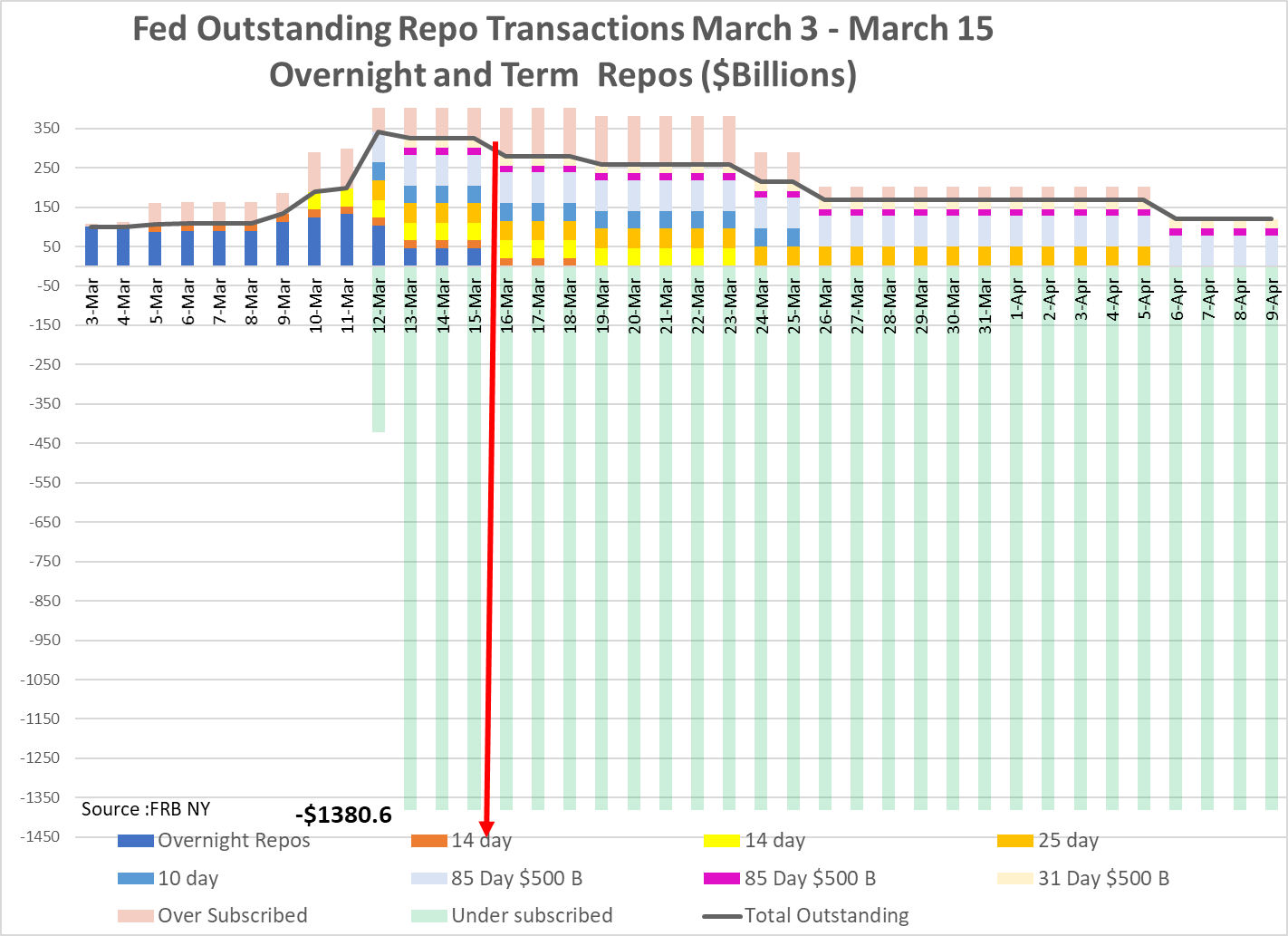 If last Thursday and Friday’s actions weren’t enough, on Sunday the FOMC in a series of actions made the unprecedented decision during a weekend-emergency meeting to slash its target rate for the federal funds to 0-.25%. The Board of Governors also slashed the discount rate by 150 basis points to .25 percent effective March 16 thereby narrowing the spread between the federal funds rate and discount rate to the top of the new federal funds target range. If that weren’t enough, the Federal Reserve also announced that it would restart its QE bond buying program. It will begin the purchase of $500 billion of Treasury bonds across the curve beginning March 16 and it will also buy $200 billion of mortgage backed securities as a means to support the housing market. As part of this new QE the Fed will resume reinvestment of both maturing Treasury securities and mortgaged backed securities. At the same time, the Board of Governors put out a statement that not only encouraged banks to rely upon intraday credit to support a smooth functioning payments system but also urged large bank holding companies to dip into their liquidity buffers as needed to support lending and the economy. Lastly, as part of a coordinated effort, the world’s major central banks (Canada, Bank of England, Band of Japan, the Swiss National Bank and Federal Reserve) announced they will expand the volume and lower the cost of standing US dollar standing swap lines by 25 basis points. Additionally, these banks will expand their current one-week maturity US dollar liquidity offerings to also offer an 84-day transaction as well.

We now have the makings of both a wave of fiscal policies to mitigate the costs of the coronavirus pandemic to the US economy, if the Senate enacts legislation that has already passed the House with presidential support, and complimentary monetary policy. This is not only “whatever it takes squared” but also all the chips are now on the table.