The first quarter of 2018 was a wobbly one for municipal bonds. Supply, as we know, was taken from this quarter and moved up to December of 2017 in order to beat the tax bill. Most of this “moved up” issuance was in the form of advance refunding issues (which were not allowed under the new tax law) and private activity bonds (which ended up being allowed). The result was a December with over $65 billion of issuance – a record. It did not hurt markets, as retail and institutional investors snapped up supply, aware that there would be a dearth of offerings come January.

Both Treasury scales and tax-free scales moved higher during the quarter:

The rise in yields earlier this year was due in part to the bond market’s catching up to offer competing yields with stock markets, and munis did move up smartly in January. Of the 30-basis-point rise in long yields, half happened in January and the other half in the six weeks since February 1. So the upward movement of yields has slowed down.

We continue to emphasize a “barbell” approach on the muni side because of its relatively steeper yield curve.

The muni yield curve has almost always been steeper than the Treasury yield curve. Often it is a function of the different segments of buyers in the muni universe, with banks and insurance companies being segmented in the “belly” of the yield curve and bond funds and individual accounts being traditionally longer-term buyers. We think the longer end has offered an extra yield premium because of the volatility associated with bond funds in the longer end of the market – think the taper tantrum of 2013 and the Trump sell-off in late 2016 as the latest iterations of this volatility. We remain hopeful that muni bonds will be included in the new definition of high-quality liquid assets. (See last week’s commentary: “A Short Note on Bank Muni Holdings” – https://www.cumber.com/a-short-note-on-bank-muni-holdings/). Assuming Congress passes this measure, the development should spur on municipal bond demand in the belly of the curve and potentially longer.

Many bonds in the A and AA categories are trading at yields substantially higher than the corresponding US Treasuries. We believe this cheapness eventually evaporates as short-term yields move higher and the economy continues to return to “normal” – in other words to an economic environment akin to the one we experienced before the financial crisis: a Fed that is raising short-term interest rates because the economy is growing, employment expanding, and companies prospering. In the 2004–2006 period when the Fed raised short-term interest rates, long-muni/Treasury yield ratios declined from over 100% to approximately 85%. We believe this should happen again, partly because only about 75-80% of the rise in a Treasury yield is needed to approximate the same rise in the taxable equivalent yield of a municipal bond, and partly because the drop in supply should eventually work into lower ratios on a long-term basis.

The forward calendar visible supply has moved higher in March, as depicted below. 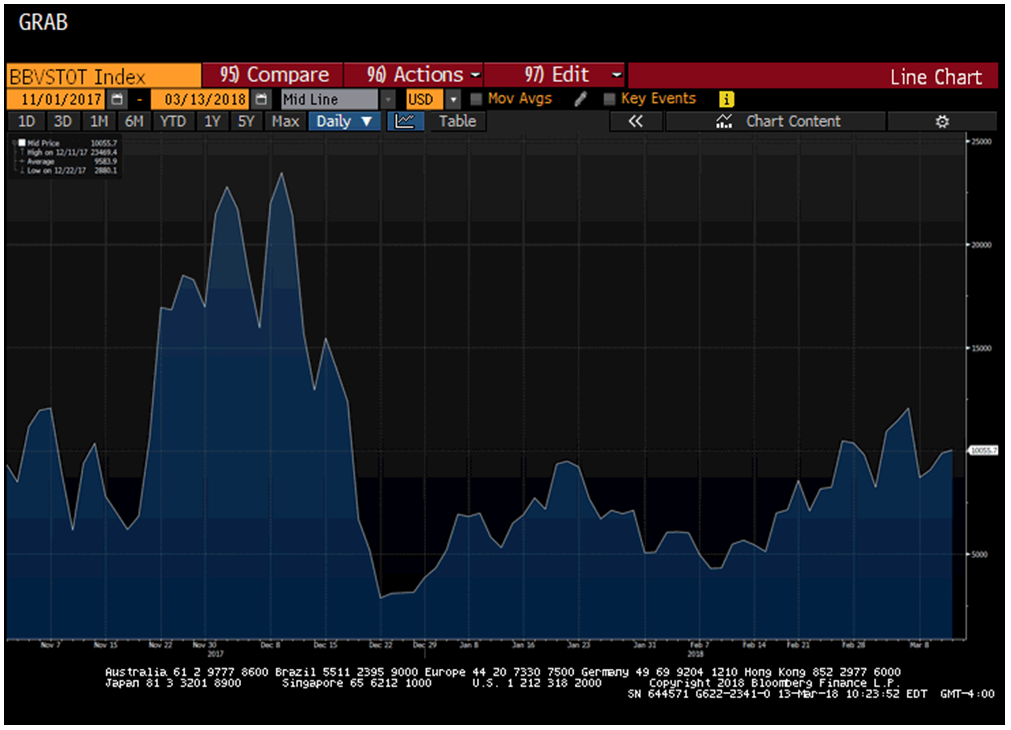 So far 2018 has been marked by a supply drop, with total municipal bond issuance down through the first two months of the year from $59.4 billion in January-February 2017 to $36.5 billion this year. This reduction in supply did not keep prices from being volatile in January. The lack of supply ($17 billion in January 2018 – down from $36 billion last year) meant that most prices (as marked) on municipal bonds were essentially moved down because of the rise in Treasury yields during January. The ten-year Treasury rose from 2.41 to 2.70 during January, and the lack of municipal issuance meant that evaluators used the change in Treasury prices to change muni prices and clearly overreacted. Since that time we have seen municipals perform better as supply has picked up and evaluators have had a sufficient amount of municipal bond trades to be able to base muni pricing on movements in municipal bonds, not Treasury bonds.