Mr. David Malpass, at the US Treasury, will meet with Chinese Commerce Minister Wang Shouwen in late August. This is excellent news.

Dennis Gartman beat me to this on Thursday morning. I’m in complete agreement with Dennis’ assessment:

“Mr. Malpass, as everyone should remember, is an old Wall Street ‘hand,’ for he was at one time Bear Stearn’s Chief Economist. He served in the Reagan and Bush administrations in various positions of economic authority and has been a close economic advisor to President Trump before being given the position of Under Secretary of the Treasury for International Affairs. His are capable hands.”

Over the years I’ve spoken with David Malpass from time to time. He is and was always gracious. And his skill set is deep. He was a very early economist addition to candidate Trump’s team. He has made thoughtful policy arguments while carefully avoiding the political infighting.

While I personally do not agree with Peter Navarro’s broad tariff approach and believe it has done a disservice to POTUS and to the US, I have to confess some relief and new encouragement at seeing David Malpass now prominently added to the Kudlow and Lighthizer negotiating team which is now led by Treasury Secretary Mnuchin. The outlook is starting to offer hope for a positive turn in the US versus China trade war.

Why did I list the US first and not alphabetically in the previous sentence? Because we started the war, that’s why. We followed the Navarro script and now we have a mess which the new team must straighten out.

Below is a list of the top 20 countries ranked by GDP. Look at it and count all those involved in protectionism and tariffs that have been expanded or enlarged in 2018. Count the USA first, since we are now involved in tariffs and retaliatory tariffs with most of the globe (if we measure by GDP). Yes, some tariffs and trade barriers have been around for years. But, on the whole, the WTO had accomplished a global reduction. Until 2018.

Here is the chart, courtesy of Brent Donnelly of HSBC. 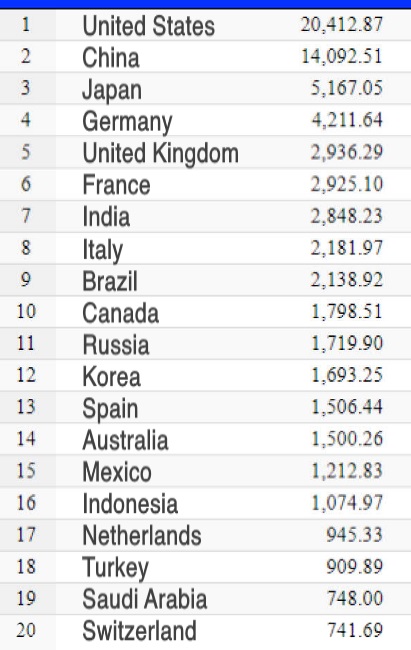 Is the tariff war peaking? We don’t know. Is it starting to show up in anecdotal inflationary evidence? Yes. Is it slowing growth? Yes. Is it exacerbating credit risk? Maybe.

The important thing to know is that the Mnuchin-led team has the skills to see and understand the dangerous effects of growing protectionism, and we may begin to see damage control and a shift away from the harmful direction in which we’ve been headed.

Time will tell, as preparations and negotiations leading to a Trump-Xi November summit unfold.

Let’s move to an insightful post by Xi Sun, entitled “Will US-China trade war reshape global value chains?” We thank Lyric Hughes Hale for making it available via her EconVue site. Lyric is a longtime friend who has contributed economic and political affairs commentary to a broad range of publications and who, with her late husband, David Hale, coauthored the book What’s Next? Unconventional Wisdom on the Future of the World Economy, as well as the influential article “China Takes Off,” published in Foreign Affairs in 2003. She is a member of the Council on Foreign Relations and has served on numerous boards.

Here’s the link to her site: https://www.econvue.com/pulse/will-us-china-trade-war-reshape-global-value-chains.

Tariffs beget tariff exemption applications; and as the following article in the National Review states, “Their proliferation has empowered government bureaucrats ill-suited to the task to pick industry winners and losers.” https://www.nationalreview.com/2018/08/tariffs-bad-government-exemptions-worse/

The backlog of exemption applications has grown to over 20,000, and the swelling Dept. of Commerce bureaucracy must review and decide each one – but without the industry expertise necessary to balance the arguments being made (though they have plenty of input from Washington lawyers and lobbyists). What generally happens is that the players with the deepest pockets and most political clout prevail. The Wall Street Journal has remarked, “Far from draining the swamp, tariffs feed the swamp.”

Thus, the Navarro policy recommendations to POTUS have created an entire new, costly, and nonproductive government intervention into Americans’ businesses and lives. We can only hope the Mnuchin-led Kudlow, Malpass, & Lighthizer team can control and reverse this damage. We will close with a link to another instructive chart on the present and future global economy. Hat tip, Steve Blumenthal. Think about this trajectory and please consider how and where protectionism fits in. Or where it doesn’t. https://twitter.com/sblumenthalcmg/status/1031121108865622017