Taxing Wealth Instead of Income, Part 2

As a follow-up to David Kotok’s piece last week on taxing wealth (https://www.cumber.com/cumberland-advisors-market-commentary-wealth-tax/), it may be useful to remind readers what the potential incentive effects might be when it comes to the implications of wealth tax proposals to tax wealth may have on entrepreneurs and business structures. Proponents of a wealth tax are motivated by the need to finance what is now a growing federal deficit as well as to address what is perceived to be a problem with growing wealth inequality in today’s economy.

Two of the proposals that are more easy to understand and calibrate are those put forward by Senators Bernie Sanders (https://berniesanders.com/issues/tax-extreme-wealth/) and Elizabeth Warren (https://elizabethwarren.com/plans/ultra-millionaire-tax). The Sanders proposal contains a progressive tax with a maximum of 8% on net worth over $10 billion, declining gradually to 2% for families with net worth between $50 and $250 million. The Warren proposal is less progressive, with a 2% tax for households with net worth between $50 million and $1 billion and a 3% tax on net worth above $1 billion. While the plans seem quite different, we can plot what might happen over time to the net worth of households that started with $10 billion of net worth. The chart below shows the path for net worth under both plans over the most relevant range.[1] 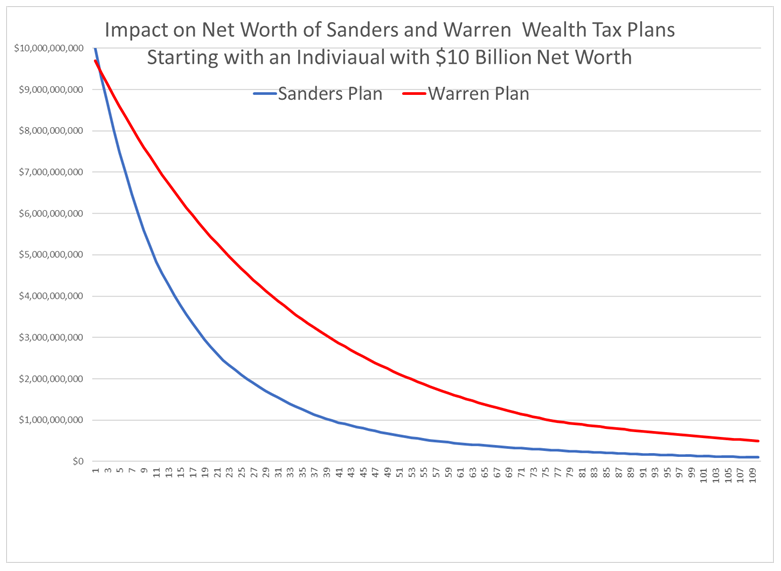 The Sanders’ plan would halve net worth in about 11 years while the Warren plan would halve net worth in about 23 years. It is important to recognize that these are maximum-impact cases, since the analysis ignores any investment returns or other sources of growth in the value of wealth. If the household could earn at least enough on its asset holdings to more than cover the cost of the tax, for example, then effectively the net-worth tax proposals would amount to capping net worth at whatever the current levels were. In the Sanders proposal, for example, an individual with at least $10 billion in net worth would have to earn a bit more than the marginal 8% tax rate. In Warren’s proposal, the household would only have to earn a bit more than 3%.[2] So while the proposed net-worth taxes would generate revenue to support the government, they would do little to address concerns that many have about wealth inequality which would have to depend solely on increasing the wealth of those not subject to the taxes.

Implementation of such programs could, however, have significant implications for how people manage their wealth. In a previous commentary, I noted how the composition of wealth varies over different classes of net worth. The most recent data available are from the Federal Reserve’s 2016 survey of consumer finances, shown in the following chart. 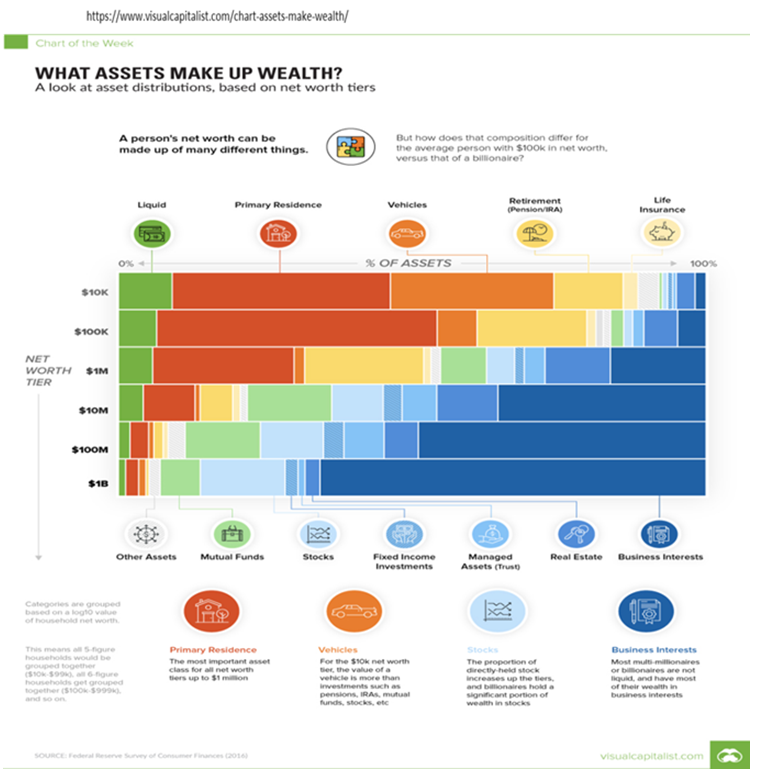 For those with net worth over $1 billion, which is really the target group for the wealth-tax proposals, I noted that “more than two thirds of the wealth of the $1-billion-dollar-net-worth cohort is composed of what are termed ‘business interests.’ The Survey of Consumer Finances divides business interests into those businesses in which the owner has an active management role and those in which the owner does not play an active role, and well over 90% of such business interests involve active management. Thus, those who wish to tax wealth rather than yearly income are, in fact, targeting mainly privately held businesses whose value is derived from the active entrepreneurial involvement of the principal and his or her family.[3] Such assets are hard to identify, since they can include loan guarantees, intellectual property, etc. Those business interests are not frequently traded and are extremely hard to value. These are the same business interests that generate employment and benefits to many others.”[4] But capping net worth effectively caps the value of household business interests, and this cap has implications for how such businesses can grow and increase their capital as well as their risk taking incentives. If the effect is to stifle growth and employment, then the unintended consequences might well be detrimental to the economy going forward. If the effect to promote excessive risk taking, then the stability of the economy may be at risk.

In Sanders’ case, it is estimated that the proposal would impact about 180,000 households, and the IRS would be tasked with the job of valuing the net worth of those households each year. This would seem to be a very difficult and costly bureaucratic process to undertake, and one can imagine the disputes over values that would accompany implementation of the wealth tax. In short, proponents of a wealth tax need to delve a bit deeper into the likely first- and second-round implications of their proposals, which may not be quite as simple as they are represented.

[1] One can easily calculate from this chart how many years it would take to reduce net worth by one half, from, say, $4 billion to $2 billion, under either plan.
[2] Of course, as the marginal net-worth tax rate declined, the earnings requirement would be reduced.
[3] See for example “Changes in U.S. Family Finances from 2004 to 2007: Evidence from the Survey of Consumer Finances,” Brian K. Bucks, Arthur B. Kennickell, Traci L. Mach, and Kevin B. Moore, revised 2009, Federal Reserve Bulletin, Vol. 95, 2009, https://www.federalreserve.gov/pubs/bulletin/2009/articles/scf/default.htm.
[4] See Eisenbeis, https://www.cumber.com/taxing-wealth-instead-of-income/.

Here are links to our recent writings on the subject of Wealth Taxation.