To no one’s surprise, the FOMC left its policy rate unchanged. This decision was widely telegraphed in advance. What was a surprise to many – but should not have been – was the mark-down in prospective rate changes to zero in 2019 and only one in 2020.

Pundits puzzled over what had changed since the much more hawkish policy rate projections in December. But what is overlooked is the fact that the “incoming data” that were available in March were much less encouraging than the December data. In December the FOMC had only Q1 and Q2 GDP, and Q2 GDP was over 4%, a very strong number. But by the FOMC’s March meeting the Committee saw that we had experienced three consecutive quarters of declining GDP in 2018, and preliminary data for Q1 2019 suggested a continuation of that trend. In his press conference Chairman Powell specifically noted slowdowns in consumer spending and investment this year as additional indicators of slowing growth. This pattern of incoming data, combined with a healthy labor market and no signs of accelerating inflation away from 1.9–2%, combined with a mark-down of 2019 growth to 2.1%, provided the rationale for the Committee’s being patient with an economy that is largely in equilibrium, growing at its potential.

What was really new from this meeting was the very specific information provided on the normalization of the Fed’s balance sheet. The Committee modified the monthly goal for shrinkage of its Treasury portfolio from $30 billion per month to $15 billion beginning in May 2019 and stated that it would stop the shrinkage of its asset holdings by the end of September. Furthermore, beginning in October, principal payments from its agency debt and MBS will be reinvested in Treasury securities, with any excess over $20 billion to be reinvested in MBS. The Committee will hold its balance sheet at this size for a period of time and noted that as demand for currency and non-reserve liabilities (reverse repos, Treasury and foreign holdings) grows, the volume of excess reserves will shrink. So what does this course imply in the short run about the terminal size of the balance sheet, and will the plan laid out actually enable the Committee to achieve its objectives? On the size question, Chairman Powell stated at the press conference that the aim is to have the balance sheet at $3.5 trillion. As for the workability of the plan, the answer will depend upon the maturity structure of the Fed’s assets and principal payments from its MBS portfolio. 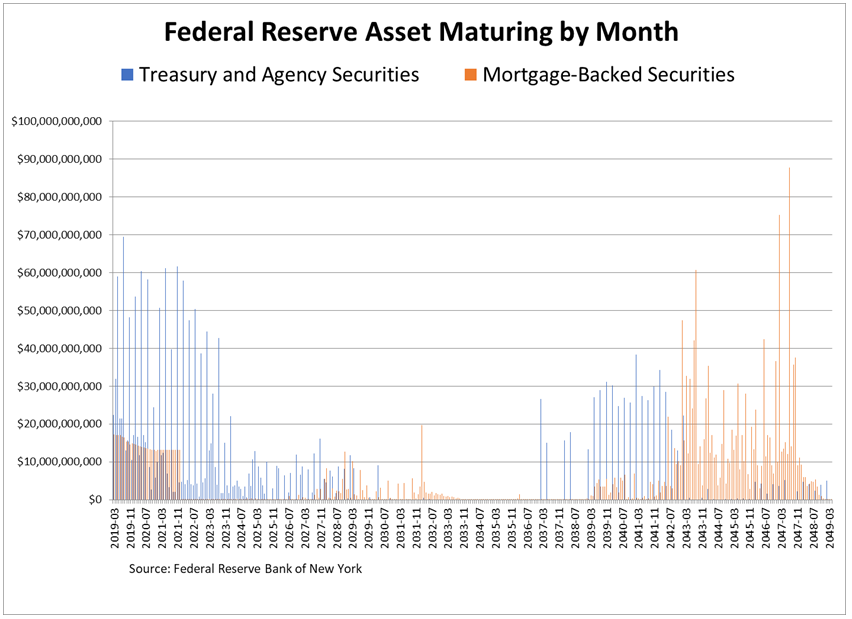 This gap means that the maturity structure of the reinvested funds into Treasuries will most likely be concentrated in the under-10-year portion of the term structure so as to even the flow of maturing assets and reinvestments. Also, in the short run – at least for the remainder of this year – it is possible to gauge whether the plan is achievable. As of March 20, 2019, the Fed’s balance sheet was $4.0 trillion, of which $3.8 trillion was securities held outright.[1] While Chairman Powell stated a balance sheet objective of $3.5 trillion, it is a bit unclear whether that number refers to the total size of the balance sheet or simply to the securities holdings. The newly revised statement on “Balance Sheet Normalization Principles and Plans” discusses only the size of the SOMA portfolio and not the total size of the balance sheet. Assuming that the $3.5 trillion objective is for the SOMA portfolio, can the projected runoff be achieved without asset sales? We can estimate the impact that the monthly reduction in Treasury securities from $30 billion to $15 billion will have through September, since we have published data on maturities from the Fed. From March through September the projected reductions in Treasuries total about $127.4 billion. Estimating the principal payments and maturing MBS is more difficult, since Fed data on MBS holdings show only face amounts and do not reflect principal repayments. However, the annual reports of the SOMA account do project what principal repayments will likely be. The most recent projections are in the 2017 annual report.[2] Those projections total about $116.7 billion. With total securities holdings in the portfolio at $3.756 trillion as of March 20, 2019, the plan would reduce that amount to $3.512 trillion by the end of September, which is about what Chairman Powell suggested.

So it does appear that even outside the Fed it is possible to assess the proposed plan for the balance sheet. What this analysis does not address in the short run is the amount of excess reserves in the system, above what are really needed to conduct monetary policy effectively. That determination is a work in progress. In the meanwhile, markets have responded by flattening the yield curve even more, and it is likely, barring a shock, that rates will exhibit that pattern for a significant portion of this year.