The “Maine” Event by Jill Fornito

About two hours north of Bangor, Maine, and 20 miles south of the Canadian boarder is the teeny tiny town of Grand Lake Stream, where every summer, longtime GIC Board Member David Kotok hosts his annual fishing retreat. Affectionately named “Camp Kotok,” this exclusive event brings together a mix of economists, analysts and strategists for four days of recreation in the cellular signal-free setting at Leen’s Lodge. Given that so many of the Camp Kotok attendees have served as GIC speakers, board members and sponsors, this could easily be described as a GIC conference disguised as a fishing trip. I was fortunate enough to have been invited to participate for a second year in a row.

Grand Lake Stream is remote, and Leen’s Lodge is isolated. You have two options in 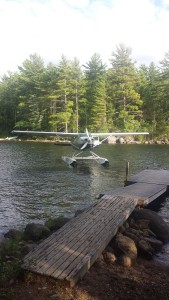 getting there: the easy and scenic drive from Bangor International Airport or the 30 minute float plane ride from Bangor to Leen’s private dock. Last year, I rented a car and took the drive, stopping first for lunch just outside of Bangor in Brewer at the charming Eagle’s Nest, a little hidden gem that sits on the Penobscot River serving up big beautiful lobster rolls to the lucky few who know of its existence. Continuing on, after an 85 mile stretch (complete with requisite roadside ice cream stand) and after the Passamaquoddy Indian Reservation, you’re almost there. The sign for Leen’s Lodge directs you two miles down a dirt road, the official demarcation sign of having arrived in God’s Country. This year, I chose the float plane, which operates 25 minutes from BGR by Katahdin Air. Soaring only 3,000 feet above the wilderness in a four-person sea-aircraft, I asked our pilot and the owner of the business, Jim Strang, how long he’d been flying. “Oh, since about 6 o’clock this morning,” he quipped. To the East, in the distance we can see as far as Cadillac Mountain in Acadia National Park and below we spot a single moose trekking along the tree line. After landing smoothly on the surface of the majestic West Grand Lake, moments later we arrived at Leen’s private dock, just steps away from the dining lodge. 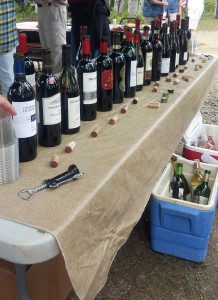 Family-run since 1958 and owned by the warm-hearted outdoorsman Charles Driza since 2001, Leen’s offers a variety of cabins ranging from one to eight bedrooms, many of which have fireplaces and decks overlooking the lake. Our group of 65 convenes in the dining lodge for breakfast and dinner and it’s the only spot within miles that you’ll connect to WiFi. Breakfast is served from 7 a.m., where the bright-eyed dining staff members are eager to get your order, feed you and pair you up with your fishing partner and to your guide, who’s ready to take you out onto the lake. Lunch is prepared lakeside which often features the perch, bass and pickerel that was just caught that morning (by you). Dinnertime menus rotate nightly including local game and the standard, Maine lobster, always followed by a fresh baked dessert while the sun sets stunningly off the deck. After which, you may find yourself in a poker game, in a sing-a-long with Randy Spencer (author/musician and fulltime fishing guide) and his band, or knee-deep in a lively debate that has a good chance of rolling well into the night. All activities pair nicely with a glass of fine wine, all of which is shipped in advance by the participants. 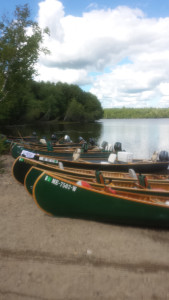 My fishing guide both years has been local resident, Brett Vose. Brett, 25, has been guiding since 2008 and was the second youngest guide ever to earn the Grand Lake Stream hunting and fishing guides’ license. Brett sits on the board of the Grand Lake Stream Guide Association and earns a living by guiding his fishing excursions from his beautiful hunter green 20’ Grand Lake Canoe that he built by hand with his grandfather (complete with built-in cup holders!). In the winter, he guides bear hunts. These professional guides are dedicated to providing a safe and enjoyable outdoor experience for their clients. Brett shared with me a glimpse of what life is like in his town, where the population is bordering on 100 residents and the closest supermarket an hour away. He attests to the town’s seclusion, joking that the only spot to get a cell phone signal is a mile from his home and that the nearest Wendy’s is back in Bangor. One of Brett’s fondest memories was having guided for a client who worked as a rocket scientist on Apollo 11 and who, at 93 years old, plans to return next year. Brett worked patiently as my guide ensuring that I had a memorable experience, one in which I caught my share of fish, enjoyed nature tour in search of “swamp donkeys” (moose) and even caught an afternoon snooze in the warmth of the sun as we skimmed the lake back to shore.

The time spent at Leen’s Lodge is a gift. And lucky are those who have been able to receive it. 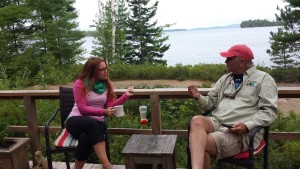