There have been headlines recently describing the drop in state tax revenues versus forecasts for some of the higher-tax states such as California, New York, and New Jersey. Part of the falloff is due to an exodus of higher-income residents from high-tax states, such as the ones above, for states with low or no income taxes, such as Florida, Texas, and Nevada. Exacerbating this effect is the SALT provision of the 2017 tax bill (in effect for the 2018 calendar tax year). It puts a $10,000 cap on the amount of deductible state and local income taxes and local property taxes. This cap, of course, effectively raises the effective rates of these taxes by an amount equal to the loss of deductiblity. Prior to this year, being able to deduct state and local taxes in full meant that taxpayers subject to the old 39.6% highest marginal tax rate effectively wrote off almost 40% of their taxes. The SALT change means that, on a cash-flow basis, both people’s property taxes and income taxes will effectively rise almost 40% from what they paid last year. Here’s an example. Let’s say a New Jersey couple paid $30,000 in property taxes and $30,000 in state income taxes. Under the old method, their $60,000 would be reduced to $36,180 as they would have written the tax off at 39.7%, the old top federal marginal rate. Under the new method, state and local taxes are not deductible, except for the $10,000 limit. Thus, their new taxes are $50,000 ($60,000-$10,000), or 38% more.
For obvious reasons, this new tax bite has generated much consternation and many crosscurrents.

Muni Bond Standpoint
Some of the best-performing bonds in the past two years have been higher-grade issues from New York, California, New Jersey, and Connecticut. We have written on this effect, and we began to emphasize these bonds even in national accounts in the middle of 2017. As the tax bill was being discussed, it became evident that SALT was going to be part of the package. It meant that income from out-of-state bonds for taxpayers in high-tax states would have to overcome a higher yield threshold since more would be taken away by the nondeductibility of state and local taxes on a Federal return.

This past week we looked at yield curves for the high-tax states of California, New York, and New Jersey and then compared them to general market yield curves, which we show below as both nominal yields and then yields after the effects of state taxes on these out-of-state yields are factored in. 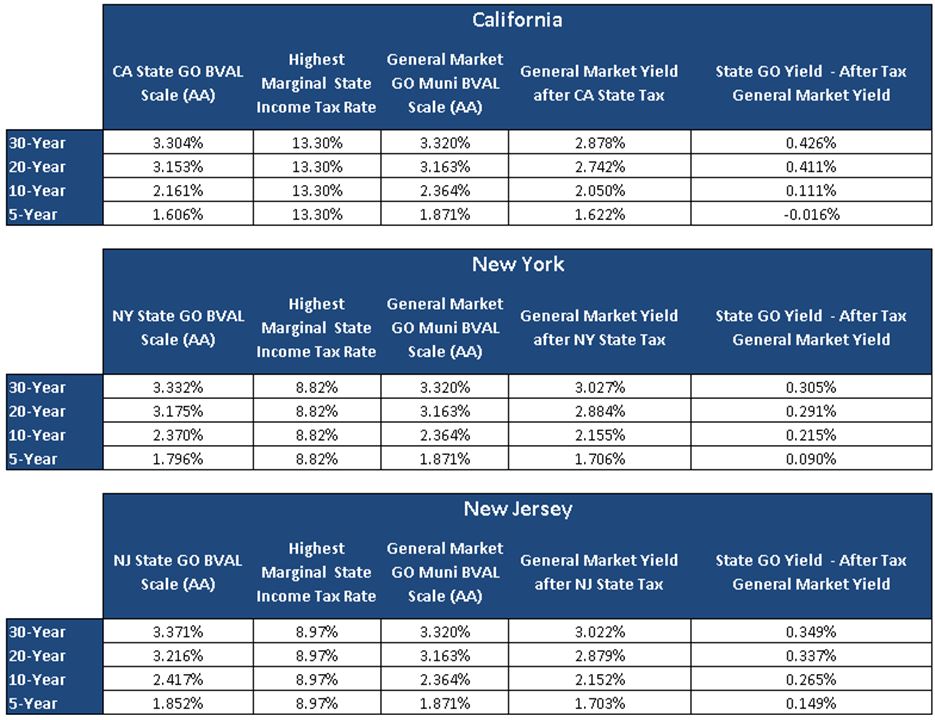 We can see that there is an after-tax give-up at every point on the yield curve in all three states for investors owning out-of-state bonds, with the greatest penalty occurring in California, which makes sense, since it has the highest marginal state tax rate. Clearly this situation has driven higher demand for in-state exempt bonds in all of these states as well as in other states with high state income taxes, such as Minnesota, Connecticut, and Massachusetts. With steeper yield curves in munis, the biggest give-up from a nominal interest rate standpoint is in the longest maturity end.

The most natural message from a chart like this is that investors in high-tax states should reduce the amount of out-of-state bonds in their portfolios relative to their in-state exempt bond holdings.

But it’s not that simple. There are credit issues to consider as well.

The following slides are from a State of New York presentation. 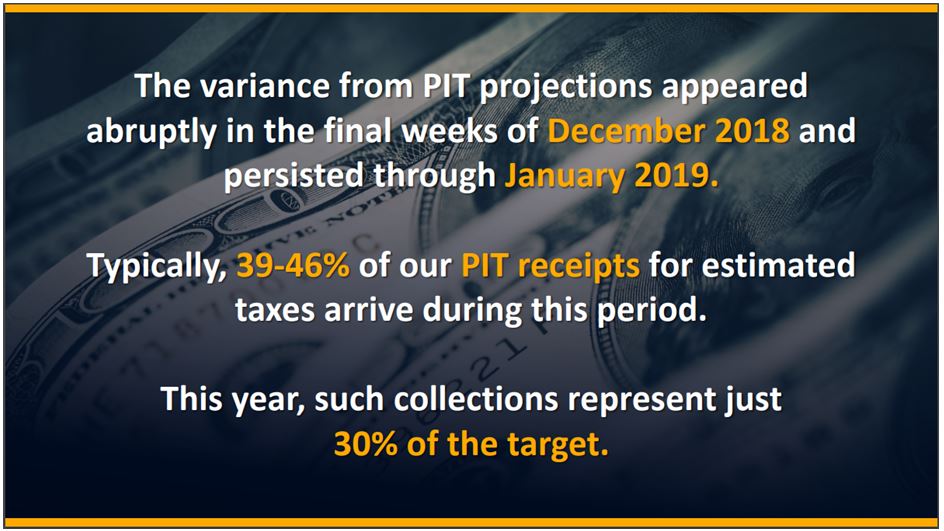 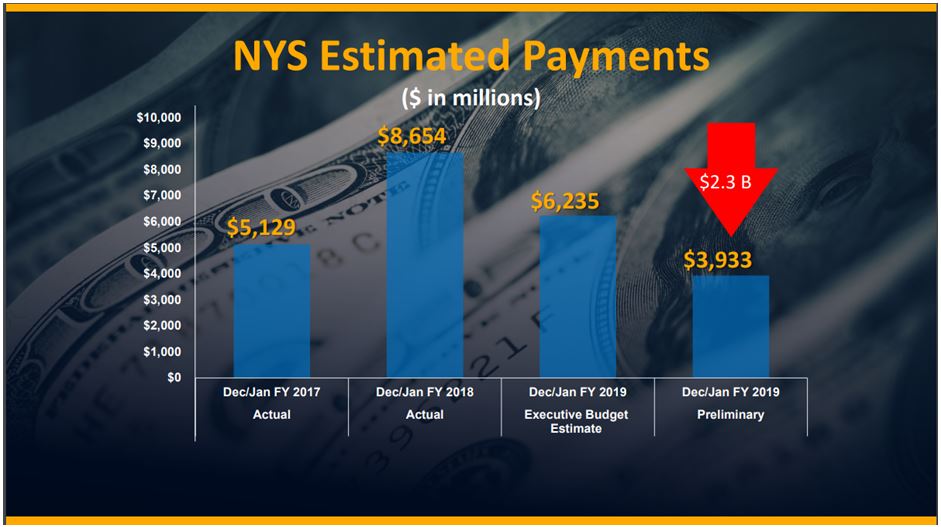 The gist of this presentation is that it bemoans the SALT elimination of deductibility and its impact on New York’s budget. There are presumably similar slides in other high-tax-state presentations. The nondeductibility of both the state income taxes as well local property taxes will have a greater effect on residents of high-tax states. The counterargument of conservatives is that high-tax states have raised taxes based on the deductibility subsidy provided by the federal government. In any case, the high-tax states are now facing the loss of high-tax-paying residents who leave for lower-tax states such as Florida, Texas, and Nevada (no income taxes and lower property taxes). At Cumberland we feel this issue has been holding the high-end housing market in high tax states ransom for the better part of the last twelve months, as the nondeductibility of property taxes hurts that market just as the SALT provisions hurt the higher-yielding out-of-state bonds.

So at this point we have higher demand for IN-STATE bonds. But if these high-tax states continue to lose population, that is a credit NEGATIVE over time. Though it may sound somewhat counterintuitive, we are starting to look at DIVERSIFYING into some out-of-state bonds in the high-tax states as a hedge against potential credit erosion. We have written about the credit issue before. State and local governments will be forced to CUT taxes from their constituents to make up for some of the higher EFFECTIVE income taxes and property taxes. If declining tax revenue is not made up, there is a chance of lower debt-service coverage on bonds.

The best way to employ this strategy in the management of muni bond portfolios is to refer to the chart above. The nondeductibility effect on out-of-state bonds is the least at the shorter end where lower-yielding bonds are. To the extent that we continue to manage bond portfolios on a barbell basis, the marginal addition of out-of-state bonds should come from the shorter maturities.

And finally, President Trump said this week that he would consider some changes to the SALT provision of the tax bill (and just as quickly, Senator Charles Grassley of Iowa, chair of the Senate Finance Committee, rejected the idea on principle).

Whereas the president will find sympathetic legislators on both sides of the aisle from Northeastern states and California, we suspect that the true reason for his step-back is that with residents moving at the margin from the Northeast, reliably Republican states such as Florida and Texas become less reliable. These states are becoming somewhat bluer at the margin as we write this. It is hard to conceive of Republicans winning the White House without Florida and Texas, and we feel that is the main reason for the president to revisit the issue.

*Please note: Cumberland Advisors does not give tax advice. Please consult your tax advisor for applicability of any of the concepts listed in this commentary to your particular situation.