“It aint over till its over” is exactly how Yogi Berra signed this ball when I bought it at a charity auction decades ago. He did put a dot over each lower case i. He didn’t use an apostrophe in ain’t, nor in it’s, and he did use till instead of until. Yogi’s message is just as valid today as it was then. 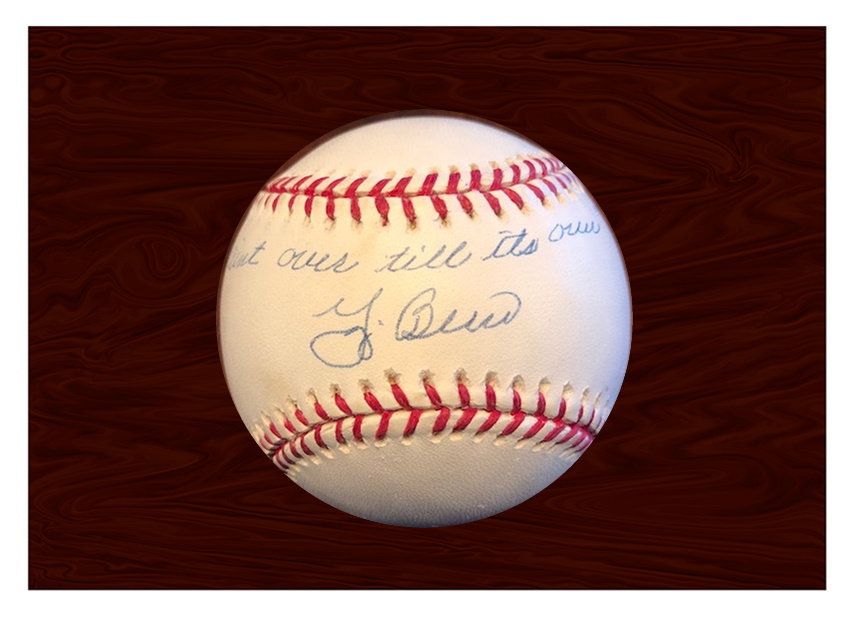 The stock market is moving with events. Those events are far from over. The political data points arrive fast and furiously, in what seems to be a bewildering and often chaotic sequence. Politics are not over.

Bullets follow. This is an incomplete list, as every day brings more. We’ll do the stock market first.

1.   The DataTrek Morning Briefing for October 5 (http://datatrekresearch.com/) reminds us of history:

“Treat those historical tables that show either Republican or Democratic Presidents are better/worse for stock prices with caution. There’s simply not enough data for a robust statistical analysis, and if you just eyeball the dates of changes in power you’ll see they coincide with economic turning points/Fed policy shifts more than politics. It does seem to help if one political party ‘owns’ the economy. Since 1945, when Democrats control Congress and the White House, the mean annual return for the S&P 500 is 14.3%. When the GOP has Congress and the White House, the mean return has been 16.0%. Both are better than the average S&P return of 10.9% since 1945. There is some logic to the idea that a Democratic sweep this November will cause individual asset owners to sell securities in order to avoid a likely increase in capital gains taxes.”

2.   America’s stock markets seem to be discounting a Biden victory and a growing probability of a “blue wave” election where Democrats gain control of the Senate and widen their margin in the House. FiveThirtyEight (https://projects.fivethirtyeight.com/2020-election-forecast/) and PredictIt (https://www.predictit.org) gapped wider after all the revelations about the White House COVID cluster and the superspreader event in the Rose Garden. The story about Trump’s medical treatment and about the New Jersey and Minnesota fundraising events are still incomplete, as is the growing list of infected persons in the White House, the Congress, and elsewhere in the government, including the Pentagon. This story ain’t over.

3.   Here’s a six-minute Wall Street Journal video on the market outlook: “The Stock Market Is Ignoring the Economy. Here’s Why,” https://www.wsj.com/video/the-stock-market-is-ignoring-the-economy-here-why/353A01DC-4548-456B-BC07-CC278FC9EA21.html. It paints a clear, concise picture of where we are.

At Cumberland, we remain nearly fully invested in our nonquantitively-driven strategies. There is some cash reserve allocable to the quant work and small cash reserves unallocated. Vol and Lev Vol are in cash, awaiting an entry. Our US ETF strategy favors the ESG grouping with a heavy overweight. Also overweight are biotech and healthcare. For updates, we recommend that readers take time to watch each Friday’s Cumberland Advisors Week in Review, https://www.youtube.com/playlist?list=PLu1JZIQ1mPrtx_q7i_C9FWN-cb9f594C1. You will see a crisp discussion of the week’s stock market and bond market. In Sarasota you can also see a summary version of this on Friday nights on SNN-TV. Bottom line – stocks are in an uptrend and likely to work their way higher over the next months and years, but volatility remains high and will carry into the post-election period.

Here are some political bullets we are watching:

1.   Biden’s poll surge notwithstanding, the outlook for elections is still uncertain. Here’s an example. Texas governor Greg Abbott has restricted drop boxes for absentee ballots to one per county (“Texas governor shuts down drop-off sites for early mail votes,” https://www.reuters.com/article/us-usa-election-texas/texas-governor-shuts-down-drop-off-sites-for-early-mail-votes-idUSKBN26M7BX). A court battle ensued over Abbot’s October 1 order, which, though blocked by a federal judge on Friday, October 9, was formally upheld on Monday, October 12, by a panel of three federal judges, all of them appointed by President Trump to the Fifth Circuit Court of Appeals (“Texas counties can offer only one drop-off ballot location, federal appeals court rules, upholding Gov. Greg Abbott’s order,” https://www.texastribune.org/2020/10/13/texas-election-ballot-drop-off/).

Now what? What does that mean? As Yogi said: “It ain’t over.”

2.   The election outcome here in Florida remains uncertain but is now leaning for Biden. Some Republicans are openly abandoning Trump. Here’s a YouTube of the former president of the second largest Republican Club chapter in Florida. That happens to be the Sarasota chapter: “Why This Longtime Republican Rejects Trump,” https://www.youtube.com/watch?feature=emb_logo&v=-wqA-pbN7sQ.

3.   We’re watching down-ballot congressional races for clues, and some are very close. In Florida’s 16th Congressional District (my home district), Margaret Good’s campaign against incumbent Vern Buchanan has become, at the time of this writing, a pollster’s “too close to call.” See https://projects.fivethirtyeight.com/polls/house/florida/16/ for the latest in the evolving race. Buchanan (https://buchanan.house.gov) is on the House Committee on Ways and Means and now has to defend his votes that have aligned with Trump, while Good (https://margaretgood.com/) has a clear pro-environmental policy stance and is a veteran legislator. This outcome is critical. Can a down-ballot contest provide coattails to a presidential election? That would be unusual but possible in this extraordinary year.

4.   In the October 13 edition of AM/FX, titled “BW-B-M-FL,” Brent Donnelly of HSBC included a Florida election factoid from Steve Schale:

“‘If you take all the people who have voted in Presidential elections since 1992, Florida has seen north of 51 million ballots cast, and the difference between the total number of Republican ballots and total number of Democratic ballots is less than 20,000 votes. Yes, you read that right’ (“Everything You Wanted To Know About Florida, But Were Afraid To Ask – The 2020 Version,” http://steveschale.squarespace.com/blog/2020/9/14/everything-you-wanted-to-know-about-florida-but-were-afraid.html). Schale’s blog goes deep in the weeds, but if you are interested in Florida election minutiae, it’s the place to go. Here is the latest one: http://steveschale.squarespace.com/blog/2020/10/12/florida-22-days-out-why-am-i-still-doing-this-to-myself.html.”

Readers can continue to follow these political developments in Florida and beyond for themselves. All the swing states are lurching through dramatically changing outlooks. But more October surprises may still lie ahead. This ain’t over.

Last on our list are COVID-19 and vaccine, treatment, mitigation issues, as daily case surges and hospitalizations and deaths continue to make headlines. Meanwhile mitigation with masks and distancing remains controversial. In Florida, Governor DeSantis has overruled the City of Sarasota’s ordinance imposing fines on those who do not wear face masks indoors in public places; and though the city has not shelved the ordinance altogether, the city’s bars are again crowded with people who are mostly unmasked. As Forrest Gump said, “Stupid is as stupid does.”

Finally, here’s Sam Fazoli, in the October 13 edition of Bloomberg Prognosis, with a last, wise word on vaccines:

“Like everyone else on the planet, I want to get back to normal as soon as possible, and a vaccine will help get us there. But I only want a vaccine that has been through all the rigors of a full-sized trial. A little patience would help deliver much more information and give other vaccine hopefuls a chance to prove their worth as well. We would all be better off for it.”

As Yogi scrawled on my prized baseball: “It aint over till its over”.