With the summer mosquito season underway, Zika wings its way back into the news.

For the children of Zika and their parents, Zika’s impact will never abate. Journalist Mauricio Savarese reports for the AP from Brazil: “Today, some of the children born during the outbreak are trying school for the first time — in very limited capacities — while others have died or are struggling to survive, hindered by health and developmental problems.” He details some of their stories. Joaquim, who has microcephaly, can scribble with a pencil but cannot speak. He is fed through a tube, and his mother has to attend school with him to meet his nursing needs. In Brazil and elsewhere, including here in the US, schools face a steep learning curve as they begin to serve the special needs children whose lives have been forever altered by Zika. (http://www.santafenewmexican.com/news/some-of-brazil-s-zika-kids-try-school/article_14efc3b3-4afe-5fc4-b9e8-b3e2ca00de2c.html)

New research on nonhuman primates indicates that fully 26% of monkeys exposed to Zika early in their pregnancies miscarried. The findings suggest that human pregnancy losses resulting from Zika may in fact be higher than the data suggests. After all, Zika infections in adults may produce only mild symptoms or no symptoms at all and go undetected. (https://www.nih.gov/news-events/news-releases/pregnancy-loss-occurs-26-percent-zika-infected-monkeys)

But there is good news, too, on the Zika front. The number of Zika cases has fallen off dramatically in the past year. In areas hardest hit by Zika early on, the drop-off in cases seems to indicate that affected populations are developing “herd immunity.” A recent piece from PBS News Hour summarizes the numbers:

“Last summer, the virus declined sharply in its hotspots and all but disappeared in the U.S. In 2016, Puerto Rico, the U.S. Virgin Islands and American Samoa saw more than 36,000 cases of locally transmitted Zika virus. By 2017, the number had dropped to 665. In 2017, the continental U.S. saw only seven cases of local mosquito-borne Zika, down from 224 the previous year” (https://www.pbs.org/newshour/science/what-happened-to-zika).

The CDC’s pregnancy outcomes page reports totals that have grown more slowly in the past year, though there is always a lag time before updated numbers appear. Totals listed below are for December 1, 2015, to March 31, 2018. 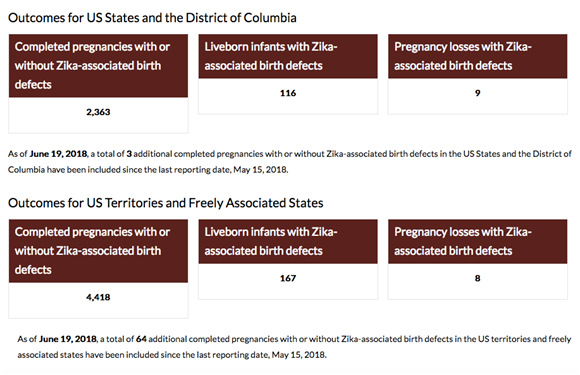 At this point, there are no reports of local Zika transmission in the continental US, though surveillance will continue to be key because travel-related cases crop up now and then – most recently, in Williamson County, Texas (https://www.kvue.com/article/news/local/two-zika-cases-confirmed-in-williamson-county-how-to-avoid-the-virus/269-571672784). Any travel-related case can, of course, lead to local transmission if a local mosquito bites the infected traveler and then bites someone else. The CDC maintains its Zika Risk Map for Travelers (https://wwwnc.cdc.gov/travel/page/zika-information), detailing precautions that help reduce the chance of infection.

In the meantime, researchers have gotten a clearer, closer look at the virus itself, indeed the best image we have of any virus. Zika’s structure is intriguing (and rather beautiful), but getting a mugshot of the virus has practical utility. Michael Rossmann, a structural biologist at Purdue University, explains, “With the higher resolution, it is now possible to efficiently design vaccines and engineer anti-viral compounds that inhibit the virus.” (https://cosmosmagazine.com/biology/zooming-in-on-zika). That’s good news indeed.

Work on a Zika vaccine continues, of course (http://www.wfmz.com/health/health-beat/health-beat-vaccine-for-zika-virus/750067921), and other control measures are being explored. A new study finds that flea and tick meds some of us use on our pets (think NexGard and Bravecto) might protect populations from outbreaks of a number of mosquito-borne diseases, including Zika (https://www.sciencedaily.com/releases/2018/07/180702154731.htm). The effects that those drugs have had on some small percentage of pets, however, may raise safety concerns about their use on human beings.

More promising, perhaps, than dosing humans with flea meds is fighting nature with nature. In Australia, scientists have successfully deployed a bacteria called Wolbachia to dramatically reduce Aedes aegypti mosquito populations. CSIRO research director Paul De Barro explains, “What we were doing is releasing only males that had this wolbachia, and they would cross with mosquitoes in the field, the wild mosquitoes that didn’t have that same strain of wolbachia; and as a result the wild females would only lay sterile eggs, and so the population would crash.” Mosquito populations were reduced by 80% during the course of the experiment, sharply reducing risks of chikungunya, yellow fever, and, of course, Zika, all diseases carried by the Aedes aegypti mosquito. (http://www.abc.net.au/news/2018-07-10/zika-and-dengue-spreading-mosquito-largely-wiped-out-in-trial/9962294)

The good news about falling case counts aside, Zika still poses a threat and remains a concern as mosquito season enters full swing. Nothing about the virus has changed to make an outbreak less potentially disastrous for infants whose mothers are infected early in their pregnancies. Nothing has changed to reduce the financial and personal costs of dealing with Zika-related disabilities for a lifetime.
Vigilance is still the order of the day. Surveillance is still critical. Remarkably, smartphones may be deployed to get the job done (https://mhealthintelligence.com/news/mhealth-researchers-eye-the-smartphone-as-a-zika-detection-device).

Screening blood donations has turned out to be extraordinarily expensive, some $5.3 million per instance of Zika-infected blood found (https://www.statnews.com/2018/05/09/zika-testing-blood-donors/), so the FDA’s screening policy has recently changed so that pooled donations are tested rather than each individual donation. Given the small number of infected samples found, the idea is to continue ensuring that Zika will not be passed on in blood transfusions, while easing the testing burden and associated costs. (https://www.fda.gov/NewsEvents/Newsroom/FDAInBrief/ucm612702.htm)

Despite the good news about case counts and other progress, lifetime costs for Zika-impacted children and their education still loom. Zika has reinforced invaluable lessons about the crucial importance of both global and local disease surveillance and reporting. And it has made its own rock solid case for timely and adequate funding for effective prevention and research, particularly when the costs, in both human and monetary terms, of inaction are so high. Where infectious disease outbreaks are concerned, we can celebrate incremental victories and larger ones, but we can never let our guard down or be slow to detect and respond.