The Blue Wave and the Bond Markets

The Democratic Party won both Senate seats in Georgia on Tuesday, January 5th. Our own math had a split decision, with each party capturing a Senate seat; but with the sweep the Democrats will now control the White House, the House of Representatives, and the Senate, where a 50-50 split will now be broken by Vice President Kamala Harris.

What does this mean for the bond markets?

For overall interest rates, higher and a reversion to the mean. The charts below show the 10-year and 30-year US Treasury yields. They have been climbing since the early fall, anticipating a Biden victory; but now with the confirmation of a Democratic Senate, we have seen a distinct move up. We do not believe that this is a Taper Tantrum redux. We do believe that it is a reversion to the mean. It is important to remember that the 10-year and 30-year US Treasury yields were 1.9% and 2.4%, respectively, at the beginning of 2020 before the pandemic began. 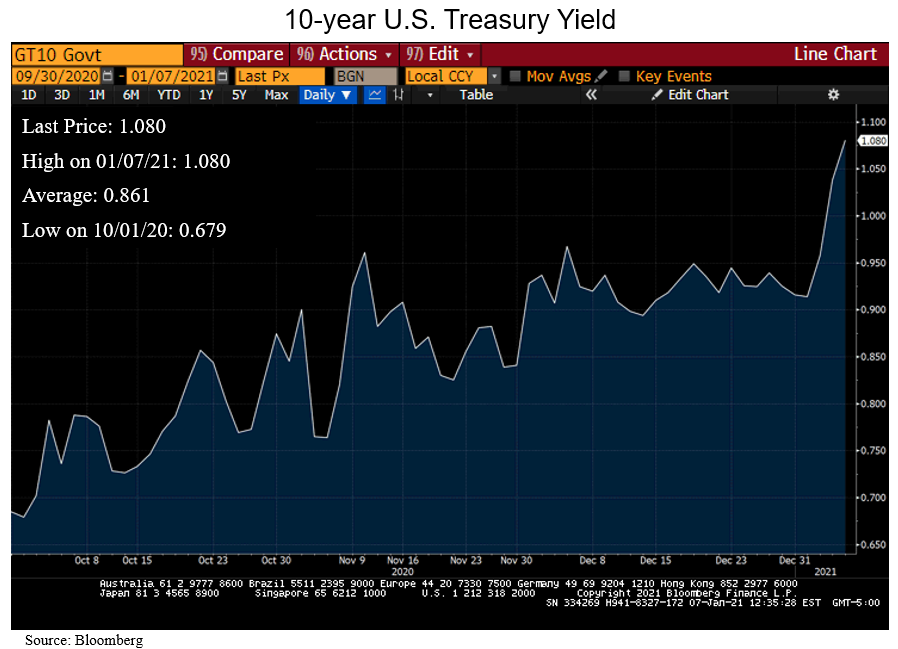 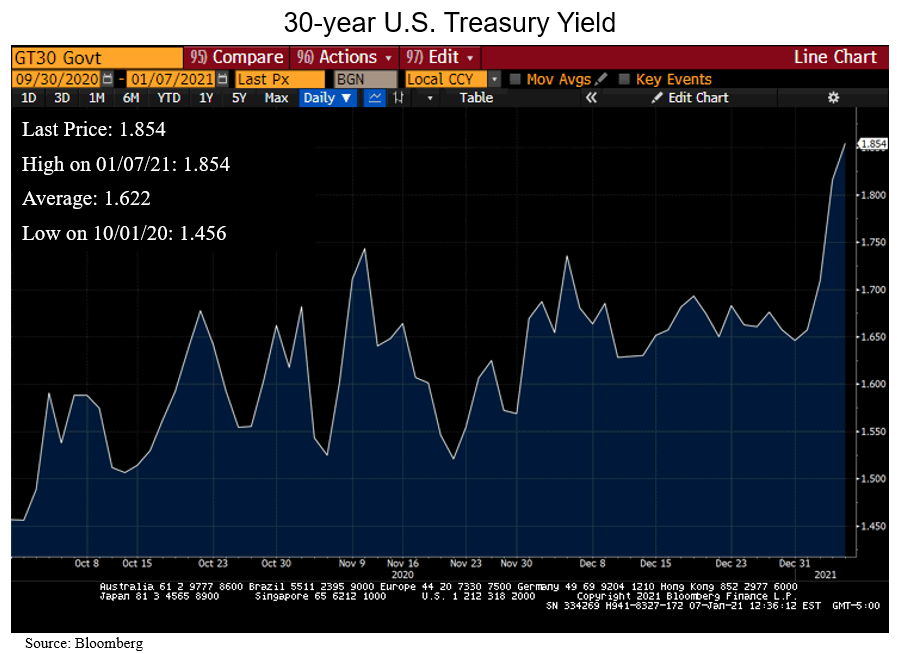 Part of this rise in yields reflects the market’s starting to discount more stimulus and a greater amount of government spending. Clearly, this type of stimulus will up the expectation of inflation down the road. 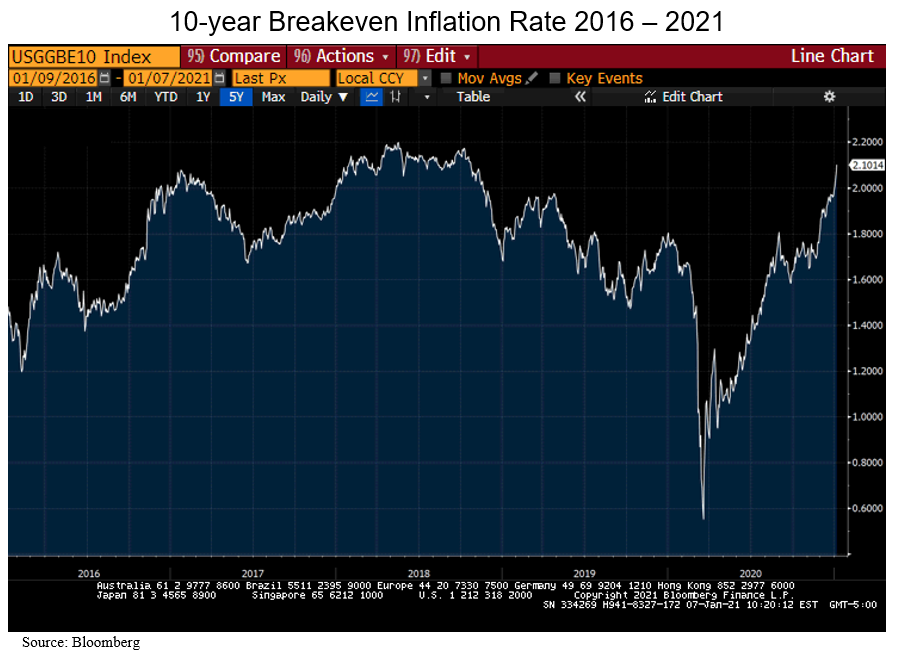 The chart of the 10-year breakeven inflation rate measures the difference in yields between 10-year Inflation-Indexed treasury bond and the nominal 10-year treasury bond. If average inflation is BELOW the breakeven rate over 10 years, an investor is better in a nominal bond; and if it is above the breakeven rate, an investor is better in the inflation-indexed bond. We use breakeven inflation rates as a measure of inflation EXPECTATIONS. Clearly those inflation expectations are RISING with the blue wave and expectations are now above 2%. It is important to remember that this doesn’t mean that inflation necessarily rises. The best bond-buying opportunities in the past have materialized when bond markets sell off because of FEARS of inflation, but we don’t get outright inflation. 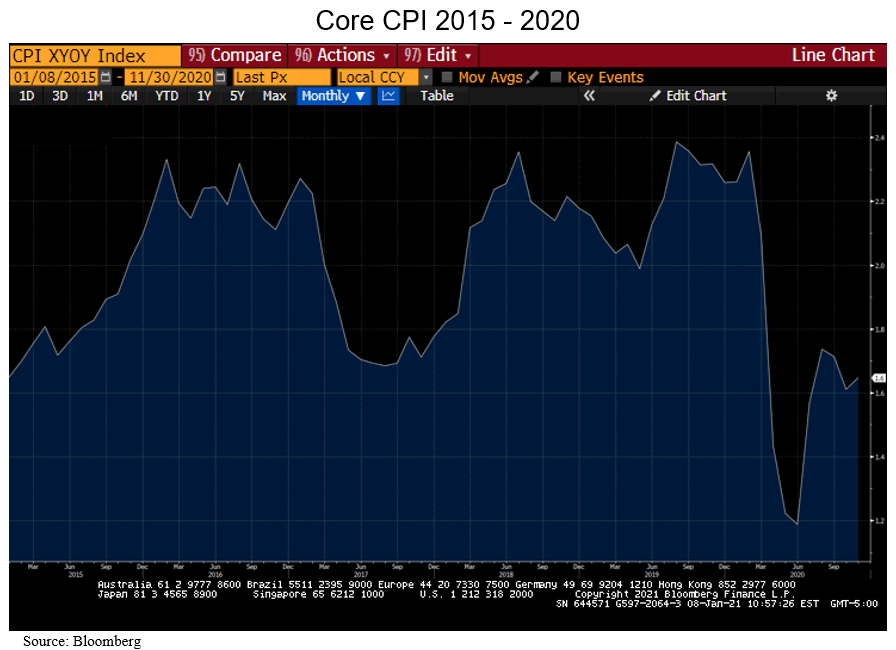 We do expect to see CORE inflation begin to rise. As you can see, core CPI is well off the bottom that we saw in the spring with early pandemic fears in full force, but it is well below the 2 percent plus that was trending before the pandemic. In other words, interest rates STILL have a long way to go to generate a positive spread over the rate of inflation. But we do believe that we will see inflation start to rise as the economy gets to a new normal with a vaccinated populace and a Congress that is much more predisposed to spending in general and to aid state and local governments as well as individuals.

The change in the Senate is beneficial to tax-free munis on several fronts.

First, municipalities will be getting more aid and getting it faster under a Democratic Congress with a Democratic White House. Certainly, many municipalities will benefit from this additional aid, though as we have mentioned in the past, most municipal entities – even troubled issuers like Illinois and New Jersey – have had access to the bond market and have been issuing debt this year. This anticipated assistance will also help, eventually, more pandemically affected issuers such as airports, transit systems, conventions centers, colleges and healthcare systems.

Second, there is no question that income tax rates will eventually rise. However, we believe that the new administration will WAIT until the economy is on a better footing before raising taxes.

Third, we expect the Biden Administration to eventually roll back the SALT provisions of the 2017 tax bill.  To remind folks, the SALT provisions CAPPED the deductibility of state income taxes and local property taxes to $10,000 on a federal tax return. This cap has proved very onerous to citizens in high-tax states such as New York, New Jersey, and California. The rollback will have several effects. It will provide a support for housing markets in the high-tax states as the economy swings back to normal. It also means states that impose high property taxes or high income taxes would start to see a slowdown in the migration of high-income taxpayers to lower tax states. For the last three years, we have seen the shifts in population, say from Silicon Valley to Austin, Texas, or from Long Island, New York, to West Palm Beach, Florida. In other words, the states that have been economic losers over the past three years (New York, New Jersey, Illinois, California, etc.) should see the exodus of their residents to the economic winners (Florida, Nevada, Texas, Georgia, etc.) slow down. There is no question in our view that there is a political aspect to SALT as well, and that is that red (Republican) states have become more blue due to SALT as voters from Democratic states have moved to the more traditional red states. We think Georgia is a perfect example of this in both the presidential election as well as this week’s Senate races.

Fourth, we also expect an infrastructure bill from the Biden administration. This legislation never materialized during the Trump administration, and we feel an infrastructure initiative will help municipalities as well. The mechanics of it remain to be determined, but we know that the types of projects needed include roads, bridges, tunnels, dams, etc. Given the current economic situation, you won’t see projects like new runways at airports or new dorms at state universities, the way we did with the Build America Bonds program.

We deplore the chaos that we witnessed in Washington on Wednesday and pray for cooperation as the nation transitions to a new administration. We do think the transition to higher interest rates – reflecting both the economic recovery as well as the higher level of stimulus – is already under way. Therefore, we are more defensively positioned in total-return bond accounts than we were last summer.