Following a steep decline in 2021, Chinese stocks have provided a roller-coaster ride to international investors thus far in 2022, as positive spurts encounter headwinds that cut short market recoveries. For example, the SPDR S&P China ETF, FXI, after hitting a low in mid-March, staged several partial recoveries and has trended down since early July. In this note we discuss some of the crosscurrents affecting China’s stock market and the Chinese economy. 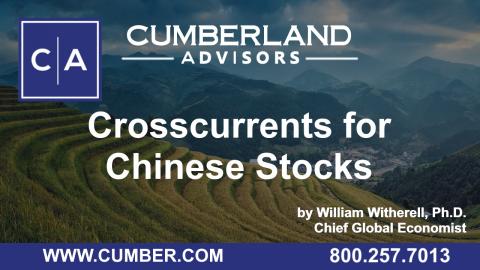 Several recent developments are bullish for Chinese stocks. The most important for US investors is the August 26 announcement that US and Chinese regulatory bodies have reached a preliminary audit agreement that will allow the US Public Company Accounting Oversight Board (PCAOB) to inspect the audit files produced by audit firms in mainland China and Hong Kong. It is hoped that this agreement will resolve a dispute between the US and China that threatened the possibility of delisting in 2024 some 200 Chinese firms currently listed on US exchanges. The combined market value of the shares under threat is around $1.4 trillion. It appears that the Chinese audit files of Alibaba, which is audited by PwC, and Yum China, which is audited by KPMG, will be the first to be inspected. The Big Four accounting firms audit some 130 of the US-listed Chinese firms, a fact which should facilitate the implementation of the agreement. A handful of Chinese firms will be audited initially by the PCAOB, maybe up to 20; and by year end those audits will determine whether China and Hong Kong are compliant with the US standards. The significantly reduced risk of US delisting should provide a tailwind to the US-listed firms. The delisting risk had been an important overhang on the market for these firms. The agreement is also a welcome signal that the two governments can still come together to produce a positive result.

The recent actions by the People’s Bank of China (PBOC) have also been a positive development. On September 5th, the reserve requirement ratio on foreign exchange deposits, that is, the amount of foreign exchange deposits that banks need to set aside as reserves, was reduced from 8% to 6% by the PCOB. This move will increase foreign currency liquidity and reduce depreciation pressure on the currency. This ratio reduction was the second this year. The ratio was cut from 9% to 8% in April. The central bank clearly signaled that it is concerned about the rapid depreciation of the currency, over 3% since mid-August. The strong US dollar and the divergence between US and Chinese monetary policies are the main drivers here. PBOC is well aware of the upcoming 20th Party Congress in October. Its leaning against CNY depreciation has been evident in its recent daily currency fixings. More broadly, the PBOC is pursuing a policy of targeted monetary easing, which does appear to be creating a rebound in lending activity. This is good news, as a liquidity crisis in the real estate sector threatens the economy’s recovery. That sector accounts for 20–30% of GDP and 70% of household wealth. Soft inflation data for August should allow continuation of this approach while most other central banks battle steep inflation.

Another positive development of longer-term importance for China’s financial system is the establishment of a new financial stability fund, or FSF, which will be a key addition to China’s financial system safety net. The FSF will be the lender of last resort when all other support measures fail and thus is complementary to China’s existing bailout mechanisms. Credit risks, particularly for smaller banks with inadequate capital, are rising; and property sector defaults have increased significantly.

The headwinds confronting Chinese stocks are numerous. The economy has clearly slowed during the summer. The S&P Caixin China General Manufacturing Purchasing Managers’ Index (PMI) fell in August, indicating a deterioration in operating conditions, with production rising at the slowest pace in three months. The services sector PMI continued to register a steep increase in service-sector activity in August as disruptions driven by the pandemic and related restrictions eased. A negative warning, however, came in the reported sharp drop in export sales for the service sector, reflecting weakening external demand. This warning was repeated in the August trade numbers for China as China’s trade surplus was softer, with shipments of goods to the rest of the world rising only 7.1% from a year ago, a sharp slowdown from July’s 18% growth. The slowdown is due not only to weaker external demand as global economic output contracted in August but also to the severe drought and heat wave in central China and another round of Covid lockdowns.

The very contagious Omicron variant of Covid is a major challenge to China’s economic growth. While most of the rest of the world is transitioning to living with endemic Covid, China’s zero-Covid policy of lockdowns, currently involving tens of millions of people in megacities like Chengdu, is failing. Insufficient vaccination of the elderly is a factor, but more important is China’s failure to produce an effective vaccine or an antiviral like Pfizer’s Paxlovid and its unwillingness to buy non-Chinese vaccines. The authorities have tried to fine-tune the approach to lockdowns to reduce the negative economic effects. But until there are significant changes in the policy, further outbreaks of Covid will present headwinds for the Chinese economy and Chinese stocks.

There are also downside risks due to the geopolitical situation. US-China relations have become more tense with respect to Taiwan and the South China Sea. Also, on the technology front, new US restrictions that are likely to block sales of high-end processors from US chipmakers have been condemned by China as tech ‘hegemony.’ Earlier prospects for the US reducing or eliminating Trump-era tariffs on China’s exports to the US now seem unlikely for the time being.

Forecasts for the Chinese economy have been scaled back. Slower growth for the global economy looks likely: less than 3% this year, moderating further to close to 2% next year. This slowing would limit any renewed boom in China’s exports. Also, we expect a delayed recovery of consumption because of the risk of further Covid outbreaks and weak employment and income prospects. Government sector spending on infrastructure and corporate investment in strategic sectors will be the main supports of growth in the next 12 months. These considerations lead to China growth forecasts of about 3% for the current year, with the stalled recovery picking up pace in the remaining four months, and of around 5% annually in each of the next three years. Such growth in the world’s second largest economy would still be an important support for the global economy as the US, Europe, and Japan seek to recover from much lower growth rates.

Despite some aborted recoveries, the Shanghai stock market is still down over 10% year-to-date, and the Shenzhen market is off over 20%. Chinese ETFs listed in the US are down more, in part because of the more than 8% depreciation of the Chinese currency and the translation of Chinese prices into US dollars. There certainly is room for Chinese ETFs to outperform in the coming months with, for example, the earlier mentioned FXI down almost 40% from its April 2021 high. Over the medium term the Chinese economy is expected to advance at a pace exceeded by few if any other economies. Yet there are significant downside risks. At Cumberland Advisors we are significantly underweight China in our International and Global Equity ETF portfolios, but this could change any day as we follow developments.

Neither Cumberland Advisors nor the author hold the one security mentioned in this note.