In a recent Wall Street Journal commentary (“Crypto Is Money Without a Purpose,” Dec. 19, 2022), Todd H. Baker argues that crypto activities mimic finance but are really only gambling in disguise. As in casino gambling, where currency is exchanged for chips that are wagered then, at the end of a gambling session, redeemed for currency with a one-to-one exchange rate. 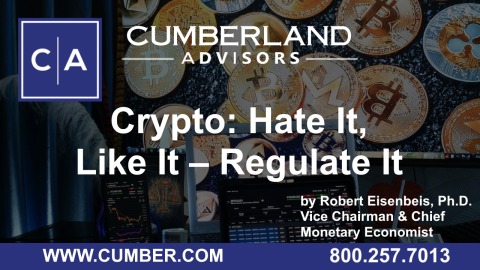 To engage in crypto finance, the customer purchases crypto tokens with currency or transfers funds from a bank account and then hopes for an increase in the price of the tokens. In relatively few situations are tokens exchanged for goods or services; otherwise, to realize true gains, the holder of tokens must convert them back to currency or a bank deposit. Baker argues that purchasing high-risk tokens is gambling that is highly leveraged and opaque. Those who doubt that characterization need only to look at the revelations behind the Bankman-Fried FTX fiasco as it unwinds and we learn more and more about the leverage, self-dealing, opaque transactions among affiliates, and the allegedly criminal activities that no one had a clue about. Indeed, more and more firms are coming under pressure, including Genesis, the crypto lender that is contemplating bankruptcy; and the crypto bank Silvergate, which lent significant amounts to the FTX affiliate Alameda Research, is now experiencing a run. Depositors in crypto companies may also not have valid claims for return of their deposits in the event that an institution fails. A judge recently ruled in the failure of the crypto-lending Celsius Network that deposits were just general creditors of the company and did not have a claim for return of their deposits (https://www.washingtonpost.com/technology/2023/01/05/celsius-crypto-bankruptcy-ruling/).

One other problem is that the reports of transactions in the press express loans and withdrawals in dollar terms but don’t disclose whether the transactions were made in cryptocurrencies or were actual dollar transfers. If it is the former, then the dollar equivalents are relatively meaningless since one token is merely being exchanged for another with no conversion back to a dollar or some similarly denominated asset. The opaqueness of the crypto business is hitting even Bitcoin, the largest player in that market, and is becoming more and more apparent as additional FTX details are exposed and questions are now being raised about Bitcoin’s structure.

Baker is not alone in questioning the usefulness of cryptocurrencies. Nobel laureate Paul Krugman has been skeptical of many aspects of crypto for the past 10 years. Some of his thoughts have been summarized in Markets Insider (https://markets.businessinsider.com/news/currencies/paul-krugman-nyt-bitcoin-crypto-digital-payments-fraud-ponzi-scheme-2022-9). Krugman questions whether crypto tokens meet the definition of money since they clearly have not proved to be a stable source of value. Crypto certainly is not a widely used medium of exchange nor a unit of account that is “tethered to reality.” Most currencies that claim to be fixed to some other real or financial asset to function as a store of value, like the dollar, have proved to have difficulty in maintaining low volatility relative to a peg. Krugman’s main claim seems to be that crypto performs no useful economic function or role, nor does it solve an economic problem that cheaper and easier-to-use technologies already solve. Similarly, Minneapolis Federal Reserve Bank president Neel Kashkari summed up the situation recently in a tweet after the failure of Bankman-Fried’s FTX: “Entire notion of crypto is nonsense. Not useful 4 payments. No inflation hedge. No scarcity. No taxing authority. Just a tool of speculation & greater fools” (Bloomberg, November 18, tweet cited by Scott Lanman). The Atlanta Fed’s president, Raphael Bostic, voiced his concern about digital currencies in 2018, stating “They are speculative markets. They are not currency. If you have money you really need, do not put it in these markets” (https://cointelegraph.com/news/president-of-the-atlanta-federal-reserve-declares-crypto-is-not-currency). Chairman Powell and Vice Chair Brainard took a more moderate stance, calling for appropriate regulation to ensure consumer protection and a level playing field. Powell went on to argue that if there is to be private money, then there should be a federal role in its structure and use. Vice Chair Brainard, in a recent speech, highlighted lessons from the turmoil in crypto markets, citing crypto volatility, susceptibility to runs on even so-called stable coins, and vulnerability of crypto platforms to deleveraging and fire sales; and she stressed that decentralized lending that relies upon overcollateralization can suddenly collapse as collateral declines in value. Interestingly, Europe appears to be headed towards strict regulation, while two countries (El Salvador and Central African Republic) have accepted crypto as legal tender.

Prior to the FTX collapse, not all in the Federal Reserve were negative on crypto, and many groups across the system began projects to better understand the implications of its evolution. The Boston Fed initiated a project in early 2022 to explore the issues surrounding digital central bank currencies and released a joint study with MIT. Similarly, the New York Fed released in late November 2022 the first phase of a project on wholesale central bank digital currencies and the results of its 12-week experiment to develop a prototype wholesale digital currency to clear and settle international transactions. But a lot of the more sympathetic views may have changed with the recent joint statement on crypto from the Fed, the FDIC, and the Office of the Comptroller of the Currency on Tuesday, January 3, 2023, warning about the risks of banks should they decide to step into the crypto market and stating that such efforts may be inconsistent with safe and sound banking. The agencies cited concerns about the business models employed in the crypto industry and about the susceptibility of stable coins to runs.

The other side of the crypto controversy is illustrated by a WSJ rejoinder by Peter Goettler, president of the Cato Institute, who argued, “As an application of freedom and innovation to create an alternative to government-controlled fiat money, crypto’s reason for being could not be more clear or noble. Government money leaves the economic well-being of citizens subject to the motivations, competence and whim of politicians and bureaucrats.” That anti-government view of the control of money ignores history and the repeated collapse of unregulated fiat currencies in the past history of the US and other countries as well, not to mention the current unrest in the crypto markets. To be sure, we have always had various forms of nongovernment money. Bank deposits are not government currency, nor are credit and debit card transactions. But bank deposits are federally insured, and debit and credit card transactions clear and ultimately settle through the banking system. The Fed’s ACH transfers large amounts of funds among institutions on a daily basis, and digitization has largely eliminated paper checks, which are converted at the point of sale to electronic images that are then cleared and settled, a process called check truncation. Similarly, Fedwire has been in place for a long time to transfer government securities in electronic form. Paper US Treasuries no longer exist.

Further, the argument that crypto transactions have the benefit of being cheap and facilitating immediate settlement in a timely fashion also fails to hold up under scrutiny. This claim ignores the energy costs in producing crypto tokens. For example, it is estimated that the largest cryptocurrency, Bitcoin, accounts for as much energy in its production as the entire annual electrical consumption of Argentina or Australia (https://www.whitehouse.gov/ostp/news-updates/2022/09/08/fact-sheet-climate-and-energy-implications-of-crypto-assets-in-the-united-states/).

It is also claimed that access to digital currencies would enable low- and moderate-income consumers to participate in the financial system. However, consider both the math and the technical sophistication that would be involved for a consumer to purchase a $3 loaf of bread with a Bitcoin. The smallest denomination of a bitcoin is called a Satoshi and is equal to one hundred millionths of a bitcoin, or 0.00000001 (https://www.investopedia.com/terms/s/satoshi.asp). At the current dollar price on January 6, 2023, one US dollar equals .000058 bitcoin. So, to purchase a $3 loaf of bread using bitcoins would cost .000174 bitcoins. To make the purchase the customer would have to have established a Bitcoin account either with an exchange or another provider and have to decide where to hold the Bitcoin. Where does one do that? In addition, he or she would need the necessary technology to make the payment — an app such as BitPay, for example — while the merchant would have to agree to accept Bitcoin. Cryptocurrencies are of different denominations, so if the merchant would only accept Ethereum, then the purchaser would have to be able to exchange, using technology, bitcoins for ether. Since one bitcoin equals 13.39 ether, the cost of the bread would now be .00232986 ether. It seems clear that the math alone would be a challenge for most people, let alone having to keep track, on almost an hourly basis, of the market prices of the crypto tokens that might be needed. And to what advantage over the present use of currency, debt cards, and credit cards, all of which avoid the kinds of calculations noted above?

Given all that has happened recently in the crypto space, plus reasonable questions about the true nature of the underlying crypto market’s structure, Baker suggests that dealing in the crypto space should be totally separated from banks and the traditional financial system so as to avoid unwittingly having governments drawn into that space via the back door, thereby risking the financial stability of the system. He goes further to argue that existing regulators, including the SEC, CFTC, the banking regulators, and Consumer Financial Protection Bureau should not be charged with crypto oversight. The bottom line here seems to be, go slow and see how that market evolves before acting preemptively, without full knowledge of potential unintended consequences. For a useful primer on crypto see https://www.bankrate.com/investing/cryptocurrency-statistics/.