Last week, as both central bankers and investors seek to chart the best path ahead through uncertain and volatile waters, the European Central Bank (ECB) delivered a dovish surprise to the market. Current uncertainty about the future exceeds the usual range faced by central bankers. 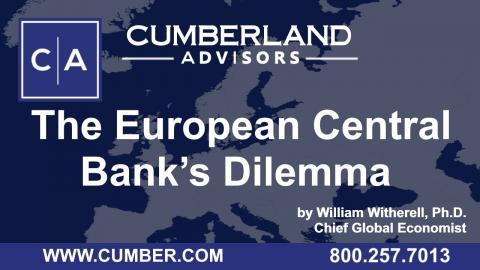 The European economies were coming out of the pandemic when they were hit by a new shock, the Russian invasion of Ukraine. The war will impact economic growth through supply chain issues and a marked deterioration in business optimism while causing a spike in energy and other commodity prices. Inflation in Europe was already rising rapidly before the war started. Price growth in March was 7.5%. ECB policymakers now face the difficult task of determining how to tighten monetary policy sufficiently to tackle surging inflation while the European economies risk a steep downturn due to the Russia-Ukraine war.

The risk to the economy was underlined by the latest projections of the IMF, which pointed out that if the ECB “starts to address inflation, then it is going to make the softening of aggregate demand worse.” The IMF revised their growth outlook for the European Union for 2022 downward by 1.1 percentage points to 2.8%. The projections for the largest economies are Germany, 2.1%; France, 2.9%; Italy, 2.3%; and Spain, 4.8%.

The ECB appears to share the IMF’s concern about safeguarding growth in Europe as monetary policy makers take steps to check the cycle of higher prices and inflation expectations. At its meeting last week, the ECB stuck with its announced plans to gradually reduce economic stimulus measures. Policy interest rates were left unchanged, and ECB President Christine Lagarde’s comments made clear that a gradual process of normalization will be pursued. The Bank’s asset purchase program is scheduled to end in the third quarter. Interest rate increases are then likely to follow at a pace that is expected to be gradual.

This policy outlook differs from that being followed by central banks of economies hit less hard by the war — in particular, the United States and the United Kingdom, where policy interest rates are increasing sharply. It is not surprising that the euro has dropped to a two-year low last week. While that drop would normally help exports, the supply and cost headwinds occasioned by the war are stronger negative factors. As Lagarde said, “Downside risks to the growth outlook have increased substantially as a result of the war in Ukraine.” This week hawkish comments by some ECB officials have increased tightening expectations leading to some recovery of the currency.

To an unusual degree, equity investors are faced with uncertainty precipitated by the war, rising inflation, supply problems, and the pandemic. Equity markets, nevertheless, have shown considerable resilience this year. International equity markets as measured by the iShares MSCI ACWI ex US ETF, ACWX, are down 7.9% year-to-date as of April 19, and just 2.25% in the past month. The STOXX Europe 600 Index is down 5.68% year-to-date but, remarkably, is up +1.2% over the past month. Cumberland Advisors’ International Equity ETF Portfolio is fully invested, including our positions in Europe. Developments in Europe are being monitored closely.