The recovery of the European economies in the first eight months of this year from the pandemic-induced recession has been impressive, despite the headwinds stirred by a resurgence of COVID-19, particularly its Delta variant, and severe material shortages and transport bottlenecks. 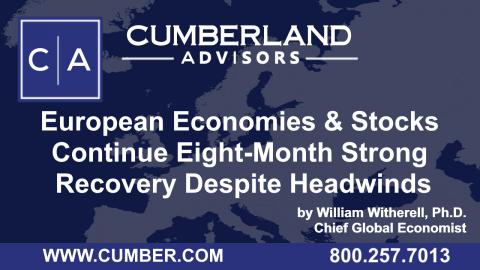 European stocks registered the best advances since the end of the 2012–13 financial crisis, buoyed by the resurgence of economic activity, very low interest rates, fiscal stimulus, and healthy corporate earnings. The STOXX Europe 600 Index, which covers the markets in 18 European countries including 15 markets in the Eurozone and the United Kingdom, Switzerland, and Sweden, rose every month thus far this year and was up 18.3% year-to-date at the first of September. This gain comes close to the 20.8% gain in the booming S&P 500, and the STOXX Europe 600 outperformed both the 10.2% gain in the MSCI ACWI ex USA Index, which covers all markets outside the US, and the 13.0% gain in MSCI EAFE Index, which covers the markets of all advanced economies outside of North America.

The just-released final August PMIs (Purchasing Managers’ Indices) for Eurozone economies indicate a slight slowing in expansion from the July pace, which set a 15-year record. This slowing may be the first sign that the initial post-reopening boost is fading to a degree, as expected. Nevertheless, these leading indicators still point to rapid rates of expansion in output and demand and a strong third-quarter economic growth rate. One exception to the slight slowing in euro-area economies in August was Italy, where the pace of economic expansion accelerated, driven by faster manufacturing activity.

The rapid uptake of new work led to a marked increase in euro-area employment at one of the fastest rates in two decades. Yet staff shortages are reported to be holding back output in the service sector, which is a concern, as services are expected to lead further recovery in the coming months. The industrial sector in most European economies is struggling with global shortages of key inputs and near-record delivery times.

Another recent indicator of economic activity is the report on Eurozone retail sales in July. Sales of food and tobacco eased by just 0.7%; but non-food product sales fell 3.5%; and internet and mail-order sales dropped 7.3%, following a 6.5% in June. It is not surprising that consumers are shifting back to physical stores as well as from goods to services. Since retail sales remain above the pre-pandemic level, these data do not suggest overall weakness for the Eurozone economies.

Outside the Eurozone, there are some indications of more moderate growth in the PMIs for August. In Sweden the August PMI dropped for the fourth consecutive month, while still well above its historical average. The report suggests that growth in manufacturing “has entered a calmer phase” after recovering from last year. The Swedish economy remains one of the best-performing in Europe. The PMI report indicates that supply shortages and disruptions are a growing challenge. The Switzerland PMI for manufacturing fell in August from a record high in July. Unlike the reports from other countries, the Swiss report found that supply chains “are not lengthening quite as much as they were in the previous month.” In the UK the composite PMI fell to the weakest level since February, signaling “a much slower speed of recovery across the private sector economy” now that the boosts from reopening the economy are largely past. The UK economy was earlier than the Eurozone’s to recover because of its relative early success in dealing with COVID and now appears to be earlier in seeing a fading of the boost from the reopening of its economy.

Looking ahead, economic growth in Europe is probably peaking in the very strong current quarter and will likely return gradually to more normal long-term rates. Despite the recent increase in inflation, the European Central Bank is expected to be cautious in tapering its bond-buying programs that have kept interest rates very low. While the pandemic emergency purchase program (PEPP) may be reduced, the longer-running quantitative easing programs may be beefed up to take over and avoid any premature credit tightening.

The two biggest downside risks to this outlook are the continued threat of further waves of the pandemic and supply shortages. The European economies have been resilient despite the fourth wave of COVID, but future developments in this disease are unknown. Germany, France, and Italy are shifting to a longer-term strategy of moderating the impact of a third winter living with the pandemic – booster shots, mask-wearing, and social distancing – recognizing that the pandemic is not over. Supply chain delays are continuing to hit manufacturers hard and are likely to remain a significant constraint for months to come.

In contrast, the iShares MSCI Switzerland ETF, EWL, gained 5.9% in the last three months and is up 16.2% year-to-date. The fact that the largest sector in the Swiss index is health care probably played a role. The strongest-performing European market ETFs this year have been the iShares MSCI Netherlands ETF, EWN, up 29.8% year-to-date, and the iShares Austrian ETF, EWO, up 29.6%. While EWN continued to outperform in the past three months, adding 7.4%, EWO registered little change, +0.4%, during this period. These variable results over a period when the economic recovery was a common feature of these economies demonstrate that many factors affect equity market performance in addition to economic growth. Diversification of portfolio holdings is important to reduce risk, as is continued careful monitoring of developments.

Of the above-mentioned ETFs, Cumberland Advisors currently holds the following in its accounts: EWG, EWD, EWQ and EWL. The writer holds none of them in his personal accounts.