Seldom, if ever, has a president had the opportunity in the first year of a term to make so many appointments that may significantly impact the direction of monetary and financial regulatory policy. 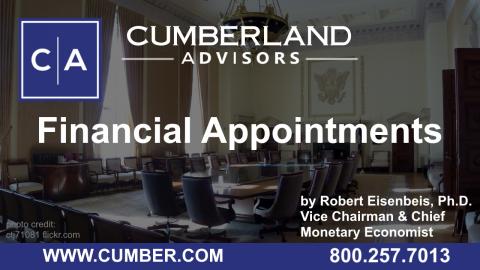 There are three vacancies on the Federal Reserve Board of Governors to be filled, as well as the chair of the FDIC. For the Fed, the key issues are how to address policy accommodation when inflation is far above target and what to do about normalizing its balance sheet. Not only is the Fed facing change at the federal level, but there are also presidential vacancies at the Federal Reserve Banks of Boston and Dallas to be filled, and the vacancy at Boston is for a voting member of the FOMC in 2022. For the FDIC the issues are political, since the outgoing Trump-appointed chair, Jelena McWilliams, has apparently clashed with the Democratic majority members of the FDIC board over regulatory policy concerning mergers and climate change.

First, a brief discussion of the issues to be faced and what these issues suggest about the need for expertise on the part of new appointees. The Fed has been pursuing an accommodative strategy, setting the target range for its short-term federal funds rate between 0% and .25%, and it has held that rate since March of 2020. Concurrently, the Fed has also engaged in asset purchases, flooding the market with liquidity, until its balance sheet topped $8.8 trillion. At the same time, unemployment has been below what the committee has viewed as full employment, and inflation has increased to more than twice the FOMC’s target of 2%. A primary challenge is navigating a smooth transition without causing a recession like the one that occurred in the 1979–1981 period, when Chairman Volcker raised rates sharply to cure the inflation that started under Chairman Burns. Such problems require professional policy experience in macroeconomics and labor economics.

The issues at the FDIC are different. First, there is a five-person board, with three members appointed by the president plus the Comptroller of the Currency (the acting director is currently a Democrat) and the director of the Consumer Financial Protection Bureau (also currently a Democrat). The law requires that no more than three can be of the same political party. Because the position of vice chair is currently vacant, Chair Jelena McWilliams, who has resigned, was the only Republican facing three Democratic board members. She stopped the three Democratic board members who voted to seek public comment on the FDIC’s bank merger approval process. McWilliams’ action triggered further procedural concerns about whether a majority of the FDIC board could put items on the agenda and vote without the chair’s consent. The substantive issue centers around the consolidation that has taken place in the banking industry, the problems that concentration poses for new entrants, how the FDIC should consider the impacts of mergers on local communities, and how mergers might impact financial stability. There is also concern about bank regulatory policy as it concerns banks’ role, if any, in combatting climate change.

At present, because there are already three Democrats on the FDIC board of directors, any people to be considered must be Republicans. One of the existing directors, Martin Gruenberg, who is presently serving as acting chair, could be appointed chairman, which would give the Democrats control of the agency even with two Republican appointees as directors. Such a move would surely result in the kind of review of the bank merger approvals process that was at the root of the problem experienced by former chair McWilliams. But for now, no names are currently being circulated as candidates.

The situation at the Fed is more interesting. Several names have been circulating over the last few days as potential appointments, and all appear to be well credentialed for the positions in terms of professional accomplishments and, most importantly, Federal Reserve experience at either the Board level or at the Reserve Banks.

For the position of Vice Chair for Banking Supervision, Sarah Bloom Raskin’s name is being widely mentioned. She is an attorney with extensive banking and regulatory experience both in the private and public sectors, having served as commissioner of banking for the State of Maryland and as a staff member of the Senate Banking Committee. Ms. Raskin also served on the Federal Reserve Board from 2010 to 2013, until she was appointed deputy secretary of the Department of the Treasury. In 2021, she was named the Colin W. Brown Distinguished Professor of the Practice of Law at Duke Law School. Finally, she is the wife of Democratic Congressman Jamie Raskin and is favored by Senator Elizabeth Warren. Her credentials suggest broad familiarity with bank regulatory policy, monetary policy, and the culture of the Federal Reserve.

Another potential candidate, Dr. Lisa Cook, who is currently an economics professor at Michigan State University, has served as a member of President Biden’s transition team as Deputy Team Leader for the Federal Reserve, Banking, and Securities Regulation Agency Review Team. She is a specialist in international economics and an expert on Russia. She spent the 2012 academic year to the Council of Economic Advisors. Dr. Cook has been extremely active in the profession as a research associate at the National Bureau of Economic Research, on the editorial board of the American Economic Association’s Journal of Economic Literature. Most importantly for the Fed position, she has had visiting appointments at several of the Federal Reserve Banks, including New York, Chicago, Minneapolis, and Philadelphia, and is a member of the Advisory Board of the Federal Reserve Bank of Chicago. This Fed experience means that she has been exposed to the cultures of several Federal Reserve Banks and understands their roles in helping to inform and shape monetary policy.

All three of these candidates appear to be well qualified, and now the key issue is whether any will be nominated and ultimately if nominated can they pass the Senate?