We just had the Consumer Price Index released and there are many headlines about it. So we won’t regurgitate them here. We just want to remind readers that there are multiple views about this “transitory” notion of inflation. Here’s some commentary to think about. 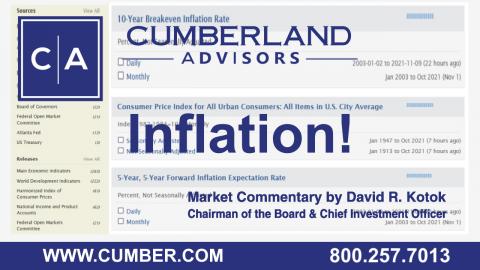 In late October, we shared with readers a commentary by Professors Danny Blanchflower of Dartmouth and Alex Bryson of University College, London, entitled “Now is not the time to raise interest rates in the UK” (https://www.cumber.com/market-commentary/guest-commentary-professors-d-blanchflower-bryson-0). In this article, the two scholars argued that raising UK interest rates would be ill-advised and could contribute to a recession there. Readers may want to substitute the US for the UK in terms of concept as they read Danny’s comments.

Today, we offer a sequel to that commentary, which explores, along with recent policy decisions in the UK and the US, the question of inflation and how it is calculated, and reasons for continued restraint with regard to raising rates, including possible signs of looming recession in the US. We would like to thank Danny for giving us permission to share his deeply informed perspective and an excellent explanation of how CPI is calculated and thus how it rises and falls over time. My own thoughts follow at the end of his essay.

“A primer on (UK) inflation,” by Danny Blanchflower

The Monetary Policy Committee this week sensibly pulled back from the brink at the last minute. Governor ‘U-turn’ Bailey and the new chief economist, Huw Pill, had tantalized markets with indications that a rate rise was coming at the November meeting, and markets believed them even though the other members of the committee hadn’t spoken. Markets were fully expecting a rise, although in a survey taken by Bloomberg, economists were split evenly on whether a rise would come or no. The mood music rose to a fever pitch before being dashed at noon on Thursday. In the end the rate rise didn’t come, and the pound fell on a vote of 7–2, with the Governor on the side of the majority voting against. My guess is he was the last voter; and with six votes against, he wasn’t going to be in a minority. After all that upset, he became ‘U-turn’ Bailey or, as the Guardian’s Larry Elliott proclaimed at the press conference, another unreliable boyfriend, promising much and not delivering, just as Governor Carney had been labelled.

In my view there was never any basis for a rate rise. The economy had been hit hard by the COVID pandemic and had slowed again from the spreading of the Delta variant, especially among school-age children. The best analogy is that the UK was hit by an even bigger hurricane than the one Michael Fish failed to spot. It takes a while to restore electricity and rebuild. We still don’t know how long rebuilding will take, especially as the payments to the furloughed workers have just been removed and there have been cuts to UC and national insurance payments for employers and employees are set to rise. Consumer confidence and output have ticked down again.

My concern also is that there are signs the United States may be headed for recession, based on declines in consumer confidence, which have predicted six of the last six recessions in the US since 1980. The GFK Consumer Confidence Index in the UK has also been declining the last three months. Recall that when the US coughs, the UK catches a cold. The right course of action right now is to wait and see. We should note, of course, that every rate rise in the last dozen years, or call for one, has in my view been in error. The main reason is that the rise in inflation is clearly transitory and will fall away back to around 2% by year end. Nothing for the MPC to do here.

The day before, the Federal Reserve (the Fed) in the United States started to reduce how much stimulus they were putting into the US economy, by buying fewer assets every month. That is, they are reducing stimulus by $15 billion a month (asset purchases) and will be reducing from a $120 billion a month to zero in eight months. Chair Jay Powell made it clear at his press conference on Wednesday that rates were not going to rise any time soon, as inflation is transitory, just as it is globally. Christine Lagarde, president of the European Central Bank, had said much the same over the last month. Governor Bailey admitted as much at his press conference the following day.

Why is the rise in inflation likely temporary? Let me explain. Inflation is the change in prices of a representative basket of goods. If prices of most goods rise, people can stop buying them altogether and go for a cheaper substitute. What is in that basket of goods changes over time as people move away from buying dearer goods, replacing them with cheaper ones. Some goods, like milk, people can’t substitute; but other goods fall in price. Timber prices rose sharply and fell back as people stopped buying wood. In September, the price of bread and cereals fell 0.9% on the month, so buy bread.

First off, we need to clarify that central banks target price changes, not price levels. So, if in year one prices rise from $100 to $103, in year one inflation is 3. If in years two and three prices remain at $103, prices are clearly higher than they were in year one; but in both year two and year three inflation is zero. In addition, people have trouble with this question: “If inflation goes from 3% in year one to 2% in year two, have prices gone up, down or stayed the same?” The answer is they have risen, but at a slower rate. People struggle when asked what the inflation rate is and usually overestimate it. Remember: the 0.9% rise in October (just released data) will drop out in a year and is likely to be replaced with something lower.

How CPI inflation changes each month is actually highly predictable. Let me explain. As a first approximation, it is, in fact, simply the sum of twelve successive monthly changes. Each month, the ONS reports the CPI for the month as well as monthly changes for this month. Let me take an example. The ONS declared that the CPI for December 2020 was 0.6%. That figure is simply the sum of the twelve monthly changes from January–December 2020. Next month, January 2021, eleven of the changes to be used in the calculation are already known; that is February through December. We are going to get a new number for January 2021, which replaces the -0.3 for January 2020. So, dropping the -0.3 and acquiring the -0.2, the CPI rises from 0.6% to 0.7%. In the next month we have the 0.7%, and we have dropped a 0.4% and gained a 0.1%, so the CPI becomes 0.4% and so on. These one-off big numbers will drop out next year and be replaced with smaller ones, so inflation falls. It is hard to imagine that these jumps will repeat themselves next year, which is what would be required for this inflation to not be temporary.

Over the next couple of months, UK inflation is set to rise as the 0 and -0.1 drop out and are likely replaced with bigger numbers. An issue arises because inflation can rise either when a low number is dropped or when a high number is acquired. Acquiring higher numbers is worse. What we are going to see over the next few months is that the big numbers will drop out and likely be replaced with smaller ones, so inflation will fall.

There is little chance that the price increases this year will be repeated next year. These are uniquely uncertain times, and the right thing for monetary policy is to wait and watch and see what develops. Hopefully COVID will disappear into the ether and things will be back to normal; the last thing the UK needs is for the MPC to make an error and raise rates too soon and make the transition to normality harder.

My most recent conversations with Danny confirm that, in his view, the economy is weakening rapidly, and we will likely see the results in the near future. He reminds us that in 2007 the monthly employment numbers seemed robust and gave no warning about the 2008 recession and financial crisis, and his thinking is that this may be the case again today. Danny is onto indicators that bear close attention.

For our Cumberland clients we offer the following view. Whether we have a recession coming, we don’t yet know; but if we dissect the employment statistics and look deep into the details, the revelations show that the job numbers are not so robust as to justify the celebrations we’ve seen from certain politicians (some of whom have red stripes and others have blue ones) and are not so robust as some commentators want us to believe. I suppose the bottom line with respect to the politicians is that skunks come in all stripes, but they are still skunks.

And as for the commentators and prognosticators, the best thing for this writer is to say that humility is much more important than arrogance when it comes to forecasting anything.

So, with humility in mind, our conclusion for today is that we don’t yet know where the months ahead will take us, but we respect the work we are seeing, and we believe it’s a warning to pay very close attention to the evolution of details. That is why we are sending sequential writings about the labor markets in their various elements, so readers can observe what we are following and thinking about.

In addition to jobs issues let me add one additional fact. Every penny a gallon in the gasoline price amounts to a direct $1.5 billion annualized tax on the American consumer. That is a transfer taking place every single day. Even if you drive an EV, the cost of the electricity to power it is rising. If you’re in NY and take the subway, you may not see the consumer cost impact. But if your in South Dakota and drive a lot, you certainly will see it. Cumberland has clients in both places and their personal anecdotes are valuable to us in assessing the entire country.

Let me take the opportunity, in closing, to note once again that Danny Blanchflower and Alex Bryson have written three thought-provoking NBER papers papers regarding the role of sentiment indicators in forecasting economic recessions and employment trends. They are recommended reading.

1. David G. Blanchflower and Alex Bryson, “The Economics of Walking About and Predicting US Downturns,” NBER Working Paper W29372, https://www.nber.org/papers/w29372