While we’re escaping the world on Labor Day weekend let’s not forget that a new, rapidly mutating, highly infectious variant of SARS-CoV-2 detected in South Africa and several other countries is becoming necessary to track; the WHO is doing now, because of its rapid mutation and its concerning characteristics. Please see this 18pg study: https://www.medrxiv.org/content/medrxiv/early/2021/08/24/2021.08.20.21262342.full.pdf 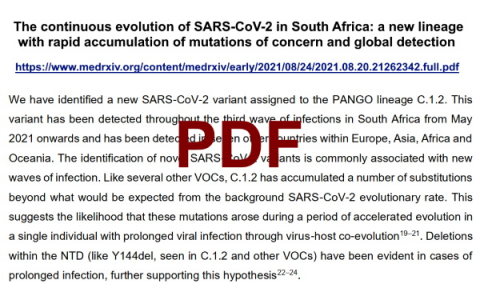 We suggest two reads about C.1.2. The first is a recent article in the Jerusalem Post: “New COVID variant detected in South Africa, most mutated variant so far,” https://www.jpost.com/health-science/new-covid-variant-detected-in-south-africa-most-mutated-variant-so-far-678011.

The second is a Twitter thread on this variant by Dr. Eric Feigl-Ding, an epidemiologist and health economist who currently serves as a senior fellow at the Federation of American Scientists. Feigl-Ding once again offers a quick, richly sourced overview of what we know and what we should be concerned about. The thread begins at this link: https://twitter.com/DrEricDing/status/1432200392776028162?s=20, or readers may view the spooled thread below.


COVID is clearly not over and may have more challenging curveballs yet to throw at us.

A thread by Eric Feigl-Ding

NEW VARIANT—a new #SARSCoV2 variant C.1.2 just identified in South Africa & several countries, with concerns it could be more infectious and evade vaccines. #C12 also has mutation rate that is nearly twice as fast as the rate of the other variants. (jpost.com/health-science…)

Study comes from a new preprint by South Africa's National Institute for Communicable Diseases. The new variant has "mutated substantially" and is more mutations away from the original virus than any other variant detected so far worldwide”—wow! (medrxiv.org/content/10.110…)

What does that mean above? It means that #C12 variant has somehow mutated so fast and far that it is now the FURTHEST MUTATED variant found to date! It has mutated the greatest genetic distance from the original Wuhan 1.0 strain—and implies potential troubles for 1.0 vaccines.

It gets worse with #C12… it has a 1.7x to 1.8x faster mutation rate than the average of all other variants! The authors note this coincides with the emergence pattern of other really bad VOC variants. (medrxiv.org/content/10.110…)

Let’s visualize how much farther and faster the new #C12 variant is - it is much much faster in mutation rate and it has gained the farthest distance from Wuhan 1.0 strain (denoted by “0” distance). This means #C12 is the most mutant of all mutant variants found to date!

“The study found consistent increases in the number of C.1.2 genomes in South Africa on a monthly basis, rising from 0.2% of genomes sequenced in May to 1.6% in June and then to 2% in July, similar to increases seen with Beta & Delta variants there.” Pattern recognition? To be clear, the mutation rate of #C12 being “nearly twice as fast” is how quickly it gained mutations in a short period. It won’t necessarily continue to - but it certainly did in the time of window that it took to emerge.

“More than half (about 52%) of the mutations in the spike region of the C.1.2 sequences have previously been seen in other VOCs and VOIs. The mutations N440K and Y449H, which have been associated with escape from certain antibodies, have also been noticed in C.1.2 sequences.”

“The scientists stressed that the combination of these mutations, as well as changes in other parts of the virus, likely help the virus evade antibodies and immune responses, including in patients who have already been infected with the Alpha or Beta variants.” oh boy.

Why is #C12 worrisome for immune escape? Here are many technical mutation details why. Also, I highlighted the worry about #C12’s mutations on the virus furin cleavage site - which helps the virus bind human cells faster. Bottom line—The authors are worried.

This #C12 is obviously a very fast moving variant. We don’t know exact transmission yet or severity or vaccine efficacy yet. But the best advice that will serve us well is to take the PRECAUTIONARY PRINCIPLE as the approach—“move fast”!!!

Until we know more, let’s follow the damn precautionary principle to heart — and STOP these crazy mass gatherings please! For the love of god, or for the love of our kids… please… two variants emerging in one day is not a good trend.

UPDATE—I have just gotten direct confirmation from my @WHO colleagues that they are investigating and following up on the new #C12 variant from South Africa. Also note that C12 is already detected in England, Switzerland, Portugal, Mauritius, China, and New Zealand!


Observation—Delta came from India (with very few vaccines but high past infection rates), and so did #C12 from South Africa which also has a very low 8% fully vaccinated rate, but large past waves. Hence these new super variants did NOT come from high vaccinated countries. Thus, for those claiming vaccines are a major cause of these super bad variants—they are dead wrong. Unfettered spread of the coronavirus is what gives the virus more chances to practice in our bodies and learn to adapt against a body with no ready vaxxed immunity. DURATION infection really matters for variants to emerge. The longer it lingers, the more time it has to learn, adapt & develop new evasive mutations. But vaccines both lowers risk, and also SHORTENS INFECTION TIME! Ergo less risk of variants if vaxxed

Scientists in UK think what causes new sudden variants is often an immunocompromised person who doesn’t fight off the virus quickly & allows it to linger in their body for an extended period of time (more practice time). Also why vaccine boosters for immunocompromised key.

This variant-emergence problem in weak immunity persons is also what happened in Boston with one immunocompromised man who was highly infectious for 155 days before he died—and developed virus with 20 mutations during that time! This is why vaccines key to reduce this chance.

The first American news outlet finally picks up the #C12 story. Their assessments are similar. (bloomberg.com/news/articles/…)

They also note the scientist note the “concerning constellation of mutations” that “are associated with increased transmissibility”’ these are the authors words, not my mine. I am not sensationalizing. #C12 is [so] worrisome that @WHO is investigating too.