The January 25th GIC-USFSM conference on adaptive climate change, Adapting to a Changing Climate: Challenges & Opportunities, to be held at the University of South Florida Sarasota-Manatee, includes discussion of fires as well as hurricanes. Here is a recent Bloomberg story for reference: “What Wildfires and Hurricanes Mean for the Global Economy” (https://www.bloomberg.com/news/articles/2018-11-22/what-wildfires-and-hurricanes-mean-for-the-global-economy).

2018 has been a horrible and murderous year for fires. We all know that. The issue for climate change deniers and for climate change believers is whether we can expect normalcy or whether something is different now, requiring adaptive solutions. January 25 will focus on that question.

Cumberland Advisors is proud to sponsor this conversation, which presents skilled professionals in a transparent and independent forum. Attendance costs only $50 to cover lunch (registration here).

Now we offer a guest commentary about the California fires. We thank our good friend and GIC board colleague Philippa Dunne for sharing her essay with our readers. Philippa is coeditor of three  macroeconomic newsletters – The Liscio Report, which has a trading focus, Sightlines Bulletin, which offers “concise data-driven monthly analyses of the direction of the American economy,” for professionals and academics, and TLR Wire, frequent, short notes and graphs on important aspects of fresh data missed by the mainstream intended for all readers You can learn more about both and subscribe at http://www.tlranalytics.com.

Two differences jump out when we attend conferences with a higher percentage of speakers who were not born in the US, but may teach here, and we share these now as observations, not criticism. There is considerably more concern voiced about the effects of market concentration and pricing power, which we have outlined; and there is a general sense that US citizens, perhaps especially those in the financial markets, are not accurately anticipating the market impacts when, say, lawsuits and insurance claims caused by extreme weather start rolling in at an ever faster pace.

I grew up in Malibu, where fires were a central part of my childhood.

Every fire has its own unforgettable personality. One marches as a belligerent wall, missing little in its path to the shore; one changes its mind at the last minute, trapping the fire crews and their equipment on the wrong side of the column; and some, like the recent Woolsey fire, flame seemingly in all directions, pouncing on areas the size of football fields in a second.

And they all have different ways of introducing themselves. Sometimes a bunch of tumbleweeds thud into the house: the Santa Ana wind. Sometimes sirens race up the highway; by the time I was five, I could tell which canyon they turned into; and sometimes I would first see reflected flames flickering in my window. Then it’s grab all the animals and your toothbrush, unlock all the doors and gates for the firemen, kiss the ground by your bedroom door with hope, and head for the Georgian Hotel in town. From our rooms there we would stay up all night, looking out across the bay as the unspeakably beautiful flames winged up and down the mountains, seemingly in silence although we knew they were panting.

Firefighting is a male-dominated field. The first female firefighter in this country was Molly Williams, Volunteer #11, a slave owned by a New York City merchant. There have been all-female forest crews since the 1920s, but in the US only 2% of firefighters are women. Los Angeles Mayor Eric Garcetti promised that by 2020, 5% of the LAFD will be women; currently that’s 3.5%. I’m not being sexist when I refer to my wonderful childhood heroes as men.

An owl lands on the beach; a coyote limps on singed foot pads, showing no interest in a fleeing rabbit. A firefighter staggers in the wind.

The fires have always been unpredictable and terrifying, but they have moved into a new dimension. The Paradise fire has set records, but the recent Woolsey fire that flew to the beach in west Malibu, bad as it was, isn’t up to today’s standards. In 1970, the Santa Ana, blowing at 80 miles an hour and gusting to twice that, drove a 30-mile wall of fire from Newhall to Malibu. First we heard it mentioned on the news, and then it was barreling over the mountain so quickly that we barely had time to load up the animals. It did take out the Spahn Ranch, where Charlie Manson and his crew lived (no comment), but also the iconic Serra Retreat, a real loss. That fire was a record-setter then, but it isn’t even in the top twenty these days.

I recently visited friends in Santa Barbara and finally saw firsthand the incomprehensible destruction in the path of the fire and floods of last year. One friend, a real estate agent in Montecito, one of the most idyllic places on earth, said that he is having a tough time determining if business is slow because of interest rates or because buyers are afraid to invest in multi-million-dollar properties threatened by fires and rushing mud. We drove through the slide area: Geologists are still calculating how much the mud (A Look Inside the Montecito Disaster Probe), the consistency of honey and traveling at up to 27 miles an hour, was needed to launch “giant boulders” down the washes.

Thank you, always, to the fire crews, both the pros and the inmate volunteers making $2 a day (and $1 an hour when they are fighting active fires) – may many more go on to join Cal Fire; to the California Highway Patrol – you haven’t lived until a CHP yells at you to “gun it” in order to get over a smoldering divider; and to the migrant farmers who kept working in the fields through the smoke.

My job during the fires was always to drag panicked horses out of their stalls and onto the beach. They really do run back into burning barns. To give you an idea what it’s like, during the Newhall-Malibu fire I was pulling a mare across the sand when I noticed I was stumbling inexplicably, or so I thought. I looked down at my foot, now in slow motion, which was sitting on a board. I picked up my foot and the board came with it, held by a large nail that I couldn’t feel. A stranger ran over, said “It’s okay to scream,” pulled the board off, and raced me across the sand to the vet’s office. I got a tetanus shot and no other treatment. There was no time for that. And mine was just an ordinary fire experience.

No horses were lost in that canyon, but we feel a bit like those horses right now. We’re not a political newsletter, and this is one of the most divisive topics in our country right now. Voicing these opinions could lose subscribers, but we are willing to take that risk. We all have different opinions and want to hear yours.

The optimistic approach is the one that takes steps to slow the climate changes that produce increasingly heavy weather and the historic droughts that make devastating fires more likely. Stephen Pekar, who runs the paleoclimate research lab at the City University of New York, among his many other activities, notes that climate changes are now taking place between 100 and 1000 times faster than they have in the past. To get to the point of taking steps to curb climate change, we have to change the conversation. The risk is asymmetrical – didn’t that Schopenhauer guy have something to say about that? While it’s true that there have always been dramatic shifts in climate, the drivers of those shifts can be measured, and they do not fully account for what we are seeing. We all need to know what the cores drawn from the Greenland ice sheet are telling us. That key research is beautifully chronicled in Richard Alley’s Two-Mile Time Machine (https://www.amazon.com/Two-Mile-Time-Machine-Abrupt-Climate/dp/0691102961). Otherwise we have only opinions.

There are tremendous opportunities in the renewable energy sector, jobs that would help balance the increasingly unequal opportunities available to our working classes. For renewable sources to really take off, we’d have to drop subsidies for the fossil-fuel producers and let the markets work. When the mechanization of our farms sent farm work tumbling from something like 30% of the workforce to the current 1–3%, depending on how you jigger the numbers, the transition was largely enabled by the war effort. Workers were moved from the farms into the factories, and much of what they made was battle-related. Had they been left in the rural areas to fend for themselves, as so many of our machinists have been, what would have happened? Of course, we’d advocate for a green-energy rebuild and retrofitting, not more weaponry, and the tools are ready at hand.

Frank Nutter, head of the Reinsurance Association of America, told writer Eugene Linden a quarter of a century ago that “global warming could bankrupt the [reinsurance] industry.” Linden also points out that while the Insurance Information Institute was singling out Florida as having the greatest exposure to the combined effects of a changing climate, Governor Rick Scott and Senator Marco Rubio went on record to dismiss the threat.

Cargill’s Gregory Page agreed to be on the board of bipartisan Risky Business, which aims to put a price on all of this. You can tell he doesn’t like being there, and good for him for stepping up. He did say he was willing to do so only because the outfit aims to document risks, not look for solutions. Whatever, but he did add that in agriculture the “threat of long-term weather-pattern changes cannot be ignored.”

The IMF produced a 2015 report (https://www.imf.org/en/News/Articles/2015/09/28/04/53/sonew070215a) showing that around the world fossil fuel subsidies amount to $5.3 trillion, or 6.5% of world GDP. Climate-minded economists reckon it would take 1% of world GDP to devise and implement remediation. But that $5.3T amounted to more than total health spending of all the world’s governments at the time. Apparently, the IMF rechecked their work when they saw their results, and we rechecked ours. (Read that again if you need to.)

Around the world we’re using big tax dollars to support a backward-looking sector, making it harder to implement programs tailor-made to get us beyond stagnant wage growth of our middle classes. Although fossil fuel operations lift wages in a slim tranche of well-paid workers, they are not engines of job creation. Green projects, whether they be high-tech explorations or muscle-power retrofits, create jobs that pay well, and retrofits are labor-intensive. They also offset municipal costs for heating and cooling, and cutting back on the time we spend stuck in traffic jams would raise productivity. There’s a lot more data; but as long as people see climate change as an ideological battle, data do not help much. We’ll be happy to send links; just email Philippa: philippa@panix.com

Cue in the creative destruction of a true market economy.

Here is the link to the latest US government report on climate change. We recommend perusal with and open mind and a willingness to alter views: Fourth National Climate Assessment, Volume II: Impacts, Risks, and Adaptation in the United States, https://nca2018.globalchange.gov.

For more information on how to join us in this important conversation at the January 25th GIC-USFSM conference, please visit www.usfsm.edu/climate. 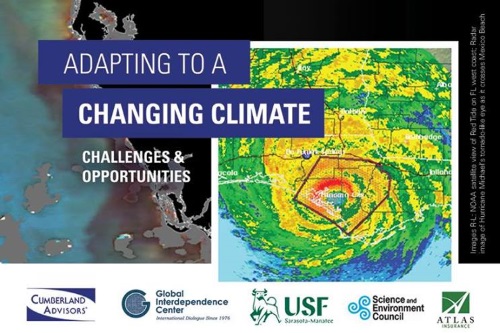