Jobs and the Fed

Markets posted a loss in the first week of January, driven by several factors and data releases. Release of the FOMC’s minutes for its December meeting led market participants to believe that the Fed was even more likely to embark on removing its policy accommodation sooner rather than later. Then there was the jobs situation. The JOLTS (Job Openings and Labor Turnover Survey) data for November implied a strong labor market, in that the number of job openings (10.6 million) continued to decline and overall exceeded the number of unemployed people (6.8 million). Furthermore, the number of people separating from their current jobs increased by some 382,000 to 6.3 million. With the number of job openings exceeding the number of unemployed people, the fact that people were leaving their current jobs suggested that they were doing so to seek better employment opportunities rather than simply being laid off. 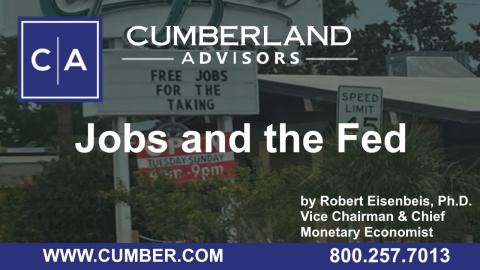 This jobs situation led forecasters to believe that job creation in December would be very strong. Bloomberg’s survey of economists forecast 450,000 jobs for December, while ADP’s December forecast called for 807,000 jobs. Both forecasts were off by a substantial margin, since the Bureau of Labor Statistics said that only 199,000 jobs had been created but modest gains were posted in all the major categories but Lodging.  As the chart below shows, that number of jobs added was smaller than the revised number for November. 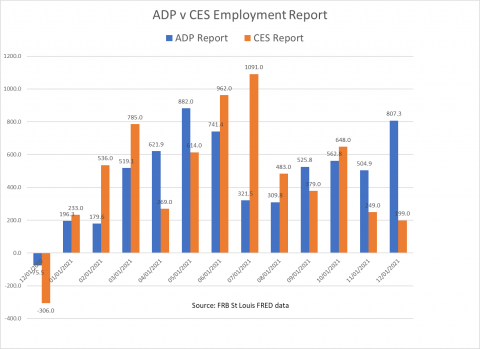 Indeed, the Bloomberg survey was off by a factor of two, and ADP’s forecast was off by a factor of four. On the positive side, the unemployment rate dropped from 4.2% to 3.9%, but the unemployment rates for African Americans (7.1%), Asians (3.8%), and Hispanics (4.9%), who are a focus of concern for the FOMC, were essentially unchanged in December from the previous month.

Review of the minutes of the December FOMC meeting showed that the Committee not only addressed current economic conditions but also discussed how to reduce the balance sheet and what a return to a more normal policy environment might look like. Four things stood out here. First, not only is the size of the balance sheet much larger than it was the last time the Fed started to reduce its balance sheet; but also, the weighted maturity structure is shorter, which means that a runoff would be faster than in the past. Second, the Committee expressed a preference for relying upon its interest rate target as the primary tool for policy in the future, mainly because the channels are better understood. Third, there was a preference for predictability as to how the Committee’s actions would proceed, to remove uncertainty as far as markets are concerned. Finally, the minutes noted that the economy was much stronger than the last time the balance sheet was reduced, which might reduce some risks.

As for the policy discussion itself, both the staff forecasts and projections submitted by participants saw strength in the economy but less strength than they saw at the last meeting, with the risks being to the downside. The Committee saw labor markets continuing to strengthen and noted some increase in the participation rate. Inflation remains a concern, and there was agreement that the Committee’s inflation objectives had been met. Some saw the improvements in labor markets as nearing the Committee’s employment objectives as well. It is likely that these observations were partly behind some commentators’ conclusions that a policy change could be imminent.

Despite the more positive tone of the minutes, the FOMC approaches its January meeting with heightened concern about the Covid pandemic. The recent surge has clearly dampened a lot of people’s plans and postponed efforts to return to normalcy. My colleague David Kotok, in his commentary last week (“The Fed & Markets,” January 6, 2022, https://www.cumber.com/market-commentary/fed-markets), laid out very well a number of issues that highlight the problems the FOMC faces as it attempts to engineer a soft landing. Those issues include what the Fed does and doesn’t know about policy channels, about inflation, and about how big its balance sheet should be, just to name a few. That piece is well worth reading again.