JOLTS, Jobs, and the Fed

The recent BLS release of the Job Openings and Labor Turnover Survey (JOLTS) data for May, combined with the weekly new claims for unemployment insurance and Current Employment Survey (CES) employment report, provides some snapshots of conditions in the labor market. The Fed surely would have liked to have had the May JOLTS data when it met in mid-June. The numbers show that the labor market was tight going into the FOMC meeting and affirm that there was little change in the fact that there were some 9.2 million unfilled jobs as of the end of May. This number matches what the new claims data told us, which is that there is now one job opening for every unemployed person. 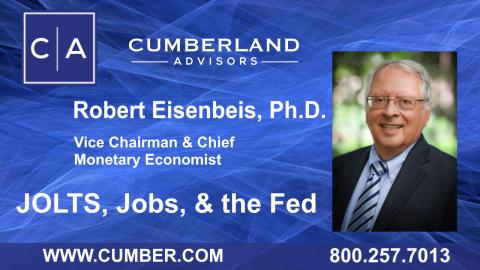 One explanation for the fact what there are as many job openings as unemployed people is what we economists call “frictional” unemployment? Frictional employment exists when there are mismatches between the skills of existing workers and the skills needed by employers. For example, an employer may need a computer tech specialist whereas a job seeker happens to be a nurse. Or a job vacancy is posted in one part of the country, but a qualified worker lives somewhere else. Others, see a more complex picture and offer additional hypotheses about the current job vacancy situation. Three common explanations exist. First, people needed to take care of their children during the pandemic, which forced one or more parents to quit working. Second, some people who were unemployed during the pandemic are reassessing their career choices and are making needed changes. A personal example here may illustrate the kind of reassessment people are doing. Our daughter was employed in retail for many years, but the pressure of online sales and changing demands were the handwriting on the wall and forced her to reassess her career.  That, combined with being furloughed at the start of the pandemic, caused her to make a complete career change. Fortunately, she had also taken courses to update her skills for the career change she wanted to make, and she was hired shortly after being furloughed. Third, some assert that generous unemployment benefits have enabled people to postpone job hunting, and in some instances to update their skills. Here the research evidence is mixed, especially for people who have faced the choice between unemployment or employment with benefits.

In the FOMC minutes, which were released this past week as well, it is clear that the Fed understood much of this. The minutes noted that while employment had increased solidly, increases were lower than earlier in the year. The unemployment rate edged down to 5.8% in May, as did new claims for unemployment insurance. The JOLTS data, not surprisingly, verified the comeback in the leisure and hospitality industry, which reported an increase of 109,000 job openings in May. This increase supports what we saw anecdotally with the plethora of hiring signs and the increase in the number of people eating out and beginning to travel as summer commenced. At the same time, the pattern was irregular, with job openings declining in the arts, entertainment, and recreational sectors, as well as in education and government. More recent data from the BLS Current Employment Survey show that the economy added 850,000 jobs in June, with more jobs being created in leisure and hospitality, and also in entertainment, education, and retail trade. Clearly, these trends suggest improvement in some sectors that had been adversely impacted by the pandemic. However, the jobs situation remains uneven, and we will surely see that reality reflected in subsequent JOLTS data releases, even though the data are backward-looking.

There was otherwise little new in the Fed minutes. The report did begin with a continuation of the FOMC’s discussion at its last meeting of proposals to establish two permanent repo facilities, one for primary dealers, and later for interested banks, and a second one for foreign central banks. The facilities were rationalized as potentially useful backstops to other policies while removing the stigma of borrowing at the discount window. One can speculate that behind this proposal is concern that the growing federal deficit and a potential further increase in Treasury debt just as the Fed starts to normalize its balance sheet, will result in large holders of US Treasuries having trouble financing their positions, thereby causing disruptions in short-term money markets.

After describing the repo proposals, the minutes turned to a discussion of economic conditions. Here, the staff forecast was more positive than previously, as were the SEP projections provided by participants. Interestingly, the staff saw risks as being slightly to the downside, due in part to uncertainty about the impacts of the more contagious strains of the virus. In terms of the participants view of the economy, the Committee saw expansion at a rapid pace, mostly because of expanded demand. The most telling comments expressed were that inflation was expected to rise above the 2% target and that, presently, the increases had exceeded expectations. Like the staff, participants viewed the inflation situation as transitory; but aside from pointing to bottlenecks in the supply chain, the minutes were remarkable devoid of actual evidence as to what specific price increases were or were not seen as transitory.

It wasn’t until the conclusion of the minutes that the discussion seemed to turn to the asset purchase program, and there was little in the discussion to support the amount of attention that the issue got in the press or among market participants. But, for the time being, that discussion was pushed off in favor of waiting to assess whether the Committee’s goals for inflation and full employment have been achieved.