As tensions rise from the movement of Russian forces into Ukraine and we contemplate Russia’s international ambitions, it might be useful to look at where Russia stands in the world today economically. (My colleague David Kotok wrote on Thursday, Feb. 24, describing Ukraine’s important productive sectors.) We hear a lot about Russian energy production, since in 2020 the country was the second-largest producer of natural gas (17% of world production) and the third-largest producer of oil (12% of world production). That production is down by 11% and 8.7% respectively more recently. Disruption to those supplies could have large consequences for users of Russian energy, mainly in Europe but also across the world. 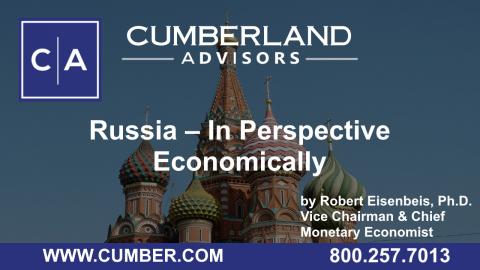 Should Russia cut off energy supplies in response to sanctions, which were just increased significantly by President Biden and US allies, then what would happen to the Russian economy? First, we need to look at the Russian economy, how big it is, and how dependent upon energy sales it is when it comes to GDP.

Compared to most of the economies of Europe and the US, the Russian economy is extremely small. The following table compares Russian GDP with that of major European countries and the US. 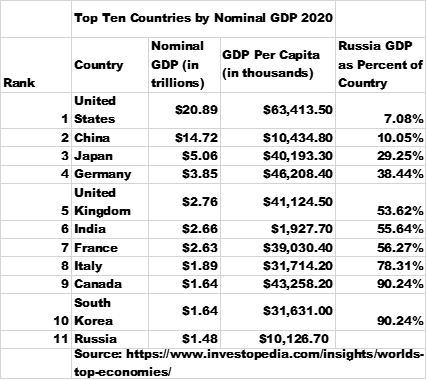 We can see that the Russian economy is minuscule when compared to other major economies. It is only 7% of the US economy in terms of GDP and much less than half the size of each of the larger European countries’ economies. Additionally, Russia’s productive capabilities on a per capita basis are low relative to other developed economies. Given the size of the US economy, it is interesting to compare Russia’s economy with that of individual states. The Russian economy at $1.48 trillion is smaller in terms of GDP than three US states — California ($2.45 trillion), Texas ($1.8 trillion), and New York ($1.68 trillion). And none of these three states spend money on maintaining a military, a nuclear arsenal, nor sustaining an attack on a neighboring state.

The following table shows that at present the US spends about $778 billion on military expenditures, or about 3.7% of GDP. This compares with $61 billion by Russia, or only about 8% of what the US spends each year. So, while Russia may have amassed an army and nuclear arsenal, it can’t match the investment the US has made in its military. 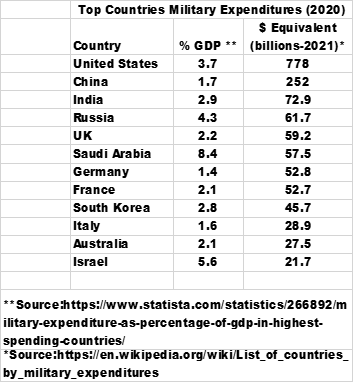 These comparisons bring us back to energy and the impact that sanctions may have on Russia should sanctions target that key sector. In terms of exports, Russia’s exports consist mainly of energy — oil and natural gas — and wheat. In total, in 2021 the country exported $110.2 billion in crude oil, $68.7 billion in petroleum products, and $61.8 billion in gas (including LNG), for about 90% of total exports. (https://www.reuters.com/markets/europe/russias-oil-gas-revenue-windfall-2022-01-21/) Except for energy, Russia’s trade is insignificant in world markets. To put those numbers in perspective, in 2020 the US exported $123.7 billion in energy products, while at home consumption of energy accounted for more than $1.2 trillion. In terms of who is dependent upon Russia’s energy exports, Russia supplies more than a third of Europe’s total imports, and countries most dependent on Russia are Germany (49%), Italy (46%), France (24%), and Greece (39%) (https://www.statista.com/chart/26768/dependence-on-russian-gas-by-european-country/). These countries would clearly be most negatively impacted by a cutback in energy from Russia. This dependency helps to explain why President Macron went to Russia, and it makes the German decision to hault Nord Stream 2 even more significant.

What we are looking at here in terms of Russian actions is an effort by a relatively small country trying to use military action and threats, backed up by a nuclear arsenal that can in no way compare in terms of resources to those it is threatening. At some point things will have to give, and strong political and economic sanctions will have an impact. Certainly, the loss of the loss of the Champion’s League football final that was to be held in St. Petersburg, and sponsored by the Russian oil company Gazprom is a political black eye as a start. As an aside, it is also the case that five football teams in the UK and Europe are presently owned by oligarchs. They will likely not be happy about the public relations or financial hit if their ownership is terminated.

But estimates are also now coming out that the sanctions imposed on Thursday will also have a numbing impact on the Russian domestic economy. The Russian stock market on Thursday declined more than 40%, and sovereign bond rates have skyrocketed to over 15.5%, pushing market values to zero. Some have claimed that Russia has stockpiled gold and foreign exchange reserves, but for those reserves to be useful there has to be a way to change those assets into meaningful currencies. Major Russian banks are now cut off from access to dollar, euro, UK pound, and Japanese yen markets in the US, the UK, and Japan. The combined impacts of these sanctions on the small Russian economy will likely be and significant and widely felt.