Soft Landing in View? So Far So Good

The FOMC began raising rates at its March meeting, by 25 basis points, and followed in May with a 50-basis-point increase, then began frontloading its policy tightening by 75 basis points in June and another 75 basis points in July. Markets became concerned that the Fed might cause a deep recession, and many critics both in Congress and elsewhere were sure that unemployment would skyrocket and growth would tank.

We have had about five months of policy tightening by the FOMC; and now, because of the lag effects of policy, incoming data are becoming more and more likely to reflect the effects of that tightening on actual behavior as well as on expectations. So far there has been virtually no impact on inflation, although we have inflation data only through June for the PCE and July for the CPI. The following chart shows that there was a very slight dip in CPI; but the path for PCE is not clear, and it is important to recognize that one data point doesn’t necessarily imply a trend. 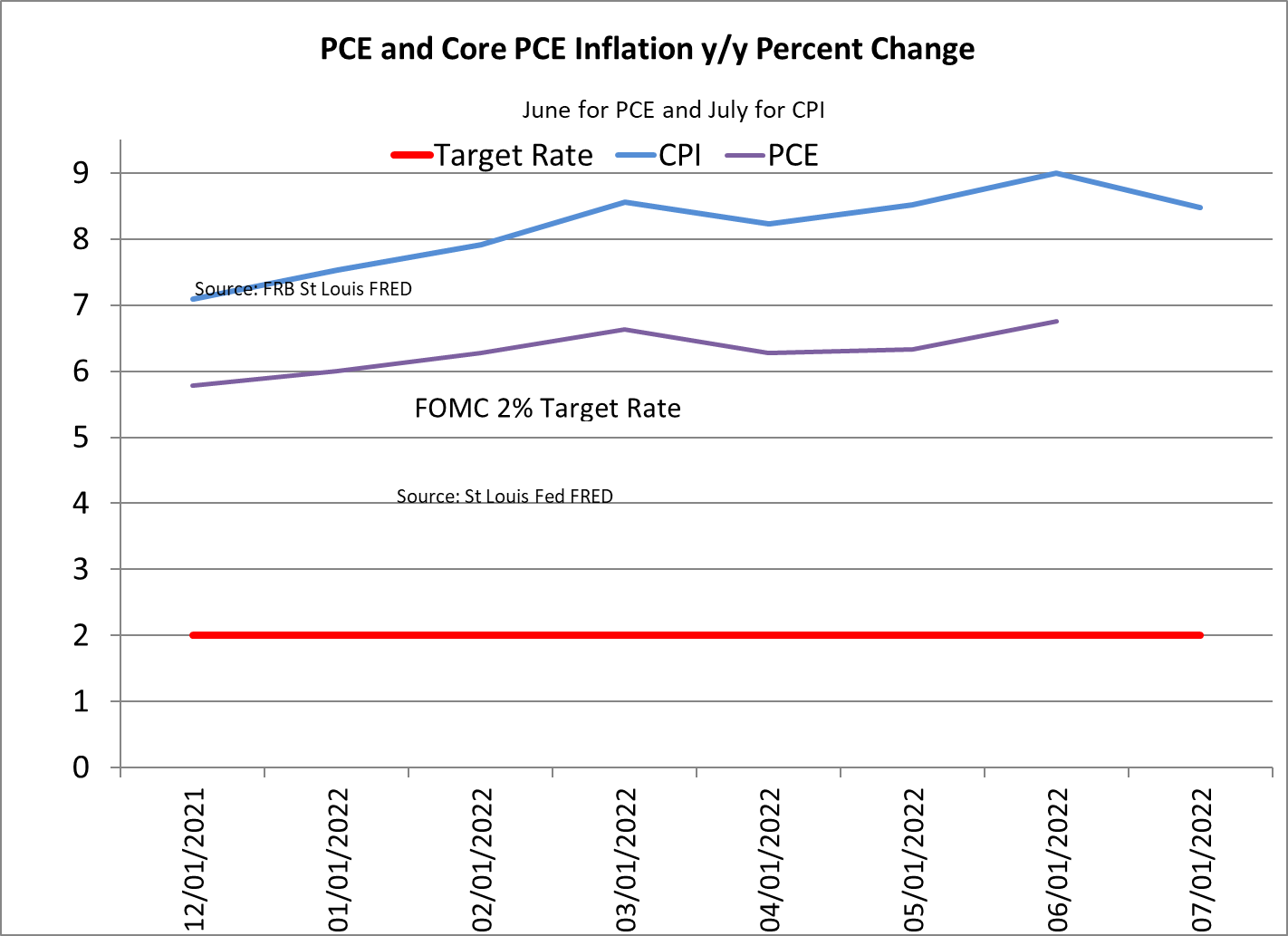 Like the inflation numbers, data on growth are also only available with a lag. So we have numbers only through the second quarter, when the rate hikes were modest at 25 basis points in March and by 50 basis points in May.  As the next chart shows, growth slowed by 1.6% in the first quarter and by only by 0.6% in Q2. 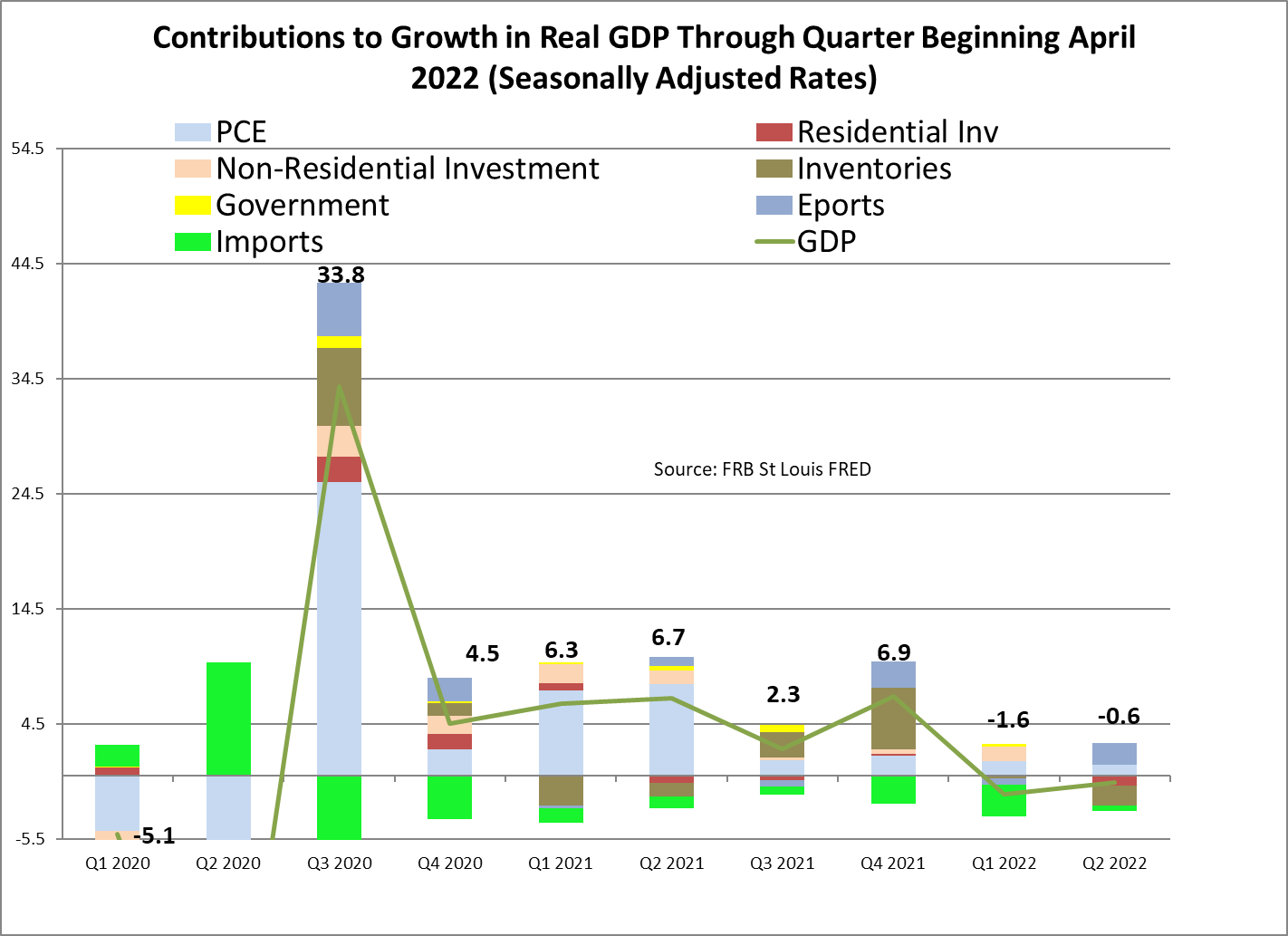 The causes of the slowdown were different in each quarter, however. Net exports accounted for most of the decline in Q1, with imports exceeding exports by a wide margin, whereas inventories declined in Q2 as stores dealt with the fact that they had overstocked their shelves as retail sales growth continued to decline. Anecdotal information suggests that the inventory adjustment continued in Q3. Similarly, residential investment was flat in Q1 and declined in Q2. Incoming data suggest that higher rates have dampened demand further — housing sales are off 4.8% in July.

While the economy is slowing, it shows few signs of the catastrophic decline that some have predicted. Nor are current labor market conditions close to indicating the kind of decline that Senator Warren and Larry Summers are projecting will result from the Fed’s current policies. 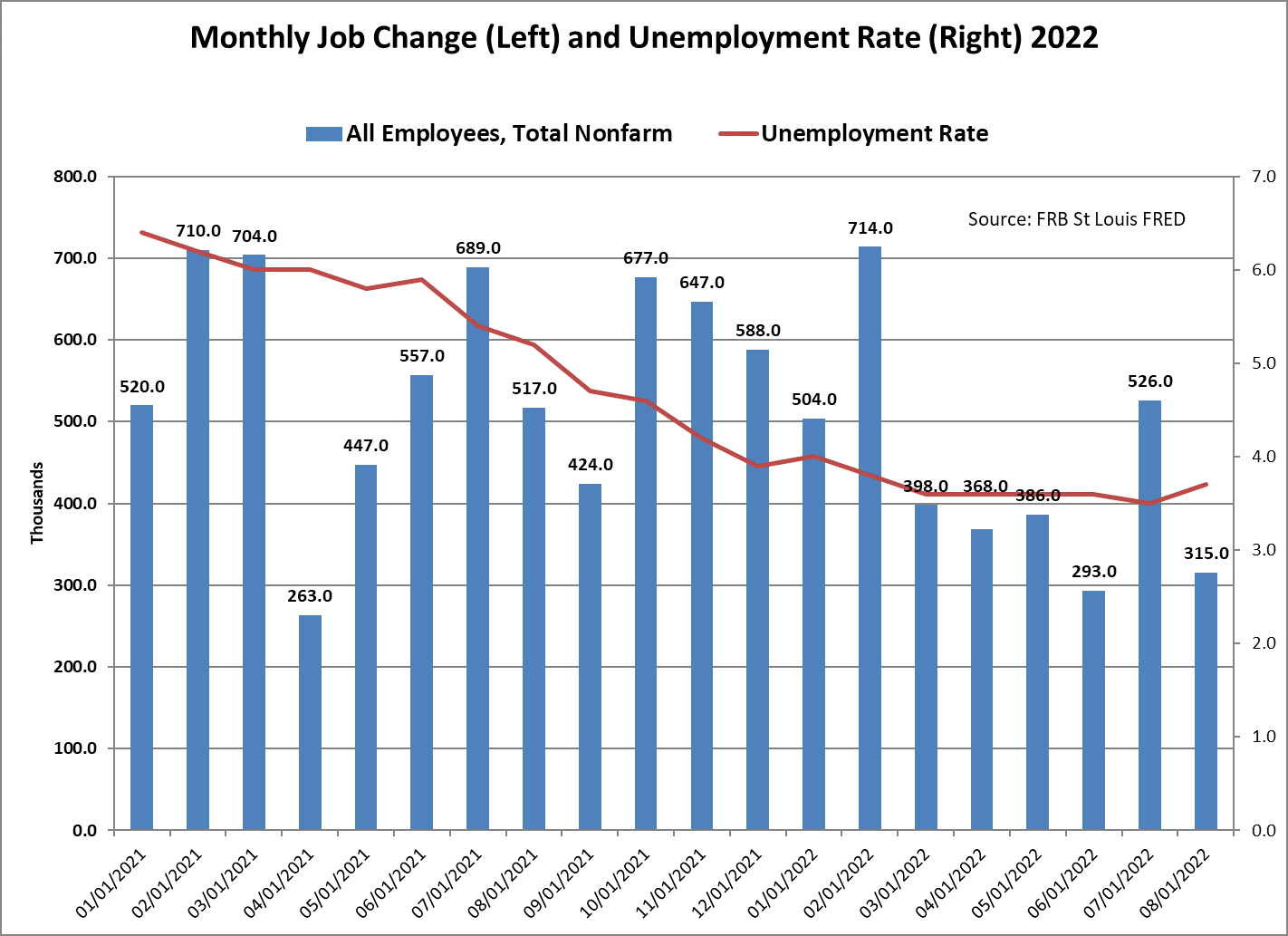 In August, the civilian labor force increased by 786,000; and, as the chart above shows, the economy created 315,000 jobs, down from 526,000 in July but well above the monthly averages in the two years preceding the pandemic. The largest gains were in services, retail trade, professional and business services, and education and health services. The unemployment rate ticked up from 3.5% in July to 3.7% in August but is below what the FOMC considers as full employment. More and more people are entering the labor force, and the participation rate increased from 62.1% to 62.4% in August. Most of that gain is from women re-entering the labor market. The participation rate for women in August now stands at 57.1%, compared with the recent low of 56.1% in August 2021.

To summarize, there is now slight negative growth in the economy through the first half of the year, when policy tightening began. Inflation is well above target but may be starting to decline or at least stabilize. The labor market remains healthy, and there is little sign yet that disaster scenarios are currently in train. It is not clear whether the Fed will achieve its soft landing, but the downside risks are not diminishing. The war in Ukraine is ongoing, and the disruptions to energy and agricultural shipments remain significant. We continue to experience international disruptions to trade flows and supply chains. There have also been disruptions to the world payments systems. Finally, there is a strengthening bipolar world political structure between the West, led by the US, and the East, led by China/Russia. All these factors pose important downside risks. It is clear that the FOMC has a tough job ahead as it seeks to engineer a soft landing.