Let’s see. An American company with American employees catches fish. It ships the fish to China. China imposes a tariff or retaliatory tariff when the fish arrives from America. 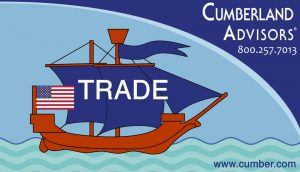 A Chinese company processes the fish and creates frozen fish sticks. The company in China is an American investment, and the labor in China is available at low cost. The American company cannot find that labor force in America even if it is willing to pay a much higher wage cost than it pays to employ Chinese workers.

The frozen fish sticks are shipped back to America. The US imposes a tariff or retaliatory tariff.

You go to the supermarket and buy the frozen fish sticks. The price is higher. That is all that has changed in the fish stick business since the trade war began. Note that American fish exports approximate $1 billion a year.

Folks, tariffs and retaliatory tariffs like this amount to a sales tax imposed on the American consumer and a penalty imposed on American companies with American workers.

Peter Navarro, trade war adviser to POTUS, please explain this policy that you are scripting in the name of the national security of the United States.

Readers, ask your congressional representative and your Senator why they have delegated their congressional responsibilities to POTUS. Raising tariffs and taxes is a job that historically belongs to Congress. Letting a POTUS, any POTUS, impose tariffs unilaterally under a dubiously broad definition of “national security” seems a little fishy to me.

For details on the tariff impacts on the fish industry, see “Fish Caught in America, Processed in China Get Trapped by Trade Dispute” (https://www.wsj.com/articles/u-s-seafood-industry-vulnerable-to-tariffs-aimed-at-china-1533812400). The whole story of tariff impacts on food production and on consumers is, of course, much broader. As China Daily recently tweeted, “US farm sector will suffer greatly due to the loss of the huge Chinese market.” (See tweet and attached video report: https://twitter.com/chinadailyusa/status/1028090398160314368?s=11.

Trump is, of course, zapping the world with tariffs like a sorcerer’s apprentice, drawing upon powers he believed to be vested in him by the sorcerer’s hat of Section 232 of the Trade and Expansion Act of 1962. Section 232 “allows the president to adjust imports without a vote by Congress should the Department of Commerce find evidence of a national-security threat from foreign shipments.” (See https://www.bloomberg.com/news/articles/2018-05-24/trade-as-national-security-issue-here-s-the-u-s-law-quicktake.) Defining all sorts of things as matters of “national security” broadens the president’s powers far beyond the likely intentions of those who enacted the act in 1962, and it supplants the role of Congress.

There is at least one substantive effort afoot to ensure congressional oversight of the president’s use of Section 232: https://www.rollcall.com/news/politics/corker-unveils-plan-give-congress-power-stop-trump-trade-actions.

As the Trump–Navarro trade war heats up and its impacts widen, Bloomberg reports trouble on a different front: “Walt Disney confirms that its Winnie the Pooh movie Christopher Robin has been denied release in the world's second-biggest film market” (https://bloom.bg/2MhiX1e). We leave it to readers to decide whether the banning of the film has to do with the trade war or perhaps with memes likening President Xi to Winnie the Pooh.

My point is that trade war has many dimensions. It is hurting American business and costing American jobs and raising America’s consumer prices. It is a failed policy crafted by POTUS’s trade adviser Peter Navarro, who is seen by many as a fringe and extreme economic professional. His early forecast and his promises for this Trump policy are being proven wrong by outcomes, as we now have the US facing growing dislocations.

But will Navarro have his way? Bloomberg reported that Mnuchin and Kudlow and Lighthizer were in the last negotiation with Chinese, and Navarro was not in the room. He was huffing loudly outside:

“Tired of the confusion, China asked the U.S. for one person with whom to negotiate economic matters. Trump designated Mnuchin to be the point person, which, according to multiple sources, was fine with Chinese officials, who preferred dealing with the moderate Treasury secretary. But in May, when Mnuchin traveled to Beijing for negotiations, Trump also dispatched Ross, Lighthizer, Navarro, and Kudlow to accompany him. (A Treasury spokesman says Mnuchin asked Ross and Lighthizer to join.) Predictably, there were tensions within the U.S. delegation. A White House official says Mnuchin and Navarro argued repeatedly, including in rooms where the Chinese could hear them.

One senior official characterized the conflict between Mnuchin and Navarro over US trade policy with China as “a terrible mess,” according to a May report in Politico: https://www.politico.com/newsletters/morning-money/2018/05/17/navarro-situation-a-terrible-mess-221249.

These reports suggest that Navarro could soon prove a casualty of his own failed policy, and that Trump will soon alter the trade war bellicosity as he realizes that the collateral damage threatens the Republicans in the midterm elections. Meanwhile, trade war effects continue daily and will show up soon in macro numbers. Our hunch is that US GDP, profits and earnings growth rates peaked in Q2. We have a cash reserve in US ETF and US core ETF portfolios.