This Time Is Different

As we at Cumberland expected, the FOMC left its target rate unchanged at 0%–0.25% and made only a small adjustment to its asset purchase program, cutting its purchases of Treasuries to $20 billion and purchases of mortgage-backed securities to $10 billion per month. The Committee also reaffirmed its previous “Statement on Longer-Run Goals and Monetary Policy Strategy” and put forward a bland set of principles to follow in reducing its balance sheet, affirming its intention to hold only Treasury securities in the System Open Market Portfolio. In contrast, the press conference was notable for three clear themes that went farther on several policy dimensions than previous press conferences did, if one listened carefully. 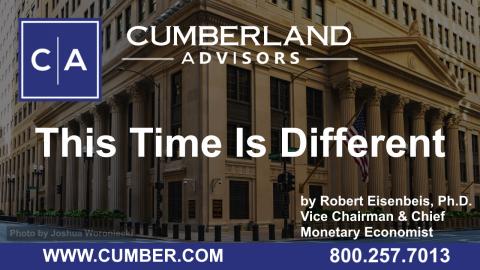 The first theme emerged when Chairman Powell was queried about the timing and pace of policy moves. He clearly indicated that policy considerations this time were substantially different from those in play when the FOMC embarked upon a tightening in December 2016. Then, real GDP growth was under 2%; PCE inflation was 1.3%; and the unemployment rate was 4.6%. But this time, Powell noted, inflation is at 7%; unemployment is arguably at potential at 3.9%; and economic growth forecasts for Q4 of 2021 are in the 5–6% range. Labor markets are extremely tight, but Powell did see inflation moderating in the second half of the year as supply chain disruptions are moderated. This set of facts makes one wonder why, as some have argued, the Committee has waited to change policy, and helps to explain why one reporter asked whether the Committee was already significantly behind the curve, which Powell denied.

For the second theme, Powell provided much more detail on how the FOMC will approach the policy problem in 2022 and how it will adjust its policy tools. He indicated that the FOMC is likely to both raise rates sooner rather than later, and more than once, but he declined to indicate that this process would start in March, as some are now claiming with happen then. In fact, he said that there was little discussion of the likely paths and that by March there would be a new Summary of Economic Projections to provide better focus on that issue. He did indicate that asset purchases will cease in March and that the Fed will begin to shrink its portfolio later in the year, but also that no firm decision has been made on the latter.

A third theme, or rather policy issue, arose when a reporter asked whether, since inflation is significantly above target now, the Committee will keep rates high to drive inflation below its 2% target for a period of time. Powell indicated that there is no intent to drive inflation below 2%; but, rather, the goal as he sees it is to keep inflation expectations well anchored at 2%. He seemed to have forgotten that the FOMC is targeting average inflation, which would require rates to be below target for some time if the average is to be held at 2%. Does this mean that the average target has been abandoned by the Committee, or at least by Powell? None of the reporters picked up on this nuance.