50 Years of Inflation & The Fed

During 50 years of Cumberland’s history, we have observed many types of inflation cycles and witnessed various responses by the Federal Reserve and the federal government. We’ve seen attempts at “jawboning.” Those didn’t work. Cheerleading — the WIN button (Whip Inflation Now). That didn’t work. Wage and price control attempts. They didn’t work. 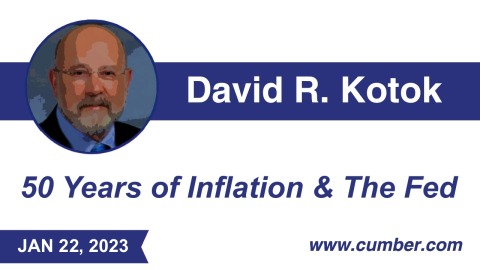 The causes of inflation were many and varied, always debated with plenty of finger pointing. Clarity usually emerged only after the event and after time for serious economic research. A partial list of the alleged causes of inflation includes supply shocks, demand shocks, war, deficits (or not), guns-and-butter policy, embargoes, government interventions, government’s regulations, the Bretton Woods fixed-currency regime’s demise, labor relations failures or strikes or labor force strife like sickouts or “blue flu”, a weaker dollar, a stronger dollar. The finger pointing could fill a book from title page to index.

Here’s a chart from FRED (St. Louis Federal Reserve Bank) showing the history of the Consumer Price Index since the end of the World War 2 period.

I remember many of those specific prices. So do older readers of this commentary.

A one-cent gumball machine. A five-cent cigar, a five-cent Coke, a five-cent ice cream cone. A $4000 car, a $40,000 suburban neighborhood home, an 11-cents-a-gallon delivery of heating oil. Think about all the prices you can remember and when they occurred.

Since antiquity, changing prices and specifically rising prices have been a social issue. We tend to think of the changes as occurring in a single price or a basket of single prices. Gasoline is one of the most noticed prices because most of us see it every day.

But, collectively, all those prices make up the price level. And while we go about our daily lives buying and selling things and services at this price or that one, it is the collective price level that is critical for policymakers and for the societal changes that the price level can drive. This is why the Federal Reserve’s 2% inflation target is so important.

When the price level changes slowly, it tends to become accepted as a gradually rising price trend, accepted with only very mild changes in people’s behaviors. 2% inflation doesn’t trigger much borrowing and buying in anticipation of a rising price level; hence, money multipliers are not very distorted by the persistent very low level of inflation.

Example: A compounded 2% inflation rate on the entire price level doubles the price level in about 36 years. So if your income is rising at about the same rate, or if your wealth is increasing at about that rate, the societal impact of that low inflation rate doesn’t alter many decisions. At least not in meaningful ways. Try testing yourself by recalling various prices 36 years ago and constructing a weighted personal expenditure index of all the stuff you bought during the last 3.5 decades. Don’t forget to adjust for quality improvements. Would you rather have the cheaper-priced open heart bypass operation of yesteryear or a drug-coated stent today?

But what happens when the rate of inflation for the entire price level is higher? We could analyze this exactly, but instead we will use the simple rule of 72 so that any reader can get close to the correct number. If you divide 72 by the compounded inflation rate you choose, you will have the approximate number of years it takes to double the price level. For example, a 3% inflation rate instead of a 2% inflation rate moves (shortens) the doubling time from 36 to 24 years. 4% becomes 18 years; 5% is a little over 14 years; and 6% is 12 years. Think about this. If prices are doubling every 12 years, many things trigger advance purchases and borrowing to avoid paying a higher price in the future.

The Federal Reserve knows this. The Fed also knows that the higher the rate of change in the price level, the more embedded inflation expectations become. And that means the harder they are to suppress. The Fed also knows that the higher the imbedded inflation rate, the more people adjust their behavior because they expect prices to rise. And the corollary is that people begin to demand rising incomes to keep up with the inflation expectations. That is where the wage-price spiral theme kicks in.

Shorter-term shocks seem to cause people less concern because they don’t expect them to continue. Thus, an oil price shock is not welcome, but many believe it is temporary. The same is true currently for the price of eggs. We just tend to believe that the functioning of our market-based economy will supply more chickens who will lay more eggs, and after a time the price of eggs will return to something closer to what it was before the culling of flocks impacted by avian flu reduced the supply of egg-laying chickens.

This is where the monetary debate comes into play. Since we operate in a money economy and since we buy and sell at nominal prices with a current form of currency, we tend to believe that the provider of the money (whether cash or an electronic transaction) can continue to validate it in the face of higher prices; and therefore the burden of inflation control falls on the central bank. That is what we are seeing at work today. That is also what we have witnessed with the US central bank since William McChesney Martin was chairman (from 1951 to 1970).

Practitioners may comment that what I have written is very simplistic. They would ask that I distinguish between nominal and real effects, and they would add quantity theory of money references like M2 or M3. And they would invoke the famous equation of Irving Fisher or the seminal work of Milton Friedman. They would be correct.

In my view, the details of the mechanics of money and credit multipliers are not the issue now.

This Federal Reserve has declared a 2% inflation rate its target, and bringing the current inflation rate down to that target is its dedicated purpose. The Fed decision makers want to quash inflation expectations. They don’t want a repeat of one of the past inflation cycles that you see represented in the chart at the top of this commentary. And they don’t want to allow the number of years it takes to double the price level to become so short as to influence behavior.

With these parameters in mind, our outlook is for the Fed to raise rates again and again until it reaches a level (we guess 5% or so) that will suppress any embedded inflation expectations. In order to do that, the Fed will have to keep that 5% rate in place for a number of months or longer, until the expected embedded inflation rate is back to 2% and likely to stay there.

We don’t expect an early Fed pivot, even though many market agents think it is coming. We do expect the inverted yield curve to persist for some time. The intermediate- and longer-term interest rates are telling us that the Fed is credible in its policy position of staying with this 2% target. And they are doing it while we are witnessing a regional shooting war and a global financial payments and sanctions war and while we are facing various other shocks. We believe the Fed knows it cannot adjust policy too soon and risk a loss of credibility. That is why it is likely that the Fed will extend its tightening policy longer than is necessary. In real time, the Fed will not know when to turn policy in another direction until after the pivot point becomes apparent in the rearview mirror.

We've been doing this stuff for over 50 years. We remember a time when the Fed was totally opaque. No press conferences. No minutes released. Fed watchers were people who looked at the transactions in the Treasury markets following Fed meetings to try to figure out what the Fed was doing or was going to do.

Now we have a lot of Fedspeak instead of Fed silence. We have dot plots and minutes and pressers. And there are hundreds of experts who are busy telling us what the Fed will do or telling the Fed what it should do.

Look at the history of CPI in the chart above and pencil in all the events that have occurred over that time. No one could have predicted them before they happened. No forward forecast made at any time in the last half century has been accurate. The best anyone can ever hope for is to get close.

Our current view is that the Fed will aim for a 5% or so federal funds target rate and then pause for a few months or maybe for the whole year. Of course, any event can change that trajectory. So the best answer to the question, where will interest rates be a year from now or two years from now is “I don’t know.” That’s my best guess today, and I am prepared to change it quickly if needed.

As the great economist Yogi Berra said: “It ain't over till it's over.”