The well-known philosopher, catcher, and baseball manager (and good guy to all) delivered this immortal line in the middle of the 1973 season while managing the New York Mets. The Mets were well behind in the standings that summer, but they crawled their way back into the pennant race, won the division, and then the National League pennant before falling in seven games in the World Series to the Oakland A’s. 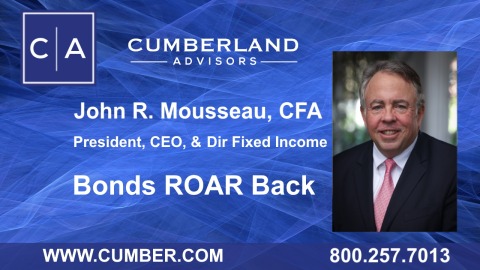 The bond market began its own comeback during the fall with the Consumer Price Index report of November 10th, reporting on October’s inflation. The 10-year bond yield stood at 4.20% on the Monday of that week. The release on November 10th showed that month-over-month CPI growth was 0.4 percentage points and that core CPI (less food and energy) was up 0.3 points. The key to that day is that both numbers were LESS than expectations (0.6 and 0.5 respectively). The bond market had been waiting for a while for an inflation number that would show a deceleration in monthly inflation, as surprise increases had kept bonds rising in yield through the second part of the summer and all through the fall into November. The report on November CPI, released on December 13th, reinforced the previous month, with CPI and core CPI rising by 0.1 and 0.2 percentage points versus expectations of 0.3 for both. Since November 10th, the yield on the 10-year Treasury has fallen from 4.11% to the current level of 3.67% after briefly touching 3.45% last week before concerns over the Japanese Central Bank’s (JCB) hiking of short-term rates pushed rates up somewhat. 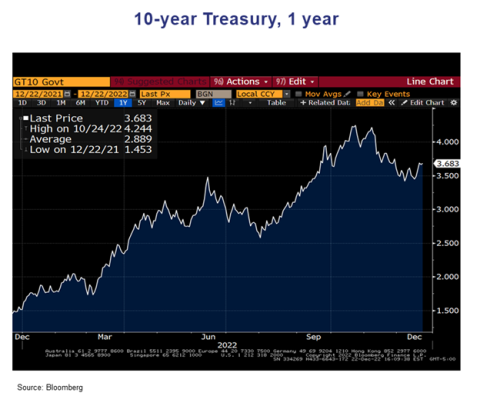 Longer-term municipal bonds have also seen a drop in yields. As we wrote last quarter, longer-term munis have really suffered this year from bond fund liquidations. A look at the graph below shows the severe level of outflows this year. 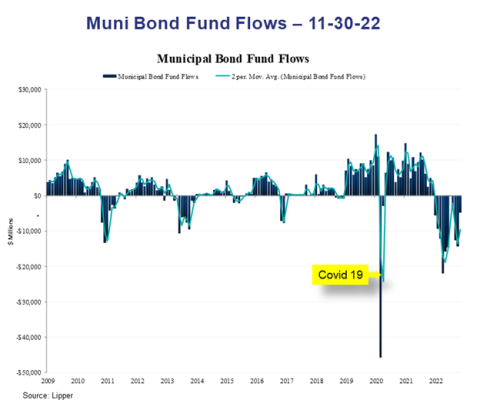 Even though we have seen MOSTLY outflows from bond funds, they have been reduced from earlier in the year; and in some cases the outflows have resulted from investors selling bond funds and buying individual bonds, which carry higher yields. Also, private money has moved significantly into the space since early November. 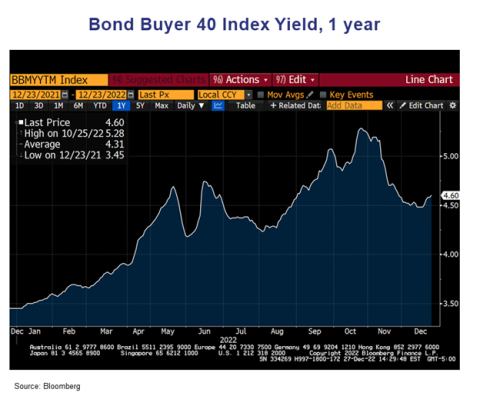 This is the chart of the Bond Buyer 40 yield to maturity. The Bond Buyer 40 is a long-maturity, primarily long-revenue bond index. Note that we started to see 5% long muni yields at the end of the third quarter; and as we wrote then, that was an absolute giveaway, in our opinion. The yields have now come down significantly, 'to where most longer muni deals, structured with par bonds, are priced in the long end between a 4.15 to 4.35 range, depending on credit and name, with bonds issued by state housing agencies yielding more. The drop is more extraordinary in the case of munis because of the tax exemption. Most of the time you need only about a 70% move in munis relative to Treasuries to equate to the same taxable-equivalent yield rise. But this year that advantage has been overwhelmed because of the bond fund selling. Well, it works in reverse, too. The very oversold long municipal bond rallied terrifically.

Where do we go from here? Munis are still cheap relative to Treasuries, though not as cheap as they were. That can be seen in the drop of the AAA muni to US Treasury yield in the long end. For 30-year paper, at the end of October, the ratio stood at 99%; and as of December 21st, it stood at 94%. Overall, we believe this is a good environment for bonds in general and munis in particular. The slowdown in inflation has helped. Municipal supply has also dropped — many issuers don’t need to issue debt, as their influx of sales tax, capital gains tax, and in many cases income tax revenues have risen during Covid. This additional revenue, combined with some of the federal money from Covid, has left a number of states and counties with surpluses. That influx will be in the rearview mirror as the economy starts to slow. And there are many signs that the economy is doing just that — slower housing markets, job layoffs, dropping commodity prices, etc. So it will be important to maintain high credit quality during the slowdown.

Most bond market selloffs of the magnitude we have witnessed this year are followed by reversions to the mean, and we think this will be the case going forward. Or, as Mr. Berra would say, “It’s like déjà vu all over again.”

We want to thank all our readers, and we wish you a joyous holiday season and a great 2023!